Native Plants in the Landscape

I spent part of last weekend in easternmost Pennsylvania, at the Native Plants in the Landscape Conference, in the university town of Millersville. This was the 20th anniversary of this ground-breaking conference, and I was thrilled to be invited back for the third time. Founder F.M. Mooberry, who was able to make an appearance, deserves major props for starting this conference long before most people were espousing the virtues of native flora in place of the over-used non-native ornamentals. 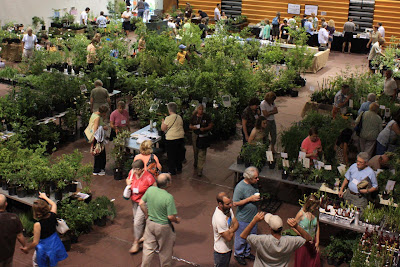 Photo by Sandy Seiwert
This conference attracts about 350 people every year, and a cornerstone of the event is native plant vendors. There are dozens, and they fill a gymnasium with their products. Sometimes, vendors of natives really don't seem to know plants all that well, and actually end up hawking non-natives. Not here. You'll not find a more sophisticated bunch of nursery people. The breadth of plant species available is awe-inspiring, and includes sedges, grasses, carnivorous plants, all manner of trees and shrubs, and scores of others. 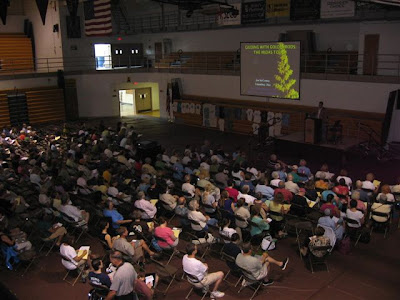 I gave the final keynote, on goldenrods. Often derided as weedy, this group is in reality one of our most important and interesting bunch of native plants. This is definitely a crowd of sophisticados, and speakers really should know their stuff. There are always many great questions that go far beyond the average depth of knowledge.

In a shameless bit of copycatism, the Millersville conference led to the creation of the Midwest Native Plant Conference right here in Ohio. The organizers of the Millersville show were actually thrilled when I told them we had started this one, as they want their efforts to be imitated elsewhere. Utilizing native plant species in even the smallest of suburbiascapes can yield dramatic and unexpected results, and many natives are in reality better looking plants than the non-natives that society has become so enamored with.
This year's Midwest Native Plant Conference will be held on the weekend of August 6 - 8, at the beautiful Bergamo Center in Dayton. There is a great lineup of speakers on all manner of topics, and featured keynotes are Julie Zickefoose, Wil Hershberger, and Judy Semroc.
Hope to see you there, and you can find registration info RIGHT HERE.
at June 07, 2010

If only I were still going to be in Ohio in August, because that sounds really cool!

What an excellent concept!

Thanks for the report from Millersville which is in my original neck of the woods.

I was in a greenhouse recently and they had a Japanese knotweed (Fallopia japonica) cultivar for sale. The message about invasive, non-native plants isn't getting around fast enough, but inroads are being made.