The little sheet of horrors

An innocent-looking sheet of tin, lying prostrate on a hill high above Ohio Brush Creek in Adams County. Seekers of creepy-crawlies love such things; for others, a couple of real horrorshows lurk beneath. We'll have a look in a minute, but first we'll hike up the hill through an interesting cedar glade prairie to get there.

Bare eroding shaley ground of an Adams County prairie. Botanists delight in such places, due to the abundance of unusual flora. Animal enthusiasts of all stripes will also find plenty of interest, from noteworthy birds to cool insects to fascinating arthropods.

A common deciduous tree in such places is the Post Oak, Quercus stellata. The largest specimen I have ever seen occurs in this particular prairie; some have placed its age at 400 years. If this estimate is accurate, the tree would have been a big one when the county's namesake and our second president, John Adams, was born, in 1735.

Many herbaceous treats shoot from the poor soil, and there is an ever-changing floristic parade from earliest spring until the frosts of autumn. This is Spiked Lobelia, Lobelia spicata.

I was quite fortunate to notice an odd appendage sticking from an ash leaf. A closer look revealed it to be the caterpillar of an Eastern Tiger Swallowtail. An odd-looking tube of goo, the "cat" resembles a legless lime-green hippopotamus. The "eyes" are an exercise in deception. Should a small bird get overly inquisitive, the caterpillar quickly jerks its "head" at the potential predator, giving the illusion of an attacking snake. It appears that this one is about to form its chrysalis.
Given the abundance of Tiger Swallowtail butterflies coursing about the Adams county landscape, these caterpillars must be quite common, yet they are only rarely encountered. Most are probably too high in the trees to be noticed. 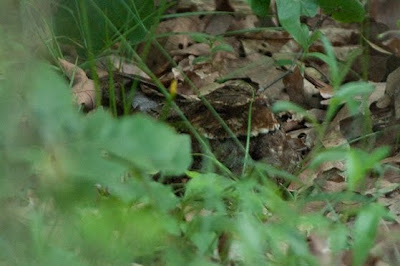 Photo by Greg Cornett
Ah! This one will get the birders' blood boiling, and I suspect that very few binocular-toters have seen one brooding its eggs. Look closely - it's a Chuck-will's-widow on the nest, a master of camouflage. This chuck nest was but a stone's throw from our destination - that sheet of tin.

OK. I've reached that tin sheet and lifted it to reveal its treasures :-) First thing we notice is a circular depression filled by a large wolf spider, and I think that it is one in the genus Hogna. Big and intimidating, this female is guarding an egg sac.

By moving in a bit, we can see a few of her eight eyes glaring at your narrator. There are about 56 species of wolf spiders in Ohio, and all of them are consummate predators. If you are the spider's size or smaller, you'd do well to stay out of its path. Soon, that beige-colored egg sac will hatch scores of tiny spiderlings, and for a while they'll ride around on mom's back.

But this is the arachnid that I had come to see; an animal that is legendary in the annals of scary creatures and inspires all manner of irrational fearful stupidity. It's a female Southern Black Widow, Latrodectus mactans. If you can get over its chilling reputation and take a close look, the widow certainly ranks high among the world's most beautiful spiders. The plump body is coated in the shiniest gloss black imaginable, and adorned with bright orange-red markings. Of course, in the animal world this color combo means DANGER and only a fool would carelessly handle a black widow.
I found her to be quite docile, and by lying on my belly was able to get my camera lens within inches. Using a small stick, I could manipulate her into different positions and the spider never acted aggressively. Lest you think I am one of the aforementioned fools prone to carelessly handling such beasts, I kept my fleshy parts well away from the spider at all times! Her messy tangle web was built of very sticky webbing, and make no mistake, you'd not want to become ensnared if you were an insect.

Widows often hang upside down in their webs, enabling us to better admire the bright hourglass stenciled on their abdomen. There is another species in Ohio, the Northern Black Widow, L. variolus, but the hourglass marking is broken in two in that species.
For the most part, black widows are uncommon and quite local in Ohio, and are found most frequently in southernmost unglaciated hill country. A bite can be serious, and you definitely don't want to be on the receiving end of a widow's fangs. A bit of common sense should prevent that from happening, though. Never reach sight unseen into rock crevices, under logs or into wood piles, and take care if exploring old sheds or other structures. If you do encounter a widow in the wild, such as this one above, take time to admire it and just leave it be.
Thanks to naturalist extraordinaire Mark Zloba of the Cincinnati Museum Center for putting me onto this noteworthy sheet of tin.
at June 01, 2010

Another spider blog. I believe this must be Dr. McCormac's attempt at systematic desensitization of us arachnophobic readers. It might be working.

Recently, I ran down stairs to the sound of my husband screaming "get me a shoe and a paper towel!". My first thought was the puppy had struck again, but to my utter amazement was the largest wolf spider I had ever seen, hanging out in our family room. Needless to say, he did not live to see another say, but we did admire his beauty for a few minutes. If he had stayed in the wild and not ventured into our tamed home, he may have lived. Alas, poor spider.