Yesterday, a few of my fellow Ohio Ornithological Society board members - Cheryl Harner, Gabe Leidy, and Bob Placier - darted into Columbus's Green Lawn Cemetery for a quick look. We had a board meeting later in the morning, but couldn't stand the thought of not getting at least a little birding in. 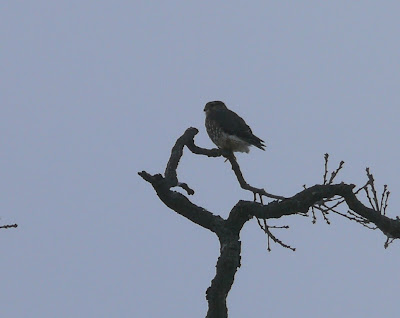 Upon arrival, we spotted the resident Merlin quicker than you can say Falco columbarius. No shrinking violets, these little death-dealers. This bird, which looked to be a young male, was teed up on one of the most prominent perches available. 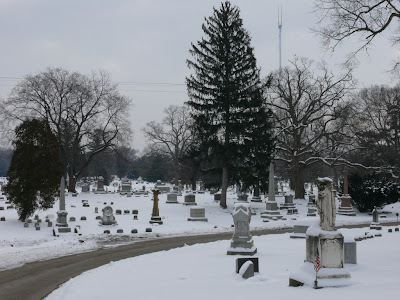 Here's the general lay of the land. The Merlin is visible; it's the speck in the crown of the huge tree just to the right of the big Norway Spruce that dominates the center of the photo. The Merlin is just to the right of the giant TV antenna in the backdrop.
Green Lawn is the 2nd largest cemetery in Ohio at 360 acres, and it essentially replicates a savanna. There are scores of large scattered trees, and no shortage of songbird prey. Merlins have wintered here for several years, and they are found in many other Ohio cemeteries as well. I suspect that many a golf course hosts them as well, but birders don't tend to bird such places.
Merlins have become far more common in Ohio in recent years. Their overall population is increasing, and the feathered speedsters are reclaiming former breeding areas, and seemingly expanding into new turf. I feel it is just a matter of time before they begin breeding in large urban Ohio cemeteries such as Green Lawn. Merlins don't build nests; they appropriate stick nests of species such as American Crow, Cooper's Hawk, and other raptors. We were wondering if an artificial stick platform placed high in a conifer might lure them to nest. Worth a try, perhaps. 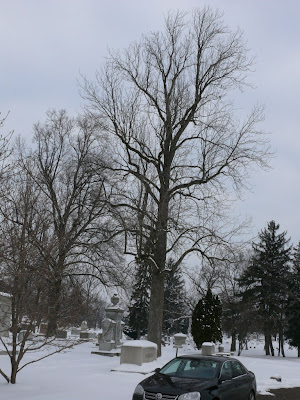 After a bit, the Merlin moved to this station - about 4/5ths the way up the big tree, on the right. This is a cool shot, because it is perched in the former state champion Cucumber Magnolia, Magnolia acuminata. A larger specimen has been found, knocking our tree to a lower spot on the podium. 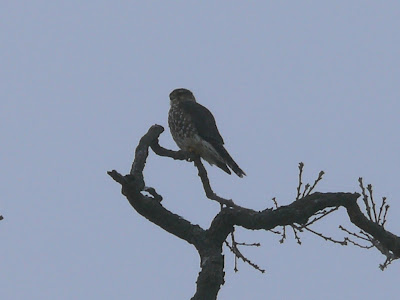 As is usually the case, this Merlin was arrogantly unmindful of our presence. They usually just could care less about people, not even bothering to cast a sideways glance at the bipeds clustered and fawning under the tree. No matter; we just felt fortunate to be in its presence.

We went to Lake View cemetery in Cleveland on Valentines Day (I know, romantic guy!) and we had a Merlin also.
That must be prime habitat!

I wonder why my pair didn't like the cemeteries :)