For some time, I've been curious about the specific makeup of the lichen communities of Ruby-throated Hummingbird and Blue-gray Gnatcatcher nests. The literature contains abundant reference to the fact that these species use lichens in nest construction, but I've yet to see a study that analyzed the lichen species and composition.

So, a few weeks back, I put out a request to the Ohio birding community, and was rewarded with a few dozen nests that were made available for study. 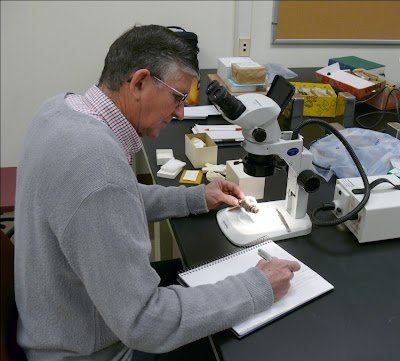 Enter Ray Showman, without doubt one of the leading lichenologists in the U.S. Ray lives in Vinton County, Ohio, and recently retired as a biologist with American Electric Power. AEP originally hired him to study lichen populations in the vicinity of coal-burning power plants. Lichens are quite vulnerable to air pollution; thus they serve as readily studied barometers of environmental conditions. 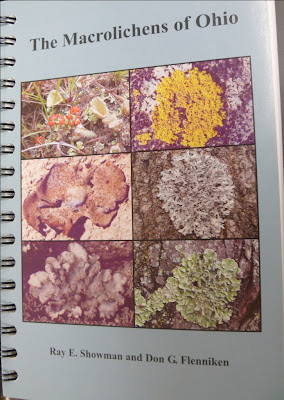 Ray brings real street cred to any project involving lichens. This is his book, co-authored by fellow Ohioan Don Flenniken. This is the gold standard for lichens in these parts. I've spent many an hour in the field with Ray, and can attest to his amazing ability to spot different lichens among a sea of crusts festooning a tree trunk, and quickly identify them. He was quick to accept the challenge of identifying lichens used in hummingbird and gnatcatcher nests. Some of these nests were many decades old, making for a good challenge. 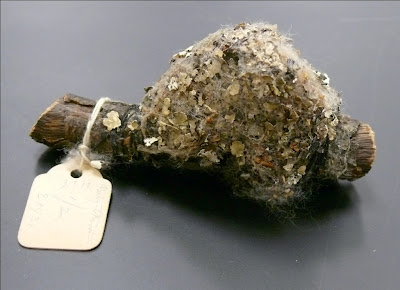 Ruby-throated Hummingbird nest. Truly tiny, a hummer nest could fit comfortably on a 50 cent piece. Hummingbirds tend to place small bits of lichens liberally on the nest's exterior, but don't completely shingle the structure with them. 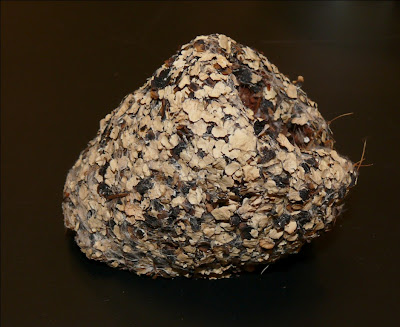 Blue-gray Gnatcatcher nest. These are elephantine in comparison to a hummer nest, and gnatcatchers tend to thoroughly shingle the exterior with a dense coating of lichens, and the individual lichen pieces are larger than those used by hummers. Gnatcatcher nests are usually more elongate and conical in shape, too, and the birds typically saddle them to a horizontal branch. In the field, they bear an amazing resemblence to a broken off branch stub. 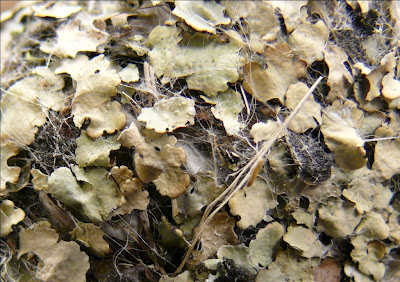 Closeup of the exterior of a Blue-gray Gnatcatcher nest from Licking County, Ohio. This one is shingled with almost equal proportions of Green Shield Lichen, Flavoparmelia caparata, and Hammered Shield Lichen, Parmelia sulcata, together totalling about 40% of the nest's lichens. The remainder were a species of Parmotrema lichen, not identifiable to species. 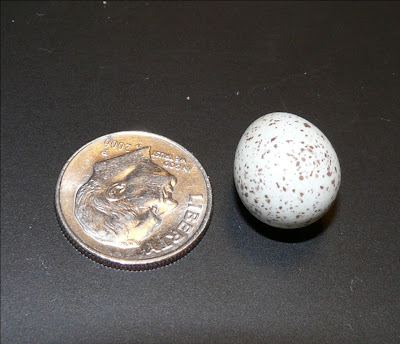 These artfully crafted, elaborate nests house some of the smallest eggs of any of the North American birds. This is a Blue-gray Gnatcatcher egg. A Ruby-throated Hummingbird egg is somewhat smaller. As both species use spider webbing liberally in nest construction, there is a certain amount of elasticity to the nest. Little hummers and gnatcatchers, just before fledging, are many, many times larger than the egg from which they emerged. The cup nest can expand - bow out - to accommodate the growing birds' bulk. 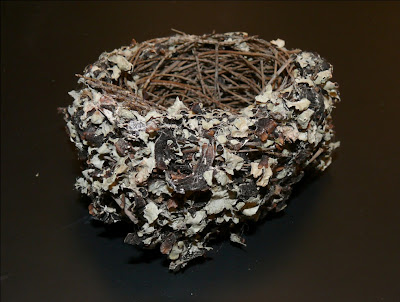 This is the nest of an Eastern Wood-Pewee, a species that also uses plenty of lichens. However, pewee nests are devilishly hard to come by, probably because of the difficulty of collecting them. Pewees generally place their nests on small horizontal limbs, well out from the trunk and often high off the ground. Such locations are nearly impossible for a person to reach without a bucket truck. When I was researching my book Birds of Ohio, the Eastern Wood-Pewee was the probably the hardest common species on which to find detailed life history information. The relative lack of information is in part due to the difficulty of studying active nests.
Relative size scale of lichen-spackled nests: Eastern Wood-Pewee (left); Ruby-throated Hummingbird (bottom); Blue-gray Gnatcatcher (top). 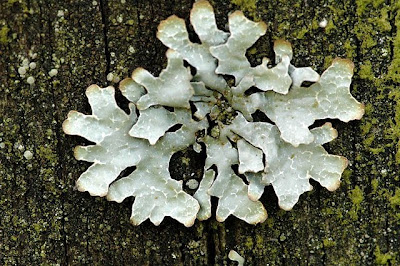 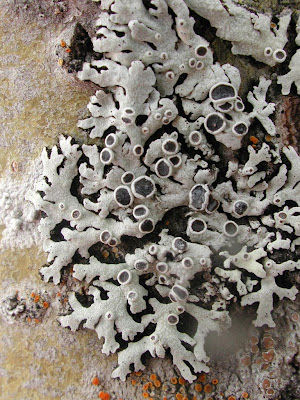 Hoary Rosette Lichen, Physcia apipifolia, a very common species on trees where the lichen species harvested by hummers and gnatcatchers grow. But, it was not seen at all, at least in the nests that we examined. Why?
Between the gnatcher and hummingbird nests, we found a total of five species, and all but one were used commonly by both species. The Hoary Rosette Lichen pictured above differs in that it grows tightly appressed - flat - to the bark. It would be difficult for a hummer or gnatcatcher to pry pieces of it away from the tree.
Both of these bird species site their nests on small lateral tree branches, typically well away from the trunk. The lichens that we found in their nests are species that thrive on branches, and at least in one instance, don't occur as often on large trunks. It stands to reason that these are the lichens most desirable for nest construction, as they occur in the immediate vicinity of the nest site, thus making for better camouflage.
Also, all of the lichen species used in nest construction produce elongated lobe tips that arc away from the bark. This growth habit makes for easy plucking and removal for birds that have small, delicate bills. All of the lichens we found are very common, too, and readily available to the birds.
Lichens tie these tiny birds to a much larger ecological picture involving plant communities, and man's impact on air pollution. Ray and I are working on a paper for publication in the Ohio Cardinal that will describe our study and findings in detail, and explore the birds' ecological relationship with lichens.
at February 02, 2010

What an intersting study. I have often wondered about the lichen used in these nests. I can't wait to read the results. Which 5 lichen??

I love your blog, I always learn something and you never know where one of your links will lead you...fitty cent...

Wonderful post. I would love to read the results of your study. And a side note, I have an active Phoebe nest happening now--in the eave of our deck gazebo.