It's been a whirl of things entomological lately, and I'm going to continue that trend with two more fascinating beasts. One of them, you know and probably fear. The other is a puzzler at first and makes for a good learning experience.

As an aside, if you enjoy the outdoors and like to spend time in the field, start looking at insects if you don't already. As mid-summer rolls into early autumn, the bugs increasingly proliferate and their variety is staggering. Many are beautiful, and they all have fascinating life histories. Besides, insects are the fuel that makes much of the songbird world go 'round, and one can only get a better grasp of the feathered crowd by knowing more about their food!

Last Sunday, Kelly Williams-Sieg and I ventured into Scioto Trail State Forest, and the very first stop proved to be quite productive. Upon exiting the vehicle, we quickly noticed that a nearby stand of Gray Dogwood, Cornus racemosa, was under siege by beautiful white and yellow "caterpillars".

Just as would a good caterpillar, these larvae are making mincemeat of the dogwood leaves, stripping them down like a kid eating a cob of corn. Upon close inspection, the larvae are rather showy; almost gleaming white and granular as if they were wet down then dusted with powdered sugar. Smooth lemon-yellow underparts provide a nice contrast. I wasted a lot of time trying to find this thing in David Wagner's excellent book Caterpillars of Eastern North America.

I figured that surely such a distinctive critter would be easily found in the caterpillar book, but it wasn't. Why? Because, it isn't a caterpillar! These are the larvae of a sawfly, which is a huge family in the Hymenoptera, which includes bees and wasps. This species is the aptly named Dogwood Sawfly, Macremphytus tarsatus. Sawflies are phytophagous, or plant-eaters. The larvae above has posed beautifully on a ripe berry of the Gray Dogwood, and there must have been a few hundred of his compadres chowing down on the plants.
Growing side by side with the Gray Dogwood were several plants of Silky Dogwood, Cornus amomum. Fascinating to me was the fact that the sawfly larvae completely shunned this species, even though it is very closely related and was readily accessible. This just shows the great degree of chemical specificity required by many plant-eating insects. 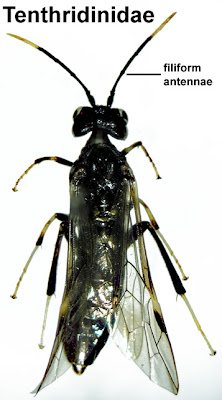 Adult sawfly - not Dogwood Sawfly, though - courtesy of the University of Minnesota entomology department. The larvae above will probably grow into something similar, at least the ones that make it to adulthood.

I was delighted to encounter an active nest of Eastern Yellowjackets, Vespula maculifrons. The workers were industriously expanding the subterranean chamber, providing wonderful photo ops. You know this one, and so does nearly everyone that's been to a picnic. Yellowjackets have a sweet tooth and a propensity for sipping from the same soda can as you. More than one person has inadvertently swallowed one of these along with their gulp of Dr. Pepper and paid a painful price. When riled up, yellowjackets are formidable bugs and can deliver repeated nasty stings.

By using slow, careful movements and laying on my belly I was able to get my lens right on top of the nest without unduly disrupting the excavation operation, or getting stung. Here, a worker emerges with a ball of clay. It was a constant procession of wasps carting out wee orbs of mud, flying them off to who knows where, and returning for more. Eastern Yellowjackets nearly always nest in ground burrows, and once a suitable site has been appropriated, they enlarge chambers for the actual nest. The nesting cavity is full of pulpy paperlike material, which the workers manufacture by chewing up and masticating plants. It was tempting to do a bit of excavating myself and lay the whole thing bare, but that'd hardly have been fair to the hard-working wasps. Plus, I will guarantee you I'd have been stung senseless if I'd tried that. Probably would have made for some good video, though.

You probably already know this, but the way to tell they are sawfly larvae and not caterpillars are the number of prolegs-caterpillars only have 5 pair. Sawflies have 6 or more.

On your belly next to a yellow jacket nest. Man, you are die-hard!

OK, you win the Bravest Naturalist I Know Award. To lie on your belly in front of a Yellow Jacket nest and photograph/film them is either totally fearless or incredibly stupid. I will vote for Courageous, but hold Crazy in reserve.

V. maculifrons got me on the back just last week. Flew into my car landed on my back and zapped me when I leaned back on the seat. More painful than a honeybee, less so than a bumblebee. This occurred at 40 mph. The pain was akin to a cigarette burn, and lasted about three hours, followed by two days of itchiness. On day three, the welt was gone and so was the itching. I recovered the assailant, stunned but alive on the car seat and released him on the shoulder. It was perhaps the most magnanimous gesture I have ever managed.

Sawfly larvae very cool...
And hee hee..thanks for getting down on the ground to photo and video the yellow jackets. Interesting!
I knew someone who swallowed on of those critters,soda can..
Gotta watch it when they are around..cover the can!

--
Jack
Home Security Systems no CREDIT CHECK everyone is approved