Rare birds are always exciting. Especially when they are giant and prehistoric in appearance. Wood Storks certainly qualify. Thanks to Robert Schlabach for following up on a report in Coshocton County from last Monday, and getting the word out. He found two storks at the reported locale on Tuesday, and yesterday a third bird materialized. They are still present; I saw them between 8 and 9 am this morning. 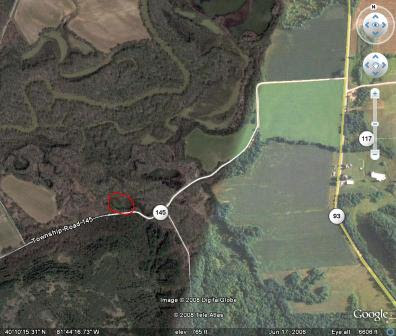 Ground zero for the Wood Storks. The small wetland they are frequenting is outlined in red. This site is several miles south of Coshocton, in southern Coshocton County. Township Rd. 145 goes east-west between State Rtes 83 and 93. This road travels along low-lying and oft-flooded Wills Creek, and there are interesting wetlands galore in the area.
This is the stork habitat. Those three white dots are our birds. As Bruce Glick had noted in a posting to the Ohio Birds listserv, this area has a very Floridian feel to it, with plenty of swampy ground. The storks must feel right at home. I can't wait to get back and do a bit of botanizing. In my short trip, I saw a number of interesting and unusual plants, some of which are often indicators of other good stuff. Should be lots of dragonflies in the vicinity as well.
Three juvenile storks. If their bills were above water, which they seldom were, you would see that they are pale ivory-yellow - a character of young birds. Storks feed in large measure by feel. The tips of their bills are sensitive and they feel around in mucky water where it is often too cloudy for visual prey detection.
A better view of one of the birds, albeit head still submerged. This morning was very dark and misty - not good conditions for photography of birds, and I didn't manage many good shots of the storks standing upright.
Most of the prey that I could see them catching appeared to be crayfish, perhaps some snails, and other small aquatic life. This one lucked into a big Longear Sunfish, and had fun wolfing it down. Once he got it headed the right way, it wriggled down the gullet fairly readily.

Wood Storks are big, impressive beasts. Their overall robustness was especially apparent when they would flap their wings. I've seen many of them in the south, but like most Ohio birders, never in Ohio. In fact, this bird was #356 for my state list, but who's counting :-)

This was at least the sixth Ohio record. The first came from July 23, 1909 in Clinton County, and oddly, the second record came from very near the first locale on May 5, 1946. The next documented record came from Ashtabula County on July 1 & 2, 1955. An amazing seven birds were seen in late June of 1966 in Hancock County, and became short-lived local celebrities. The last record was from Portage County on September 9, 2001. There are other records that were probably correct, though, such as two birds in Ottawa County on August 4, 2004.

Wood Storks are well known for post-breeding dispersals northward from the Florida, Georgia and South Carolina breeding colonies, and there are many records from the Midwest. So, while the appearance of these birds is not unexpected, it is still a great record. So far, while seemingly oblivious to the hubbub they are creating, these three storks have been observed by dozens of birders.

I hope that everyone who wants to see them gets over to Coshocton County.

Nice photos. Please remember the visually impared when posting a map though. I am red-green colorblind and cannot tell where the circle is on the aerial. yellow is always a good color. Just a suggestion. Respectfully

I live in Champaign county and have seen two storks like this in the past two weeks. One was in a pond along Route 4 between Mechanicsburg and Springfield and the other just this morning at the Urbana City Park's pond. I thought it odd the first time that I saw one and my daughter told me at the park that she saw a white flamingo! I thought I would do a little research and found your site! Do you have any idea why there seem to be so many around all of a sudden?

Wow - more Wood Storks in Ohio would be an extraordinary find and I'd love to know more! If you see them again, be sure to take some photos. With a bird that large, you don't have to be close to get an identifiable image. Let me know if you encounter them again.

Also, be mindful that there are other far more likely big white wading birds. Such as the Great Egret.

We live outside of Warsaw ohio in Coshocton county and a stork just landed in the pond across from our house. We have seen this stork for 3 years now! Quite impressive