Back in late July, Dan Adamski sent along photos of nesting nighthawks on the roof of the University Medical Center in Toledo. Later, he passed along more photos as the nestlings grew. About nine days ago Dan sent me a few photos of the remaining juvenile. It appears that the other youngster had flown the coop by the time Dan had returned from a vacation, and I'm sure the one pictured below has by now. One of the problems with blogging about natural history is that there is never any shortage of subjects, otherwise I would have had Dan's most recent photos up much sooner! 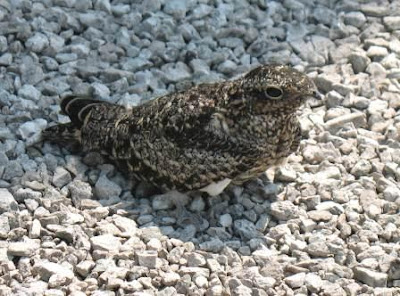 Here we find the young bullbat on August 21, looking just about like an adult. Still has traces of down peeking through, and nice rich buffy feather edging, but this one should be pretty near flight-ready. His nestmate has already left the nest. 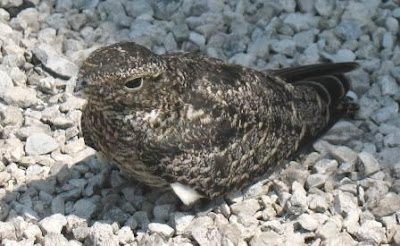 By now, this bird could be quite far from Toledo and Carty Finkbeiner. Nighthawks engage in long-distance migrations to South America. When you think about it, a bird like this is a true engineering marvel. Not only does it have to engage in a 6-7,000 mile one-way peregrination to the Amazonian Basin within weeks of taking wing for the first time, it also has to learn to catch insects high in the sky. Nighthawks are aerialists supreme, and much of this talent must be genetically encoded.

Anyway, much gratitude to Dan Adamski for sharing the story of this rooftop-nesting bullbats with us, and here's hoping that both youngsters make it successfuly to the tropics, and return to the Buckeye State next year.