The First, and Still the Best

Bird Watcher's Digest celebrates its 30th anniversary this year, a real milestone for any birding publication. Indeed, no other birding magazine other than BWD has been around long enough to celebrate their pearl anniversary. The bird watching scene has changed a lot since BWD's inception. When the inaugural issue arrived, I was a 16 year old high schooler, and I knew precious few others who appreciated birds like I did. I kept my interest in birds under wraps, for the most part, and we were akin to an underground cult, at least those of us in my age bracket.
Not so today. Clubs abound, and other bird-related magazines have proliferated. An estimated 50 million U.S. residents actively watch birds on some level. We make a major economic impact, too: some $14 billion is pumped into the economy each year by bird enthusiasts.
BWD has been there through it all: real pioneers jumping into the unknown when Bill Thompson Sr. and his wife Elsa took a gamble and launched the mag. They both still take an active role in BWD, but day to day stewardship has passed to the able hands of their sons Bill Thompson III as Editor, and Andy as Publisher. Daughter Laura oversees circulation, keeping the magazine family owned and operated, and close to its roots. This recipe works. BWD remains the most interesting, informative, and enjoyable of birding mags. 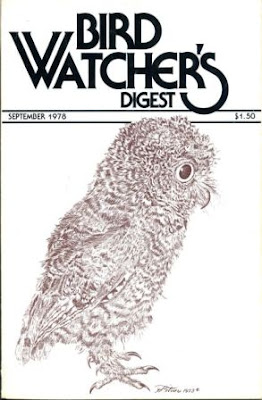 The cover of Bird Watcher's Digest's first issue, September 1978, featuring a young red morph Eastern Screech-Owl. I am proud to say that I was one of the original subscribers and still have this issue sitting on my shelf, along with many others. Over the years, many of our leading ornithologists and birders have taken pen in hand for BWD, writing stories and columns for its pages. Luminaries like Roger Tory Peterson, Kenn Kaufman, David Sibley and many others.

The most recent issue featured another nocturnal species closely related to the screech-owl on the first cover; the Whip-poor-will. I still am amazed that I now write for the mag occasionally, and am very flattered by the opportunity - the whip cover story in the last issue is mine. I would not have guessed at this turn of events when I was sixteen and devouring those original BWD issues.

We recently had a meeting at BWD corporate headquarters in Marietta, Ohio, and I took the opportunity to lure everyone outside for a group photo. This picture is cool because in addition to all of the wonderful folks who make BWD go, the two founders, BT2 and Elsa, are here as are BT3, Andy, and Laura. From L to R: Bill Thompson III, Helen Neuberger (trying to hide), Susan Hill, Jim Cirigliano, Laura Thompson Fulton, Elsa Thompson, Bill Thompson (the good-looking one), Ann Kerenyi, Andy Thompson, Linda Brejwo, Claire Mullen, Jamie Tidd, Emily Breen, and out front Pokey the Wonderdog. Customer service reached an all-time low while this photo shoot was being set up!

If you don't get the mag, and you like reading about birds, I'd recommend a subscription. In fact, I will make an unadulterated and unabashed plug. Go right here.

Bill of the Birds said...

You are too kind! We're proud to be celebrating our 30th year of publishing and we know we have our loyal readers (like you) to thank for our longevity.

Now, did you say it was $100 we owed you for this nice post about BWD? I'll get that check made out right away...-BT3