Rare Dragons in the Oak Openings

Rick Nirschl is at it again. Rick, who is one of the most accomplished naturalists plying the interesting habitats of northwest Ohio, has made many great finds. The birders amongst our ranks may remember the strange hybrid warbler dubbed "Nirschl's Warbler" that he found several years back in Toledo. This quasi-mystery bird is generally thought to be a hybrid between a Northern Parula and Cerulean Warbler, and it is still returning to the place where Rick first found it.

He's also a top dog in the world of dragonflies. A few years ago, Rick found Striped Saddlebags, Tramea calverti, at Magee Marsh. This was a first state record, and such things get the bug boys going just like the discovery of a Fork-tailed Flycatcher would have the birding crowd hopping madly about in a feverish twitch.

At this early stage in the 2008 game, Rick has produced two major finds from the Oak Openings. He also takes outstanding photos, and was willing to share his handiwork with us. 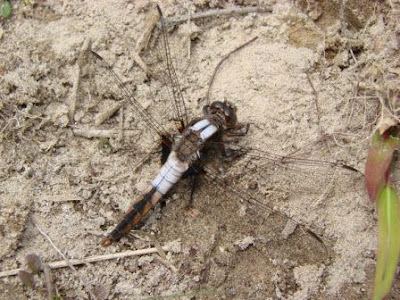 Chalk-fronted Corporal, Libellula julia. A real northerner, this one - Ohio is at its southern limits - and currently listed as endangered in Ohio. Lucas County is a new record, and Rick found a breeding colony producing youngsters. 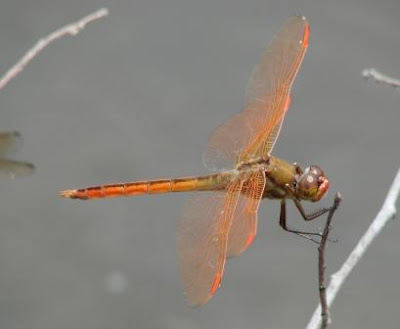 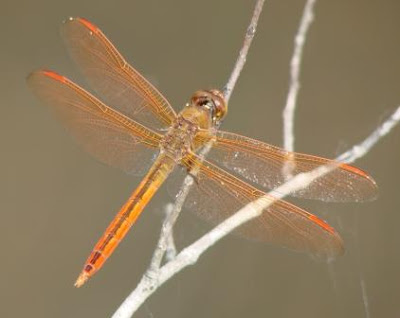 A real jaw-dropper, this one. It's a Golden-winged Skimmer, Libellula auripennis, and is the opposite of the corporal in that it is at its northern limits here. There were only two prior records from Ohio.

Great finds, Rick, and thanks for sharing the photos.

I look forward to your blog everyday and really enjoy it. You are always (or mostly) in central, west or southern Ohio. Is there anyone with a blog like yours in Lake, Ashtabula, Geauga or Trumble counties that you know of?