Yellow-crowned Night-Herons are odd, rather enigmatic birds up this way. Ohio is at the northern limits of their range, and they are a bona fide rarity here. In any given year, only a few tiny breeding colonies are evident, and generally these are ones that have been known for a while, such as the Bexley birds. Discovery of any Yellow-crowned Night-Heron, especially during the breeding season, is always noteworthy.

There are undoubtedly more of these mostly nocturnal herons than we know, but probably not very many more. They aren't particularly shy, but as they are most active in the evening, and quiet and retiring in general, they can be tough to spot.

Therefore, it was exciting news when Alicia Elmer found an adult forgaging along the shoreline of Norwalk Reservoir in Huron County, hard on the eastern edge of Norwalk, back on May 24. She has been keeping tabs on it, and is still seeing the bird in pretty much the same place up to the present. Seeing only one bird doesn't mean there aren't others, or at least another adult. With luck, Alicia's bird is one half of a team, and they have a nest somewhere nearby. She is looking and watching, hoping to find evidence of breeding, which would be one of the highlights of the season for the Ohio Breeding Bird Atlas II. 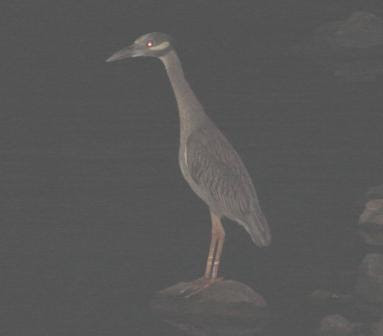 One of Alicia's photos of the night-heron, taken the evening of June 10. A bit dim, but that's hard to avoid when shooting photos in the dark. Not bad at all, though, and certainly provides excellent documentation of one of our rarest breeding birds, and we do hope this one is nesting. Alicia watched it foraging for, and catching, one of the trademark prey items of Yellow-crowned Night-Herons - jumbo crayfish. Yep, just like the Cajuns - and these birds are way more common down in Bayou country - they love big-pinchered craw-daddies. 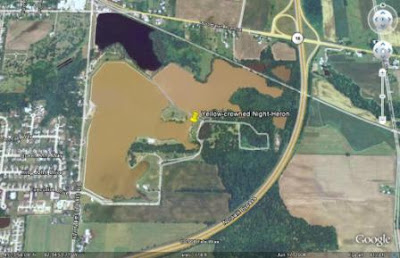 Alicia asked me to share the locale, in case others might be interested in looking. I hope I am at least close to placing the pin where she has been seeing the bird, although I don't think it could be too far off. A road traverses much of the southern side of the reservoir, and access is easy.

If you do make your way to Norwalk Reservoir and spot the bird, or any others, please share your observations.