Wow, an extraordinary number of unusual birds have been appearing of late, stimulating rarity fever amongst the masses. Matt Anderson's fantastic discovery of a Pine Grosbeak leads the list in terms of sensationalism - the last dates from 1987. This beak is nearly everyone's state Pine Grosbeak, of those who have been lucky enough to see it. I was one, and have some photos that I'll blog later.

Late hummingbirds are also appearing. One came to light today near Toledo, that appears to be our record late Ruby-throated Hummingbird. I got a call about another today at a Cincinnati-area feeder and will hopefully get photos soon. These late ones really need scrutinized closely, especially as most are females/immatures and often not readily separable from other similar species. Don't just assume Ruby-throated...


I also just received word of a very interesting Northern Saw-whet Owl that was captured at the Chillicothe banding station already sporting a band. This one has come a LONG way, and I'll get those details up here soon.

But, the showiest of all is an amazingly cooperative Sabine's Gull found at Huron on Turkey Day, November 22, by Mike Busam. Congrats to Mike for locating this bird and tipping everyone off. Because he did so, a great many folks have seen this beautiful small gull for the first time. Sabine's Gull is quite rare in Ohio, with only a few seen each fall, if that. Most don't stick like the Huron bird, either. These arctic breeders are highly migratory, wintering primarily in tropical seas off Africa and South America. Relatively few pass through the Great Lakes.

Upon arrival in downtown Huron and the river, one is greeted by mobs of Bonaparte's Gulls, making a cacophony of noisy squeaking buzzes. Masses of Bonies are always great places to look for rare gulls. Indeed, this horde contained at least two Little Gulls, according to other reports.

Adult Bonaparte's in flight. These small gulls are quite striking with their flashing white leading edge to the upper wing, and bouyantly graceful flight. They are not the trash-eating McDonald's scavengers that some of their larger brethren are; Bonies are highly piscivorous, deftly picking small fish like Emerald Shiners from the water.


Adult Bonaparte's Gull at rest. A strikingly beautiful bird, even without the black hood they sport in breeding plumage. The best is yet to come, though.

Ground zero at Huron, the terminal point of the municipal pier. The lighthouse is a great place to watch birds moving past on the lake. I've spent countless hours out there, many of them in November. Conditions are often not very pleasant, with blustery winds and freezing temps. Such was not the case today, with hardly any wind and low 40's. Quite balmy for a late November Lake Erie day! This is the spot that the Sabine's Gull is fixated on, and it made frequent flights right around the lighthouse, sometimes flying within ten feet of us, or roosting on the water nearby.

Sabine's Gull, Xema sabini, at rest. Doesn't stand out nearly as much as when in flight, as you'll soon see. About the size of a Bonaparte's Gull, the brown mantle of the Sabine's is distinctive, as are those blotches of brown that extend forward onto either side of the breast. This may be the only gull named for an astronomer. Sir Edward Sabine was an astronomer who accompanied an 1818 expedtion into the Arctic, and helped discover the gull. His brother, Joseph, named it in his honor. 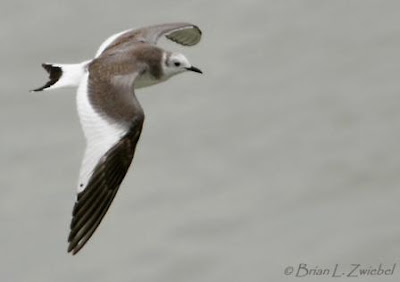 I was fortunate in running into my friend Brian Zwiebel upon arrival at Huron, and we were able to spend the afternoon birding and admiring the Sabine's Gull. Brian is a topnotch professional shooter, as you can see from the above photo, which is his. Although often close at hand, getting crisp in-flight shots of the bird was not easy. As befits such a long-distance migrant, the gull is quite effortless on the wing, and deceptively fast. The upper wing pattern is unmistakable and stands out from great distances. The slightly forked tail is also characteristic and adds yet another interesting touch to an already visually stunning bird. If you haven't made the pilgrimage to see this Sabine's, I'd go while the getting is good.

Thanks to Mike Busam for finding this bird and communicating it to all, and to Brian for graciously letting me use his photo.