Check this out... Apparently having a butterfly named in one's honor does not come cheap. But, if that is what you desire and can pony up some serious bucks, might as well choose something showy like one of the oddly named owl-butterflies... 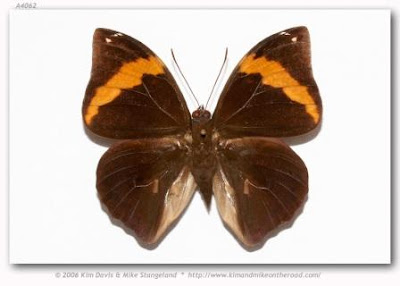 GAINESVILLE, Fla. — A butterfly species discovered in a Florida museum has a new name after an anonymous bidder paid $40,800 for naming rights in order to honor a woman who died in 1972.
The butterfly's common name will be the Minerva owl butterfly. It's being named after the late Margery Minerva Blythe Kitzmiller of Malvern, Ohio.
While the bidder's name was not disclosed, the payment was made on behalf of Kitzmiller's grandchildren.
The butterfly's scientific name will be Opsiphanes blythekitzmillerae.
University of Florida researchers George Austin and Andrew Warren discovered the new species while looking through a butterfly collection at the Florida Museum of Natural History in Gainesville earlier this year. They found it was misidentified as an example of another species.
The 4-inch butterfly is brown, white and black and lives in Sonora, a Mexican state bordering Arizona. Proceeds from the auction will go toward further research of Mexican butterflies.
Beverly Sensbach, director of development for the museum, said Kitzmiller's grandchildren wanted to honor her through the name of a beautiful butterfly because she was "an extremely creative person who wrote poetry, played piano and sang."
The rights were sold via an online auction. Warren had said before the auction closed that the researchers were hoping to raise at least $50,000, which would fund two years of work in Mexico.
at November 24, 2007

It even made CNN where there is a picture of the exact species:

Thanks for the link to the real McCoy, Donald. Not exactly Blue Morpho dashing, but hey, it's still a cool-looking butterfly.