Last Saturday, March 21, I headed south into Highland County. The primary target was the subject of the last post, Fallsville Falls. See that post RIGHT HERE.

I have noticed that some of the more wild-eyed, hysteria-prone among us are using social media as a bully pulpit from which to berate others for going outside. INSIDE! STAY INSIDE! they scream through their keyboards. Fortunately, at least for now, more level-headed leaders recognize the therapeutic value of being outdoors, and the vast majority of people pay heed to the medical professionals' warnings about social distancing and other safety precautions. Many parks and natural areas are plenty big enough to stay out of each other's 6-foot sphere - and way beyond that - and most people do just that. I would say one's odds of encountering viral trouble are far greater at the grocery store than in the great out-of-doors. Just use common sense, and follow guidelines.

Anyway, social distancing was no problem on this foray. I saw zero other people when I was out on foot at the falls, or the other Highland County natural area that I visited. That's actually how I like things when out in Nature, being a longtime practitioner of social distancing - long before it became a "thing". 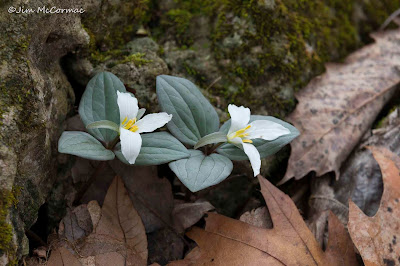 A stunning pair of snow trillium, Trillium nivale, spring from a thin veneer of soil over dolomitic limestone.

My second stop was a magical little place along Rocky Fork, a beautiful tributary of Paint Creek. The snow trillium were going great guns here, although most other spring wildflowers were just barely getting started. The duo of trillia above caught my eye, and I spent some time admiring them and attempting to make images.

Shortly after the trillium photoshoot, I glanced around to see a suspicious looking lump amongst last year's brown leaves of an American beech sapling. I had to blink twice, as given the 32 F temperature, I did not expect to see what I thought I saw. 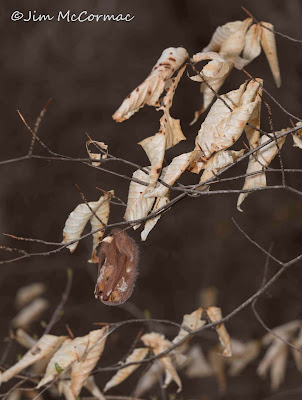 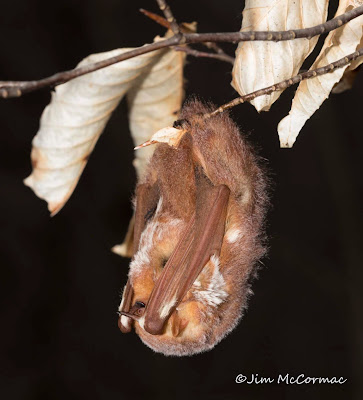 Sure enough, it morphed into a beautiful eastern red bat, Lasiurus borealis, and probably a female judging by the extensive patches of frosty hair.

Ever since I learned about red bats roosting in old foliage of trees, especially beech, I cannot look at such situations and not think about bats. And I had, earlier this day, but discounted the possibility given the cold temperatures. Red bats often roost in leaf litter, and I figured that if any were around, they'd be buried in the leaves. 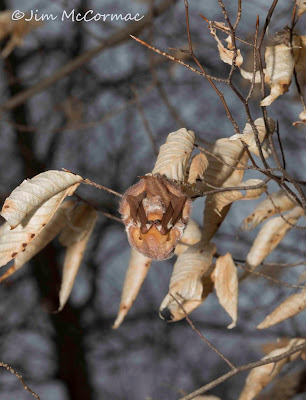 One good reason to tote the 70-200 around is for opportunities like this. At 200mm, I could stay well clear of the bat's comfort zone, although I think it was nearly shut down in a deep torpor, anyway. Fortunately, red bats often roost low to the ground, and this one was about six feet off the ground - perfect for observation and photos. 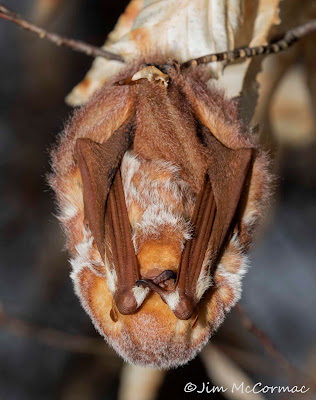 She covers her face with her wings - a behavior I'd not seen before. But I've never found one when it's been this cold. This may be a heat conservation tactic.

Red bats are highly migratory. But some also overwinter this far north. It's be interesting to know if this one is an early migrant, or a local overwinterer. Anyway, keep an eye on those beech trees for funny lumps, and you might be rewarded with a sighting of one of North America's most elegant bats.

A couple of years ago during the April Wildflower Pilgrimage at the Arc of Appalachia, my husband and I saw one of these beauties down at Rock Run near the Ohio River. Oh! The thought still puts a big grin on my face, as did your wonderful post and photos. Thank you, Jim! 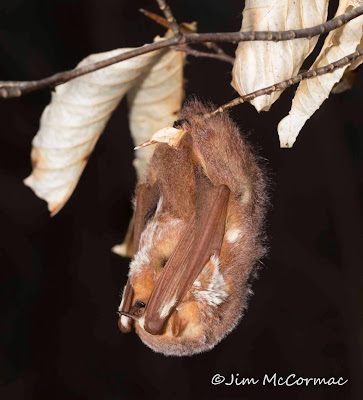