Nature: Western kingbird is a sight to see in Ohio 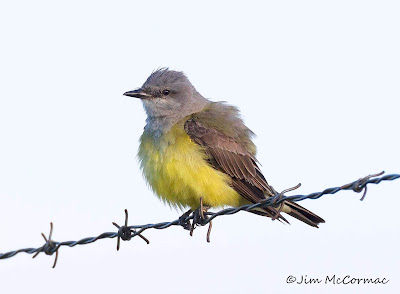 A rare western kingbird hunts from a fence/Jim McCormac

On the Northwest Side of Columbus lies a large stretch of green in an otherwise heavily urbanized setting. The Ohio State University Airport (Don Scott Field) and the adjoining OSU livestock facility cover about 1,300 acres. This land forms a big green oasis, especially for birds that like open country.

Birders like to check the farm’s perimeters, where there is some access at the western end of the complex. Expert birder Irina Shulgina was exploring here on Aug. 11 when she spotted an out-of-the ordinary flycatcher hunting insects from phone wires. She had found a rare western kingbird!

This wasn’t Shulgina’s first experience with western kingbirds. She has found two others at this locale, one last May and another in May 2018. Add a kingbird in Union County in 2014 to her tally, and she is the undisputed western kingbird champion of Ohio.

Western kingbirds normally inhabit the western half of the U.S. and adjacent southern Canada. In winter, they retreat to Mexico and Central America, with a small wintering population in southern Florida. These robin-sized flycatchers are rare visitors to eastern North America, with most sightings along the Atlantic coast.

Ohio’s common counterpart is the eastern kingbird, which breeds in all 88 counties.

Ohio’s first western kingbird record dates to Sept. 13, 1930, when one was seen near Toledo. That pioneer was the vanguard of many more to come. These kingbirds remained scarce until the 1980s, with only a few reports a decade. After that, sightings blossomed and western kingbirds were recorded regularly, with multiple birds some years.

By the early 1990s, records had plummeted. The kingbird yo-yo ascended again in the 2010s. Since 2011 there have been 10 sightings — the most of any decade since the original discovery.

I journeyed to the OSU farm on Aug. 12 to see Shulgina’s most recent discovery. It didn’t take long to spot the bird hunting from a chain-link fence. As the name suggests, kingbirds are not shrinking violets and typically hunt insects from conspicuous perches.

The pugnacious flycatcher lived up to its name by aerially bombarding a nearby American kestrel, causing the little falcon to flinch and duck. Kingbirds are notorious for badgering raptors that dare fly through their turf. Even bald eagles are not exempt from harassment.

In turn, some birds think little of kingbirds and express their displeasure. Several barn swallows seemed to enjoy strafing the kingbird as it hunted.

Many other birders have stopped by to view the rare flycatcher, which was present until at least Aug. 21. For many, it is a “state bird” — their first sighting of this species in Ohio. Many birders love to collect new bird sightings like a philatelist collects stamps, and I confess to lacking immunity to listing fever. I first saw a western kingbird in Ohio in Butler County in 2002, but the protagonist of this column is only my second Buckeye State bird.

Given the recent sightings of western kingbirds at the OSU livestock farm, it will be interesting to see whether they attempt nesting here in years to come.