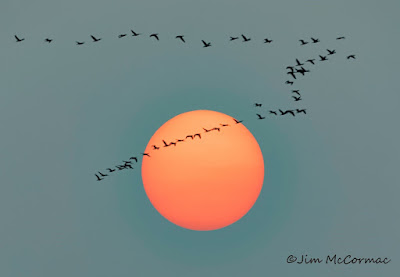 
Early in my birding years back in the 1970s, a double-crested cormorant was a big deal. Most years saw fewer than a dozen reports, and any birder would brake hard for cormorants. DDT, a pesticide once sprayed with impunity, had caused a precipitous decline in their population.

The fish-eating cormorants are an indisputable winner among our avifauna. Following the 1972 ban on DDT, cormorants adversely impacted by the pesticide began a slow ascent out of the abyss. Today, they are again abundant.

In 2016, a book titled “The Second Atlas of Breeding Birds in Ohio” was released. It summarized mountains of data generated during a statewide survey conducted from 2006 to 2011.

Two of the most interesting tables are found on pages 48 and 49. They show species with the largest increases, and decreases, from the first atlas, which took place from 1982 to ’87.

It’s no surprise that two of the biggest winners were also DDT recoveries. The bald eagle spiked a whopping 2,300 percent, and the peregrine falcon increased 1,200 percent. As with the cormorant, DDT disrupted their reproductive cycles by causing fatal thinning of eggshells.

Other reasons causing upticks in bird populations are interesting and varied. Wild turkeys have boomed because of the state wildlife agency’s ambitious stocking program, plus habitat recovery. A steadily warming climate might be permitting black vultures and blue grosbeaks — both southerners — to expand northward.

Opportunistic cliff swallows have learned that large bridges are good substitutes for rock faces and now create colonies on many large spans. Sedge wrens have been the beneficiary of prairie restorations and grasslands established through the Conservation Reserve Program.

Harder to explain are northern breeders spreading south, such as the winter wren and yellow-bellied sapsucker. Recovery of formerly denuded forests might explain their increase; they are recolonizing former haunts.

Less encouraging is Table 4.3-2, which lists the species with the most significant declines between breeding-bird atlases. It is a much larger list than the expansion table.

The fascinating “butcherbird” or loggerhead shrike leads the list with an 82 percent population drop. The carnivorous songbird is a victim of habitat loss: the shift from wildlife-friendly agricultural landscapes to highly manicured corn- and bean-scapes devoid of habitat.

Declines of many other species correlate with large-scale changes in agricultural land-use; they include the bobolink, northern bobwhite and upland sandpiper.
Less clear are losses of eastern whippoorwill and ruffed grouse. These forest dwellers might be victims of changing woodland ecology wrought by an increase in invasive plant species and loss of biodiversity.

Declines in other forest birds, especially the cerulean warbler and veery, might be in part caused by their nomadic lifestyles. These birds and many others nest in Ohio forests, but they migrate several thousand miles to winter in tropical forests of Central and South America. They face threats on the wintering grounds, and numerous man-made obstacles along the migratory corridor.

‒ Jim McCormac will give a presentation about Ohio’s role in bird conservation at 7 p.m. Sept. 13 at the Grange Insurance Audubon Center, 505 W. Whittier St. The discussion will explore the winners and losers, reasons for changes, and what can be done to help. Admission is free.
For more information, visit http://grange.audubon.org/.