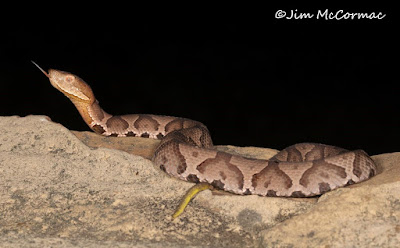 Venomous snakes strike way over their weight in regard to reputation. They can pack a punch, but the odds of encountering one in Ohio is very low.

Three venomous serpent species occur here. The massasauga rattlesnake and timber rattlesnake are listed as endangered by the Ohio Department of Natural Resources. The former is an imperiled denizen of wet prairies and has declined tremendously. Timber rattlesnakes are rare inhabitants of remote tracts of southern Ohio forest. They formerly ranged much more widely, including the Lake Erie islands.

People and venomous snakes do not coexist well. If human encroachment into their turf becomes too dense, the snakes always lose. If habitat destruction doesn’t vanquish them, persecution will.

I recently got a lesson in snake/people conflict, and it wasn’t the first time. While returning from a nocturnal forest foray in southern Ohio on Sept. 15, I encountered a northern copperhead, our third venomous snake species.

A copperhead could win a reptilian beauty pageant. The coloration and patterning is exquisite. After shooting imagery of the handsome young snake, I transported it to the safety of a distant woods

The snake was in the vicinity of a lodge where I was staying. A few employees were in the lobby when I entered, and curious as to their reaction, I mentioned the copperhead. Sure enough, one instantly blurted out, “Just killed two of them last week!”

Years ago, I was road-cruising in the same region late on a steamy summer night. Encountering a large copperhead on the road, I stopped for photos and to move it off the pavement. Suddenly a man materialized from the gloom. It turned out I had stopped near his shack, and once he saw the snake, he began an anti-snake rant. As Shakespeare’s Falstaff said, caution is preferable to rash bravery. I said my goodbyes, and that snake probably didn’t fare as well as the protagonist of this column.

Copperheads have the widest distribution of Ohio’s venomous snakes, but the range encompasses only a dozen or so southeastern counties. It once occurred throughout southern and eastern Ohio, but it has been eliminated from most areas. Although the bite would be painful, deaths are nearly unheard of

My sinuous friend was docile, as copperheads usually are, and posed beautifully. It was a juvenile, with a greenish-yellow tail tip. The latter feature is retained for the snake’s first three years or so. Apparently the young snakes use the bright tail tip as a lure. By holding it out, wormlike, they attract insects and then snap them up. Adults are efficient mousers, with rodents a dietary staple.

The possible reasons why people fear snakes are interesting. Some of it is undoubtedly innate. Scores of generations of our ancestors learned the hard way that bites can be dangerous. Caution is now hardwired into our DNA.

Unflattering portrayals, along with adults reacting badly to snakes in front of kids, have discolored their reputation.

Snakes have been here far longer than we, and they deserve space and freedom from persecution. The only way to pragmatically conserve them is to protect large swaths of habitat free from excessive human inhabitation.