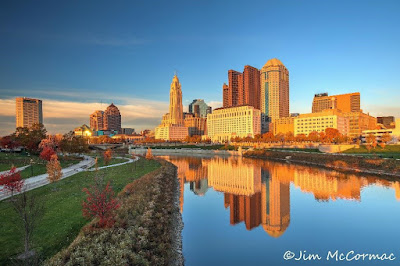 The city of Columbus, Ohio, as seen last evening just prior to nightfall. I made this image from the Rich Street bridge across the Scioto River, and the fading light cast the edifices of downtown in a beautiful golden glow.

I, and many others, were down here to see - and attempt to photograph - the largest "Supermoon" since January 26, 1948. The moon circles Earth on an elliptical orbit, and when a full, or new, moon coincides with the moon's closest approach to our little blue dot, we get the so-called Supermoon.

The proper term for this phenomenon is the perigee-syzgy moon, the perigee being the closest point that an orbiting body comes to its host. As it had been 60 years since the moon had been this close to Earth, people were understandably excited. And if you missed last night's celestial show, you'll have to wait until November 25, 2034 for a similar lunar performance. 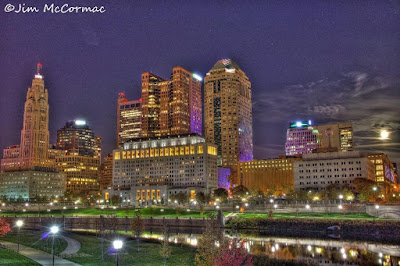 The Supermoon can be seen cresting the buildings of downtown, at the far right of the image. While certainly a nice moon, as full moons go, the Supermoon really isn't radically different in appearance than most other full moons. But hey, at least I can say I saw it.

Photographing the moon with an interesting foreground, such as a city's downtown, is tricky business indeed. Many (most? all?) of the really great photos one sees with a perfectly exposed foreground, AND a tack-sharp perfectly exposed moon are the result of Photoshop trickery - a bit of slicing and merging of separate images. I don't engage in that stuff, mostly because I primarily shoot natural history subjects and in general want to portray them just as my eye saw them in the field. And, equally important, I lack the technical know-how to do such things :-)

So, the best I could do with the moon/cityscape was to try HDR (High Dynamic Range) experimentation. The shot above is a merger of five different photos, shot in instant succession. The only camera parameter that changed between shots was shutter speed, so that exposure time varied between images. This allowed me to expose the city fairly well, yet not totally blow out (overexpose) the very bright moon. But this will only work when the moon is placed as a distant, minor part of the composition. As the moon moves surprisingly fast on its orbit, the overall lengthy exposure required by this technique means that the moon has moved enough during the duration of the exposure to introduce blur.

NOTE: The size of the uncompressed image above is massive - about 25 megabytes and that's using jpegs. When I compressed it, a necessity to post on the blog, there was a noticeable reduction in quality. Clicking the photo to enlarge will make it look somewhat better, but it looks really good at the uncompressed 25 megabyte file size. The series of five images which made this composite were shot with the Canon 5DS-R with its 50 megapixel sensor, the amazing little Canon 40mm f/2.8 pancake lens, at f/8 and ISO 400. Shutter speeds ranges were 13, 5, 2, 4/5, and 1/3 seconds. Camera mounted on a tripod of course, and fired with a remote shutter release while in live view. 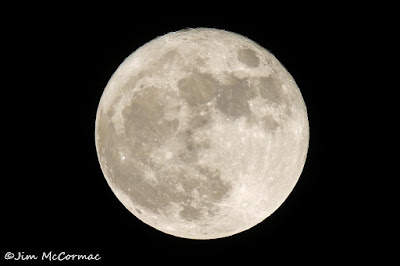 And finally, here it is up close and personal, the amazing 2016 Supermoon. After the moon had risen beyond the point where attempts at cityscape shots were possible, I pulled out the 500 f/4L II lens, with 1.4x teleconverter, and switched to the crop sensor Canon 7D II body. That combo offers 1,120 mm of reach - adequate for reaching FAR into the night sky.

I'll hope to be around, and still snapping pictures, when the next Supermoon orbits around in 2034.
at November 15, 2016

Email ThisBlogThis!Share to TwitterShare to FacebookShare to Pinterest
Labels: supermoon

That middle image is amazing when enlarged!