Maybe once a year, I get hit with the flu/cold/whatever it is, and it hammers me for a day or so. This was the week, and the flu-cold shut me down on Tuesday. Other than that, I made it to work every day. Unfortunately, some of the ill side-effects are a bit slower to depart, and I didn't feel up to any epic travels this weekend.

So this morning, I hit a few local hotspots with certain targets in mind. Two of which follow. 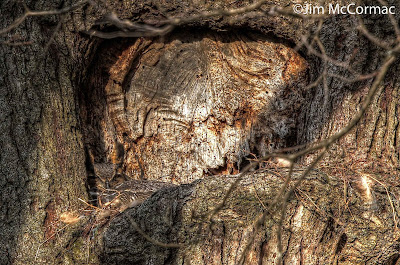 It appears that one of the local Great Horned Owl pairs has commenced the business of making owlets. This cavity in a massive white oak is a site used a number of times in past years by the owls. As she's been nestled into this same spot for over a week now, she must be on eggs. A typical clutch is two eggs, and the female owl does all of the incubation. The male earns his keep by bringing regular meals to her.

Late January is right on schedule for nesting Great Horned Owls in central Ohio. The female owl's extraordinary feathering allow her to maintain an incubation temperature of about 98 degrees even when the ambient air temperature plummets to minus 20 or colder. Such early breeding syncs the arrival of the baby owlets with the peak spring activity of striped skunks. Great Horned Owls are one of few predators that regularly make meals of skunks, and this striped delicacy is an entrée regularly served to many an owlet. 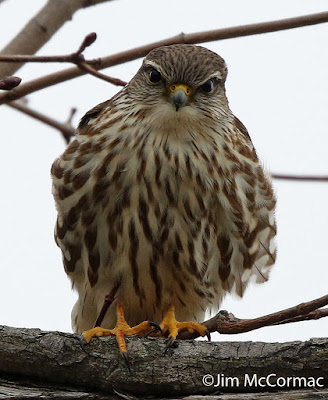 An utterly fearless Merlin glares at the cameraman. There was another nearby, occupying Union Cemetery in Columbus. They've been present all winter, and are remarkably tame even by urban Merlin standards. Nonetheless, I would not advise getting TOO close. One hundred or so feet away is plenty near for outstanding views, and the bird or birds will probably not even bother to register your existence at that range. Lest you wonder how I could get such a frame-filling image from afar, I was using a telephoto rig with the equivalent to about a 1120mm focal length. 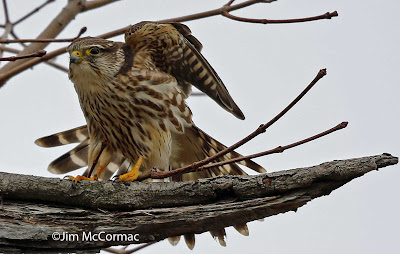 The Merlin stretches his appendages during a bout of preening. I noticed that his right foot and leg were still bloody. These small falcons are bird specialists, and I suspect the blood issued from a hapless songbird of some sort - maybe a starling if luck is with us.

I'm trying to force myself to be somewhat mellow until this flu-thing fades completely, so after about an hour with the Merlins, I headed for home. I'll hope to get back for some more, though. They're great fun to watch, because sooner or later, the hunger pangs will strike and the falcon will go on the hunt. Few things are as remarkable as the spectacle of one of these feathered bullets turning on the juice, flying down some luckless bird, and pulverizing it.

The owl photo is such an amazing example of camouflage!

I just saw a Merlin at the Gahanna golf course this weekend.