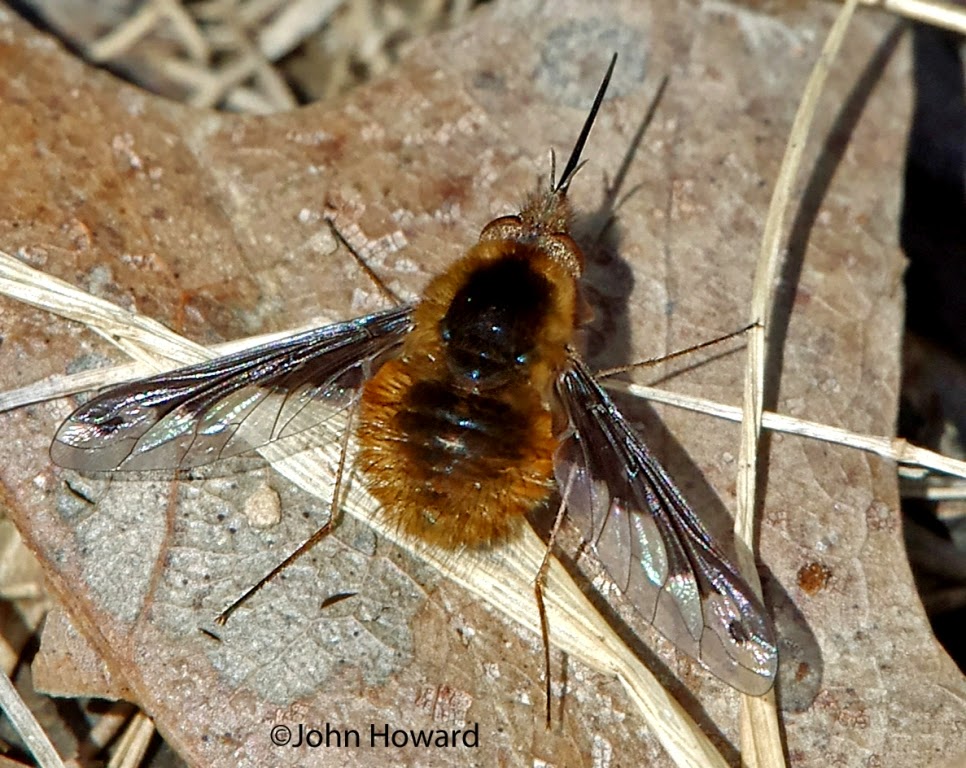 Perhaps you've seen what appear to be tiny, excessively fuzzy hummingbirds tapping flower nectar this spring. These hummer wannabes hover in front of dandelions, spring-beautys and other flowers, extracting the goods via a disproportionately long proboscis. These are the bee flies, in the genus Bombylius. I believe John Howard's fine photo above, and mine that follow, depict Bombylius major, a common species in these parts. Don't stick a fork in me if I'm wrong, though - it's a huge family, and I'm no Bombyliidophile.

This is the nearly mythical whale of northern seas known as the Narwhal. One of its teeth is modified into a greatly elongated tusk, making it a unicorn of the sea. Skip back to the first photo, then revisit this Narwhal photo. The bee fly might be called a "fly-whal", and indeed it has been. 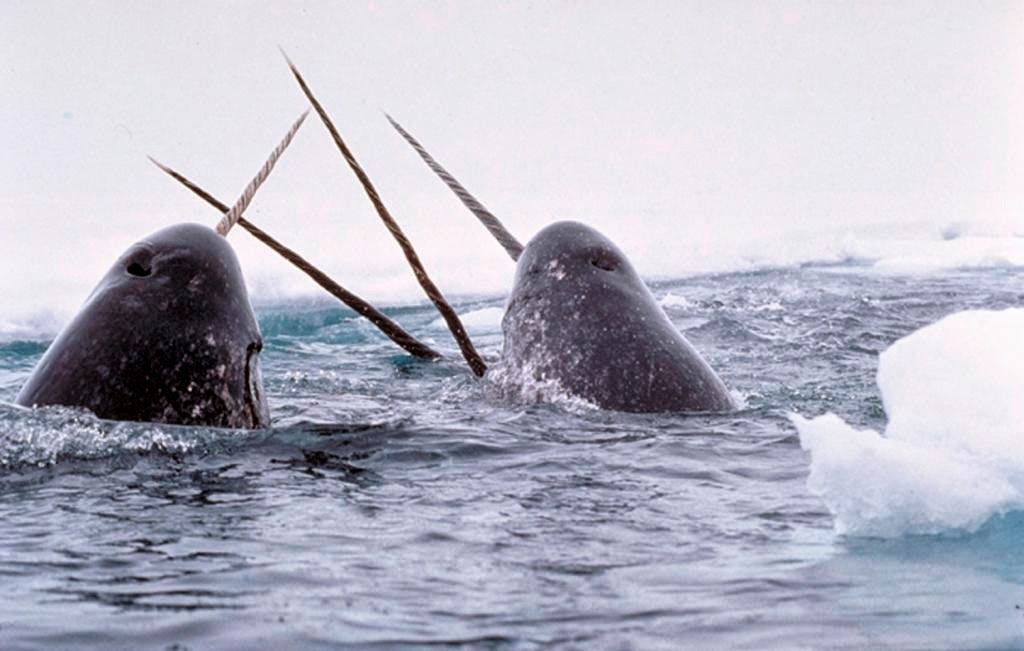 The Narwhals (females rarely have tusks) apparently have these protuberances as an outward sexual characteristic. The bigger the tusk, the bigger the stud, and the higher its status in Narwhalian social hierarchy.

The bee fly, on the other hand, uses its "tusk" to suck nectar from flowers.

On a recent excursion, I attempted to make nice photos of bee flies in action, but was thwarted by unusually uncooperative bee flies. I did manage this image, which shows one of the flies hovering before a gill-over-the-ground, Glechoma hederacea, and slurping up its sugary wares. That's what their tusk is for.

After much effort, I caught this bee fly in mid-hover last year. Territorial bee flies often hover for extended periods in sunny spots, chasing off other bee flies and other small winged critters. Most people who see one of these insects would consider them rather attractive, if not downright cute.

Bee flies, at least the aforementioned Bombylius major, are often found in the proximity of solitary bees.The animal above is a solitary bee in the genus Andrena, and they swarm about dry sandy areas in spring. Solitary bees dig tunnel-like burrows in the soil, which they provision with masses of pollen. Once an adequate stash has been stocked, the bee lays an egg or eggs in the burrow, and seals it off. When the bee larva emerges from the egg, it is as if it has been born into a giant ball of cotton candy. The grub eats its way through the pollen, and grows to maturity fueled by by tasty plant dust. This is about as Disneyesque as it gets in nature. Cute little bees that don't sting, digging charming little earthen bungalows, and feeding their offspring pollen.

A solitary bee digging a burrow. This bee had best hope a bee fly doesn't come along to shatter its dreams, and hopes of leaving a legacy. You see, the fuzzy little bee flies are parasitoids of solitary bees.

A female bee fly on the hunt lurks around the proximity of nesting solitary bees, awaiting the perfect moment. As the bee finishes its work in the burrow, and backs out to prepare to seal the entrance, the bee fly springs to action. She moves near, and flicks her eggs down into the chamber. If successful, the bee fly eggs get sealed in as well. You can guess the rest. The bee fly egg spawns a grub which eventually eats the host solitary bee's grub. And, apparently, the pollen, too.