A whole lotta plugs for various events on this here blog of late, I know. But late winter and early spring have become conference season in Ohio, it seems, and many of these events are well worth a pitch.
The Ohio Botanical Symposium is one of them. This will be the 13th year for the symposium, and it's grown like a weed. Your narrator pitched the idea for the symposium back in 1999, when I worked as a botanist for the ODNR's Division of Natural Areas. We started small - about 35 people in a classroom at the Ohio State University. The last go-round saw about 450 people, and the symposium has long since moved to much plusher digs.
So mark your calendar for Friday, April 5th, and check in HERE to register. The venue is the beautiful Villa Milano in Columbus. Following is a summary of the agenda, spiced with a few showy photos. It's a great slate of speakers and topics, any one of which is worth the price of admission. 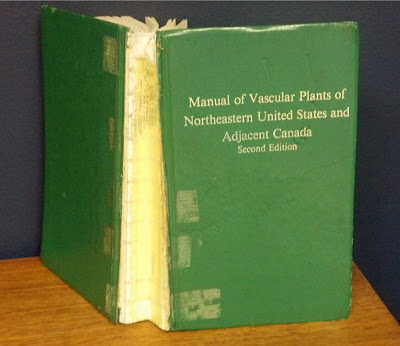 Rob Naczi will be in the house and delivering the keynote. Rob's in the Big Apple now, working as the curator of North American Botany at the New York Botanical Garden. He'll be talking about his work to revise one of America's most iconic botanical works, the book above.

The tattered book in the photo is my original copy, and it was probably one of the first that was sent out. "The Manual" appeared in 1991, and mine has seen a lot of use and abuse in the intervening two decades. A lot of advances in our knowledge of flora occur in 20 years, and it's time for an update.

The brainpower behind the 1991 edition of The Manual was also a botanist housed at the New York Botanical Garden - Arthur Cronquist. Cronquist was a living legend for much of his botanical career, which encompassed most of his 73 year life. Tragically, he passed away in 1992, the year after his epic revision of The Manual was released. 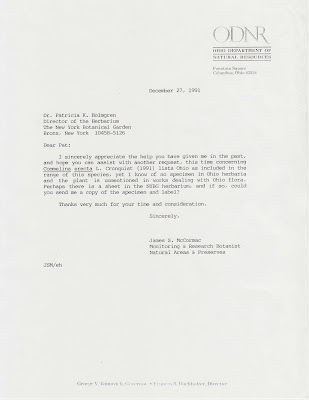 I have an interesting story about Cronquist's book. Upon receipt of our copies, I and my peers immediately devoured the pages, searching for new tidbits and marveling  - and trying to comprehend - the new "Cronquist" system of taxonomy. I found a new tidbit indeed, on page 656 of The Manual. Under the account for the Erect Dayflower, Commelina erecta, Cronquist stated that it occurs in "Dry, usually sandy soil... [including] O. [Ohio]". Whoa! We knew of no Ohio records for this interesting plant, but its presence here would certainly be possible. I figured that Cronquist, with his vast stores of knowledge and access to the NY Botanical Garden's expansive herbarium, was privy to something that we didn't know. So I dashed off the letter above to Patricia Holmgren, director of the NYBG. If you click the letter, it'll expand for readability. 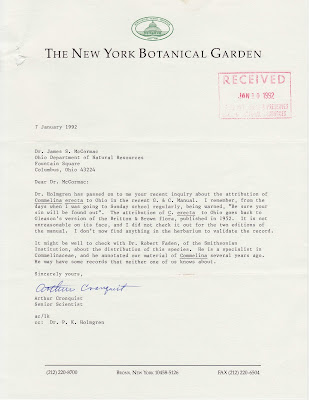 A few weeks later, I was floored to receive the letter above. The Man himself had written! Cronquist actually took the time to respond to my query, in his humorous style. That such an esteemed scientist - he was probably the most highly regarded active botanist in the country at that time - would take the time to respond to some unknown person in the heartland of Ohio made an enormous impression on me. As it turned out, he died only two and a half months after this letter was written.

Anyway, on with the talks. As has been done since the inaugural symposium, there will be a talk about the best plant finds of recent seasons, ably delivered by Tim Walters. The spindly little sedge above - a plant that perhaps only a botanist could love - was a star of one of the last Best Finds talks. It is Rocky Mountain Bulrush, Schoenoplectus saximontanus,  which was rediscovered by Dan Boone in Pickaway County in 2008. The last Ohio sighting prior to Dan's discovery was in the 1940's.

Judy Semroc, who is one of the region's best all around naturalists and photographers, will deliver a program on insect pollinators and their often specialized relationships with plants. Be prepared for plenty of stunning imagery.

One of the most entertaining and energetic botanical lecturers, anywhere, is David Brandenburg. He'll be talking about Ohio's asters, and that covers a lot of beautiful ground. Pictured is one of our most stunning species, the Smooth Aster, Symphyotrichum laeve.

Ginseng, Panax quinquefolius, is tops in value of the medicinal plants in our flora. Prices can hit $500 a pound for dried roots, and as a consequence the plant is becoming scarcer. Eric Burkhart of Penn State will explore the history of the ginseng industry.

Chris Bedel of the Cincinnati Museum will give a program on the 16,000 acre Edge of Appalachia Preserve in Adams County, one of Ohio's great bastions of biodiversity. Chris is a fabulously entertaining speaker, and full of knowledge about the area that he has managed and lived in for years.

I took this shot a few years ago at the base of the drive to the Eulett Center, which is the Museum's headquarters in the heart of the Edge. Our group was watching a Blue Grosbeak, teed up on that tree in the right center of the photo. Chuck-will's-widows nest just up the hill behind us. A half-dozen state-listed rare plants grow within a stone's throw. A cool katydid, recently described to science, is common in this spot. And the list just goes on and on...

Finally, John Mack will talk about a place that ranks high among the rarest of the rare, Daughmer Savanna in Crawford County. Nearly all of our prairie savannas have been destroyed, thus it was a major coup when Daughmer was purchased and protected as a state nature preserve a few years ago.

You won't want to miss the Ohio Botanical Symposium, so register soon, RIGHT HERE.
at March 27, 2013