Bobcat versus Raccoons, with bonus Gray Fox in catnip

I've said it before, and I'll say it again - the Hughes are trail cam masters, and they're doing amazing things with their candid cameras. If you've checked this blog with any frequency, you've probably seen some of the fabulous cam work by Laura and David, which they've been kind enough to allow me to share. Some recent examples are HERE, and HERE.

Laura just sent along their latest film-making endeavors, which feature a Mexican standoff between a tough Bobcat and two marauding Raccoons. It's pretty cool stuff, and she upped the ante by tossing in a neat video of a Gray Fox tumbling around in some fresh catnip.

I'm always flabbergasted by the amazing critters that the Hughes manage to find via their cams. This isn't luck - they know animal signs, and place the cameras in the right places. And remote and sparsely populated Monroe County, where they make these vids, abounds with wildlife. Of course, a little bait doesn't hurt, either. I've got the feeling that they'll eventually record something truly stunning - even better than what we've got here. 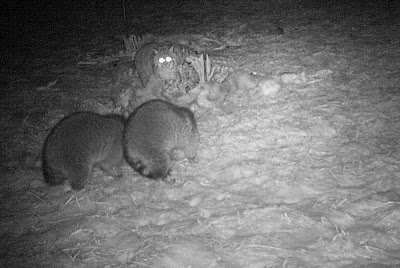 Puffed up and looking large and in charge, two Raccoons swagger into the deer carcass. Too bad someone even badder is already there. 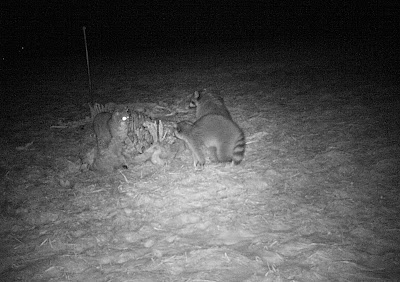 The Raccoons test the waters, as it were, and attempt to horn in on the deer carcass. Their bullying attempts do not dissuade the Bobcat, which bristles up and stands its ground. I suspect that, from a distance of two feet or so, that little cat's stare looks mighty intimidating. Were there audio accompanying these screen captures, I'm sure we'd be treated to some ear-splitting snarls and blood-curdling screams. 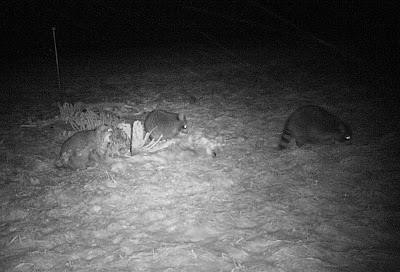 Here, we can see the Bobcat caught in full-throated yowl, and apparently that's enough for the band-tailed would-be robbers. They turn tail and amble off, looking for easier carrion.

Laura had two cams on this deer carcass - one shooting stills as seen above; the other video. Unfortunately, the video cam 's battery died before the cat/raccoon encounter, but before it conked it it did record this cool sequence of the Bobcat coming into the carrion.

Here's the bonus Gray Fox cavorting in catnip video. Spicing the ground strategically with a little Nepeta cataria can work wonders, and this fox reveals its catlike attributes by rolling around in the stuff.

Thanks as always to Laura and David for sharing their stuff!

Wow, what a cool post! Love these pictures and video. Not something we are likely to see in Urban Westerville so really appreciate these!

They just have way too much fun with their trail cams-I have to get one.

Thanks for your comments, and the Hughes' work is indeed cool. And I don't think we've seen nothin' yet!