One of the many plume moth species at rest under your blogger's porch light, tonight. It's certainly cool outside, but a chill 50 degrees is warm enough to bring out the last of our straggling moths. Plume moths - at least some of the species - seem to be among the last of the moths to survive into late fall and early winter.

A gentle prod with a finger stimulated the animal to splay its legs and antennae. I believe this is a female, going by the narrow wiry antennae, and I will take a semi-educated guess that it is the Morning-glory Plume Moth, Emmelina monodactyla.

Plume moths are very distinctive as a group. When at rest, their tightly inrolled wings and cylindrical body form a T-shape. As you may have guessed from the common name, the caterpillars of this moth feed largely on members of the morning-glory family, although they also apparently eat a number of other low weedy plants. 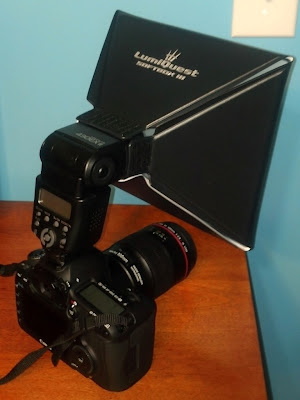 Taking photos at night, and/or of macro-type objects is always a tricky business. Thanks to a tip from Jack Hoying, I recently got the cumbersome looking boxlike contraption above. It is a Lumiquest Softbox III, and it quickly attaches to the camera's Speedlite flash via quick-release velcro tabs. Tonight is the first time I've had a chance to fool with it, and I look forward to working more with the softbox. Under friendlier conditions, too - shooting moths on a rather blase wall under the glare of a nearby porch light never achieves really great results, no matter what one does.

Diffusers such as this device soften the flash, and can help achieve some really remarkable photographs.

That's an amazing moth! Good luck with the diffuser, I'm very happy with mine. Using the diffuser dome that came with the flash, inside the diffuser helps spread the light a bit more. At the least, make sure the flash zoom is at it's widest setting.

I was at Midwest Photo Exchange today for some Black Friday deals. It was a very busy place!

I did see one of these on my screen door last summer....I nik-named it the "T-square" moth...quite perpendicular! so glad to know it's real name... I have run into your blog a few times now...perhaps I will try to make it to one of your visits, my daughter is moving to Black Lick area and I noticed lots of parks and I believe you are going to be at one! so I will plan a visit! I am not new at finding nature to photograph, just new at photographing it...it envelopes my whole being and i could do nothing but chase butterflies and damsel flies, question marks and commas around forever and ever:) we had a street light beside my last little house and visits from many moths I had never seen before; quite mystifying to discover this new world out here been here for ages and want to keep it that way. thank you for your work. Beautiful shot!