Pastoral Holmes County, Ohio, which is near where the Lark Bunting of the previous post was found. Old meets new at the intersection at the base of this hill: a pickup truck rolls up, as does a horse-powered buggy. The latter is the primary conveyance of this area's large Amish community. 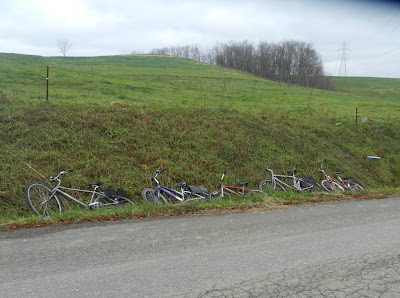 Two-wheeled pedal-powered modes of transportation are also common. These bicycles were probably hurriedly cast aside as their riders rushed off to look for the Lark Bunting detailed in my PREVIOUS POST, as this is the scene of that great rarity.

Hallie Mason dropped me a note with more details of this buntiferous find, and also allowed me to share a few of her photos of the scene. Leroy Erb was the bird's finder, and did it in spectacular style. He was strolling along this very road when an unfamiliar call note reached his ears. Hmmm. He tracked down the bird, which was unfamilar to him, but before even reaching home and his guides, Leroy had sorted through the possibilities and arrived at the correct identification. 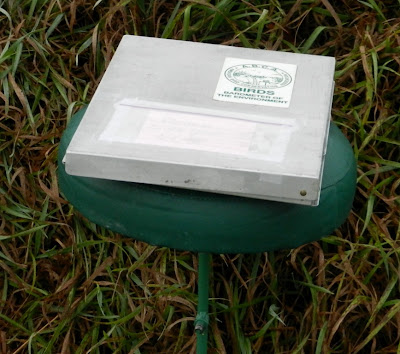 This humble green hunting stool, perched along the roadside, holds the sign-in log. Scores of visiting birders have made the pilgrimage to see Leroy's rare find.

Why such a preponderance of rarities? This region has no Lake Erie or Ohio River, nor is it ridged with mountains, carpeted with virgin prairie, nor cloaked with old-growth woods. While Holmes and Tuscarawas counties are not heavily developed, and have lots of agricultural, the human footprint on the land is far lighter than it is in the glaciated flatlands of western Ohio, where agribusiness has laid waste to the landscape. The Amish and others in the Holmes County area engage in land management practices that are far more environmentally friendly than is the case in most other farmland regions of Ohio.

But the real reason that so many rare birds turn up so consistently in this area is the people. Some 40,000 Amish reside in this region, and their ranks include some of the best birders in the state. Also, a high percentage of the Amish community is far more bird-literate than the average population, so there are lots of knowledgeable eyes and ears out on the ground. Little in the way of avian occurrences seem to be missed.

Also, the Amish shun cars, and that choice greatly frees one to become more in tune with the environment. When confined to a motorized, nearly hermetically sealed automobile, the occupant cannot hear nor see birds - or most other things - nearly as well as someone on foot, riding a bicycle, or even in an open horse-drawn buggy.

I want to point out two things of interest to birders that visit the Holmes County area. One, if you have any optical needs, be sure to visit Time & Optics, which is run by uber-birder Robert Hershberger. His place is, by far, the most well-stocked and comprehensive optics shop in the state of Ohio. As an added bonus, Robert is the nicest guy you'd ever want to meet, and he knows everything there is to know about anything that you peer through to better see birds. And while you're up there, you can go bird some of the local hotspots, and eat at one of the sensational Amish restaurants. Time & Optics info follows:

Finally, mark Saturday, March 16, 2013 on your calendar. That's the date of next year's ever-popular Shreve Migration Sensation, one of the highlights of Ohio's birding festival circuit. There's no better immersion into birding Amish Country than a trip to SMS. The organizers don't yet have next year's itinerary posted, but CLICK HERE to see the 2012 details - that'll give you a good taste of what SMS is all about.

Thanks to Hallie Mason for the added info and pics, and of course major kudos to Leroy Erb for discovering the Lark Bunting.