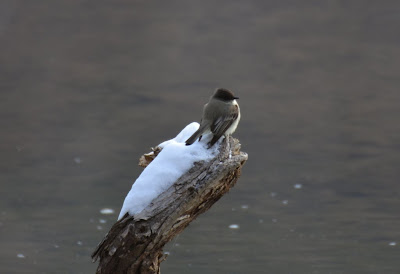 Eastern Phoebe, Sayornis phoebe, Jackson County, Ohio. December 18, 2010, 21 F.
Phoebes are tough as nails, and I've seen them often in wintertime Ohio. But I was a bit surprised to find one last Saturday on the Beaver Christmas Bird Count. Extended freezing temperatures had created an icy winter wonderland, and the evenings have been downright frigid.

But there it was - a hardy little flycatcher, hanging out near the only open water that we saw. Even in the midst of wintery weather, some insects will remain active in such haunts, and phoebes will attempt to make it on what has to be meager pickings. Need be, they'll dine on fruits such as sumac to get by.

Oh, poor little thing. I always look forward to their return in the spring. I've heard that sometimes they will winter at these latitudes, but I imagine that must be very rough for a flycatcher. I wish it well.