Dane Adams recently sent along a few of his typically stunning photographs, these of raptors that he found at Big Island Wildlife Area. And equally stunning is the Short-eared Owl photo, taken by Russ Reynolds and also at Big Island. All of them are arch-enemies of the mouse in the previous post. 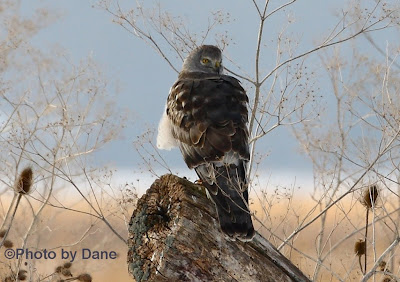 Northern Harrier, Circus cyanea, male. Harriers can look quite owl-like when seen perched, as in this photo. They have exceptional hearing, and use this sense to track prey, probably to a much greater degree than most other hawks.

In flight, harriers are a snap to identify. They typically hunt low over meadows, rocking and tilting in a manner suggestive of a Turkey Vulture. Long pointed wings and a conspicuous white rump clinch the ID. 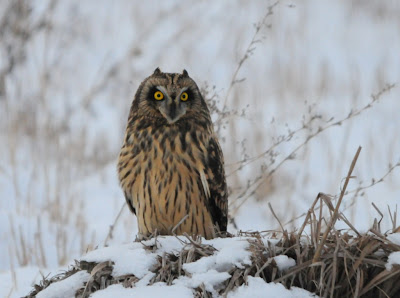 Short-eared Owl, Asio flammeus, photo by Russell Reynolds. These odd owls hunt open meadows, and often engage in comical conflicts with Northern Harriers, which hunt in the same places. Their ears are truly short, and rare is the opportunity to observe them. 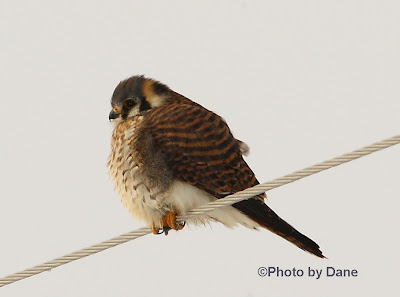 A beautiful female American Kestrel, Falco sparverius, in typical wire-sitting pose. This is our smallest falcon, and a raptor that has suffered significant population declines in parts of its range. The reasons for such losses are varied, and include habitat loss, large-scale conversion of lands to exceptionally "clean" agriculture that greatly reduces kestrel food, pesticide use that triggers downturns in insect prey populations (kestrels eat lots of grasshoppers in summer) and increased competition for nesting cavities. A more insidious impact, at least in some areas, may be the spike in Cooper's Hawk populations; these aggressive accipiters are reported to take kestrels.
In the very long term, kestrels in Ohio are probably a "boom and bust" species. Prior to European settlement, most of the state was densely forested and generally not good habitat for a raptor that frequents open places. As settlers cleared the land of trees, much suitable habitat was created and kestrels moved in and prospered. Now, the hand of man is tilting the odds against kestrels. 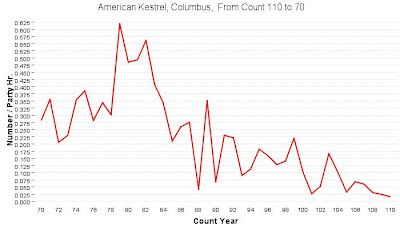 Forty years of American Kestrel data from the Columbus, Ohio, Christmas Bird Count. Not an encouraging trend, and it isn't hard to find similar cases of decline. 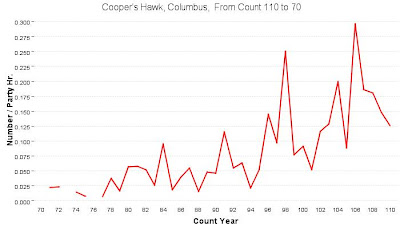 Cooper's Hawk data, also from the Columbus CBC and for the same years. Again, not an uncommon trend in many areas. While hawk predation may play a role in the decline of Columbus kestrels, I would say - based on over 30 years of participating in this count - that habitat loss is factor #1.
If you would like to learn more about kestrels and their status, check out this research from Hawk Watch International.
at December 28, 2010

Yes, Ben - last years' count was 110. The counts began in 1900, and are numbered sequentially up to the present.

We seem to have a lot of Kestrels in this area, at this time. Carroll Twp. and Benton Twp., in particular, seem to be teeming with them. I have been spending some lunch hours birding from my car and most days I spot 3-4 Kestrels during my lunch hour.

Another year full of consistent and regular posts on beautiful birds.

Thanks for your perseverance and keep on sharing your ornithological love with us!

Good to know there's lots of kestrels somewhere, Randy. It's a noteworthy observation anymore around Columbus.

And thank you for your comment, Shiluk - I'm glad you read and enjoy this blog!

Jim,
I think Coopers hawks are the main cause. Around Dayton if I see a kestrel it has wide open country on at least one side of its perch. They have mostly disappeared from urban and edgy places. A decline in insects would make more sense if other birds that utilize this prey were experiencing these declines. My 2 cents, keep up the great blog.
Dave Nolin