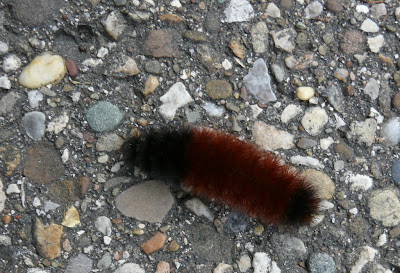 A "woolly-bear", possibly the most recognized caterpillar in these parts. It's the larva of the Isabella Tiger Moth, Pyrrharctia isabella. Countless thousands of people can instantly recoginze the caterpillar; probably only a minute fraction of a percent could identify the moth.

This has been a boom year for moths and butterflies, and you can count in the woolly-bears. I've already seen scores of them, mostly crossing the roads, and many others are reporting lots of the little tubular fuzzies. Woolly-bears are stricken with a wanderlust in late fall, and that's why we see them roaming far and wide. 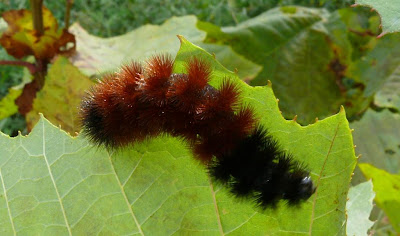 A well-known old wive's tale has it that the severity of the coming winter can be forecast by the woolly-bear's stripes. A big wide brown band and it'll be a mild one. Mostly black, and the bear is telling us we're in for a frigid winter. The bear above, being dominated by brown, is indicating an easy winter to come.

Hope the forecast is right and you have a mild winter.

Yes! A mild winter is what we need. I saw a woolly bear a few months ago and it told me the same thing.

Many reports of black woolly bears are coming in. I am moving to Florida!

(Maybe they aren't really wooly bears but that other what's-it-called cat that is supposed to be all black?)

Jim, I've been seeing mostly brown Woolies, so don't pack your bags yet. Those reporting the black ones must be up in the northern part of the state! I've been surprised to see a number of sulphurs still hanging on and flying this late in the season. I saw one just this past Thursday, its flight accompanied by the chirps of crickets in the field. It always make me sad when the insects finally go silent for the season. (By the way, I'll see you in New River in May!)