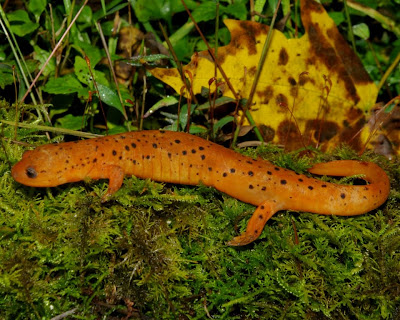 Midland Mud Salamander, Pseudotriton montanus diastictus. Photo by John Howard.
This special treat comes to us courtesy my friend John Howard of Adams County, a naturalist extraordinaire. Probably no one knows more about the natural history of Adams and Scioto counties - Ohio's most biodiverse region - than does John. He routinely makes great finds, and is always a hoot to get out in the field with.

John recently found a new site for the rare Mud Salamander in southern Ohio's sprawling, 65,000 acre Shawnee State Forest. As you can see from the photo, these viscous little beasts are quite the charmers. Too bad they mostly remain out of sight, buried in gelatinous mire under rocks in springy outflows.

This species is known from only a few counties in southernmost Ohio, and is considered threatened in the state. It isn't a species that one normally just stumbles across, and kudos to John for working the habitat and finding these secretive little wrigglers.
at October 13, 2010

Jim, when we were kids we seemed to find salamanders under just about any old rock, log, etc. I can't remember the last time I found one. Are their populations declined from the 60's?

Way cool! Do Two-toed Amphiumas make it into Ohio? We get 'em down here in Florida but I don't know their northern limit. . . .

Hi Randy. There are concerns about declining amphibian populations in general. Salamanders, too. They've certainly declined in these parts due to habitat loss, and maybe other factors, but in some parts of Ohio it's possible to find good numbers and diversity.

I wish Two-toed Amphiumas were here, Vince! They're well to the south, though. If you are reading this and haven't heard of this species, it is a massive snakelike salamander that can reach three feet or so.

One of my favorite salamanders from Ohio and I miss them dearly. I found one at a seep, as well as a red salamander, with John Howard back in 2006 during a herp bioblitz in the spring. They are more common than thought in SE Ohio, especially in the Adams/Scioto area.

I caught one of these (or maybe something really similar?) in a minnow trap I placed in a spring stream near my home. Problem is, this Ohio species is the closest thing I have found to what I caught, and I live in Maine. I'm used to 'Red Backed' and the Blue Spotted, But yellow orange, and roughly 10" in length? Not something I've seen in my 20 years and my uncles who are all in their 40/50's haven't either.