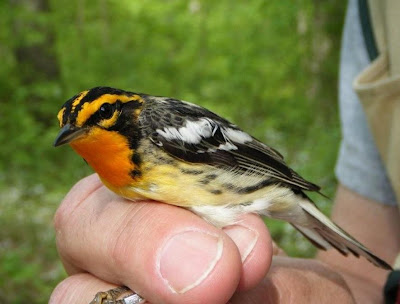 Resplendent in black, white, and orange, a male Blackburnian Warbler poses reluctantly for the camera. This is a second-year male; he'll probably brighten even more with age. This bird was caught by Kelly Williams-Sieg, who is conducting research on breeding birds in a remote of Tar Hollow State Forest in southeast Ohio. Imagine her surprise when she snared this beauty! Blackburnians normally dwell high in the canopy. He's come a long way, too. Blackburnians winter in northern South America, a few thousand miles to the south of where Kelly caught this bird. They breed in boreal forests of the northern U.S. and eastern Canada, their range largely mirroring that of a preferred tree, the Eastern Hemlock, Tsuga canadensis.

Sometimes people wonder about the odd name, Blackburnian. The warbler bears the name of Anna Blackburne (1726-1793), who was the daughter of a wealthy salt merchant in England. Anna devoted herself to the study of natural history, and her brother, who had gone off to live in the United States, sent many bird specimens back across the pond to her. Dendroica fusca was named by Philipp Ludwig Statius Müller, and the orange-breasted stunner has long worn its English name to commemorate the accomplishments of Ms. Blackburne. 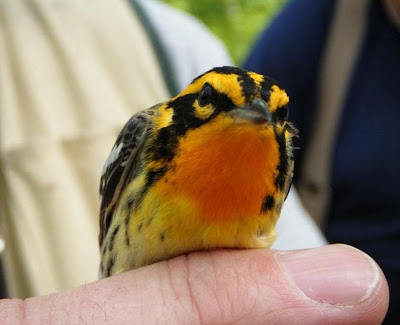 More than a few non-birders have suddenly been confronted by the sight of a male Blackburnian Warbler bursting into view, its breast glowing like burning embers. Only the most intellectually challenged would fail to be awed, and it'd only be natural to wonder just what the heck the bird was. If this happened to you, and your curiosity was piqued to the point of wanting to learn more about birds, the Blackburnian would be your "spark bird".

From such humble beginnings come some mighty and all-consuming addictions, and one of the greatest birding addicts of all time was sparked by a Blackburnian Warbler. In 1965, one of these flamethroats burst into Phoebe Snetsinger's field of view, and she became consumed by birds. This lust morphed into a quest to see as many of the globe's 10,000 bird species as possible, and by the time of her death in 1999, Phoebe had seen about 8,400 of them. This record has since been eclipsed - barely - by two or three people, but remains a mind-blowing accomplishment.

It is amazing the effect that birds can have on people, but when one views a creature as flashy as this Blackburnian Warbler, it isn't hard to see why.