Who doesn't like kingfishers? They're interesting, colorful, have fascinating habitats, and look, well, funny. Too bad they don't like us. Or anything else, for that matter. Kingfishers are one of the more antisocial families of birds - they don't even like each other, most of the time. Loners through and through, once the brief breeding season has ended, they revert to their solitary ways.

Ever been walking along a stream or lake, when you heard the loud rattling of a Belted Kingfisher? It was likely YOU that it's cursing. They don't like intruders in their turf, and will vigorously scold anyone or anything that irks them.

Female Belted Kingfisher. Males are less gaudy, having only one blue belt. This species is tough for a bird that depends on diving into the water to procure prey. They'll tough it out in northern latitudes, as far as they can dependably find water. If she spots a creek chub or some other tasty fish, she'll hover briefly over the target, then plunge headlong into the icy waters. Just before striking the water, the bird will close its inner eyelids, and then snap up the fish with its pincer-like bill. The hapless victim with then be flown to a convenient perch, and likely beaten mightily against the branch until thoroughly stunned, then it'll be swallowed. Don't come back as a minnow and let yourself fall into the sights of a kingfisher. 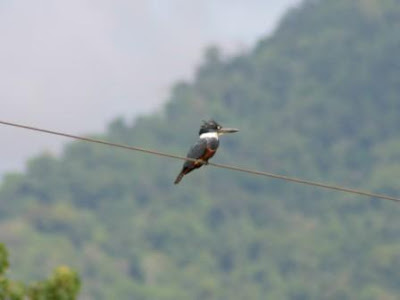 Ringed Kingfisher - like a Belted Kingfisher on steroids. These monsters are pretty common throughout Mexico and Central America, and on into South America. There should be no confusion with Belteds; Ringeds weigh nearly twice as much, and look very bulky. They make a really loud staccato machine gun-like rattle. Ringed Kingfishers are a lot like Belteds in that they often favor conspicuous perches, are quite vocal, and generally can't be missed. That's certainly not the case with all of the kingfishers. I took this shot last February in Costa Rica. With luck, I'll be seeing more of them within the next day or two.

The furtive Green-and Rufous Kingfisher - a jawdropper of a beauty. There are about 90 species of kingfishers worldwide, and this one has to rank near the top in good looks. They favor dense jungle, and tend to hunt from gloomy, shady spots, thus they're often tough to see. G & R's aren't particularly common, but range over a wide swath of Central and South America. I got this shot in 2006 from a boat, as we explored the jungle canals of Tortuguero National Park in Costa Rica. I'll be back in this same jungle in a few days, and will hope to see more Green-and-rufous Kingfishers. 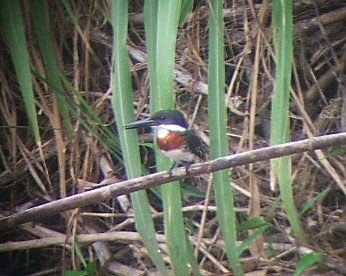 Amazon Kingfisher, which looks like a large Green Kingfisher. It's a bit smaller than a Belted Kingfisher. They occur from southern Mexico on south to Argentina. They're pretty common in Costa Rica, and won't be missed.
I regret that I wasn't able to get a photo of my favorite kingfisher - the American Pygmy Kingfisher. These micro-divers are as cool as birds get. They're only five inches long, and weigh about the same as a Song Sparrow. Pygmys aren't rare, but they frequent the impenetrable mangrove thickets along the coasts of Costa Rica, and thus can be easy to miss. We had wonderful views of one in '06, and will be back in good habitat for them on this trip. I'll be trying for some good photos.
Internet access is iffy where I'll be, but if the forces conspire to allow me to connect to the Internet, I'll try and toss up some photos of a much warmer place than Ohio!
at January 19, 2009

Fantastic post, Jim. Most of us in the northern U.S. have no idea how diverse kingfishers are throughout the Americas and the world.

I've got one photo of an American Pygmy Kingfisher but it's pretty much a speck!