Wow! Without a doubt, the highlight of the 2007 breeding season in Ohio was the discovery of a pair of Mississippi Kites nesting at the Brass Ring Golf Course in Hocking County. First discovered back in June by Rick Perkins, a skilled birder who just happened to be there on a golf outing, the kites have become avian celebrities and many birders have come to visit.
When Rick first found them, he saw two birds and even watched them copulate - always a good sign of potential breeding :-) Word soon got out, but relatively few people were able to spot both birds with certainty.
For a lengthy period in July and into August, only one individual was seen at any one time, and it appeared that either the other adult had left, or it was sitting on eggs. Because telling the sexes apart is not easy, it was hard to tell if everyone was seeing the same bird or both adults, just at different times.
Fortunately, the bird(s) could almost always be observed from Keller Rd., which runs adjacent to the course. It just would not have been possible to allow access to everyone into the depths of the golf course, where the birds often hung out and into the vicinity where we suspected the nest was. Not only would lots of people on the fairways honk off the numerous golfers that use Brass Ring, it would have not been feasible froma liability point of view.
I developed a rapport with the manager, Chad Galloway, who became quite interested in the birds, as did some of his employees. We asked Chad to let us know if anything at all changed with the birds, and to be especially alert for signs of nesting. Last Tuesday, he called to report that he had seen three birds together, which needless to say was exciting news. He further reported that one of the birds was quite vocal - typical of a young kite.
So today, Aaron Boone, Scott Albaugh and myself drove down there to check things out. Within a few minutes of arriving at "ground zero" within the course, we saw an adult kiting high overhead. It wasn't long after that we spotted "Junior" as he came to be known. From then on, we were treated to long looks of the juvenile as he begged for food, and was brought scrumptious morsels of cicada on a regular basis. Junior still had down feathers protruding, and probably has not been out of the nest very long, but he can fly pretty well. Still has a ways to go in the bug-catching department; we saw him take a crack at an unidentified large butterfly but he choked badly.
We got many photos, and Aaron with his digiscope rig really pulled out some awesome ones. He gave me permission to share some of those here. 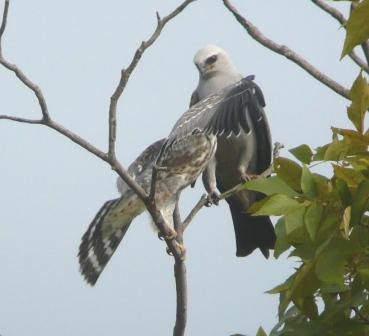 Here we have Junior, high in the boughs of a Shagbark Hickory, begging for food as the adult looks on sternly. Junior would sit up there for long periods, and when he spotted an adult would start to give a two-toned whistle reminiscent of an Olive-sided Flycatcher. His whistling would increase in intensity as the adult neared. 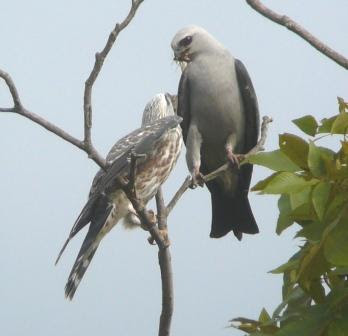 You can make out the insect in the adult's bill, which is probably a Swamp Cicada or some other large species of cicada. We were able to see the prey well enough through the scope to determine that nearly all of the insects that were brought to Junior were cicadas. It was interesting to watch the adult as it hunted low over the forest canopy. It apparently trolls the tree tops waiting for a cicada to fly out, and then pounces. Quite a feat, as cicadas often fly like speeding bullets in direct lines. 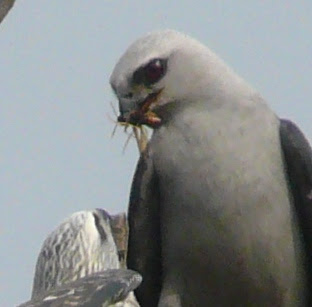 Here's a closer view of the adult with an insect. Not sure this one is a cicada. Whatever it is, Junior scarfed it up rapidly like everything else given to him. For one period of about an hour, he sat in the hickory and had twelve meals brought to him. As the adult neared the tree, it would quite deftly transfer the insect from talon to bill, then quickly hand it off to Junior and get out of there, the transfer normally lasting only a few seconds. 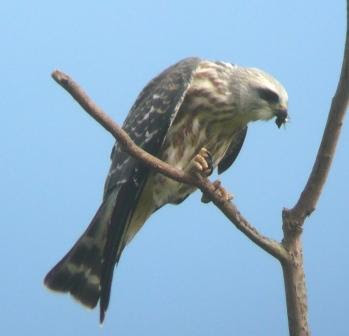 A good look at Junior, holding a cicada. He/she is quite striking, with rich chestnut brown striping below and an intricate pattern of white feather edging above. Its prominently banded tail can also be seen here.

I want to thank Rick Perkins for finding the bird and making us all aware of it. I'm especially grateful to Chad Galloway for taking an interest in the kites, and playing a key role in enabling us to document the successful nesting. This is the first nesting record for Mississippi Kite in Ohio and as far as I know, the northernmost nesting record anywhere to date. Lets hope they return next year. We'll go back in in December after the leaves have fallen, and see if we can't find the nest. We have a strong idea as to the locale, but dense leaf cover has kept it hidden from us so far.

Fantastic photos from Aaron and a great story!

I have been trying to identify a raptor that has chosen our property as part of it's territory and they look EXACTLY like Mississipi Kites. I've been unable to see them really up close, and they are such fast and agile fliers it's next to impossible to get a photo. I live in SW Ohio, near Eastfork State Park, but we had a pair of birds that look like these, for the last two years here. I cannot say I have seen young or a nest, but I have seen a pair flying together. Wish I could get a photo and know for sure, but the pics I've seen of them flying are identical to the birds I've seen. They are the fastest fliers I've EVER witnessed! I seen an article in Raptor's Newsletters and noticed right away they looked like the birds I saw, then googled them for a color picture.