Last Sunday, December 4, I took a trip to one of my favorite Lake Erie hotspots, the municipal pier at Huron, Ohio, in Erie County. I was undecided about any trip until late the night before, due to some pending projects, but ultimately felt it was in my best interest to get out for a while and try to trip the shutter on some interesting targets. And I found a completely unexpected and mega-interesting target. 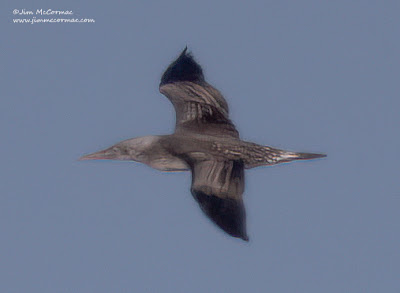 A juvenile Northern Gannet (Morus bassanus)! The mouth of the Huron River and nearby Lake Erie was teeming with gulls, mostly Ring-billed and Herring gulls. A smattering of Bonaparte's Gulls, and at least one Lesser Black-backed and a few Great Black-backed gulls, too. I had walked out to the furthest southwestern corner of the riprap wall surrounding the huge dredge impoundment on the west side of the pier, as this position offered a commanding view of the action, and the light was good.
I wasn't in position for ten minutes when I saw an enormous bird cruise in from the direction of the open lake. I got my big lens on it ASAP and verified that it was indeed a gannet. The camera was all set for action, as I was already focused on shooting birds in flight. The Canon R5 was in electronic shutter mode, which yields a burst rate of 20 frames a second. Unfortunately, the gannet was at a distance of perhaps a quarter mile or so and never came nearer than that. But fortunately, I was shooting with the Canon 800mm f/5.6 lens, and had the 1.4x extender attached, making for an 1120 mm lens. Even with that firepower, this image was the best that I could do - and it's extremely cropped - but it leaves no question regarding the identification.
Northern Gannets are certainly not unprecedented on Lake Erie, but they are great rarities. They appear every few years, but I think the last report prior to this one dates to 2017. It's the third gannet that I've seen on Lake Erie.
Within a few minutes of the bird vanishing towards Cedar Point to the west (I got to watch it for perhaps 2-3 minutes) I got word out to the birding community via Facebook. And scuttled my other plans to hit other lakefront locales. I proceeded out to the end of the pier, which offers a commanding view of Lake Erie, and hoped the big bird would reappear. A number of other birders stopped by as well, but at least by the time that I left around 3:30, the gannet had not reappeared. Hopefully it will turn up in the area again and others can see it. The lake between Huron and Cleveland is the zone for wayward gannets on Lake Erie, and that's where most Ohio records come from. 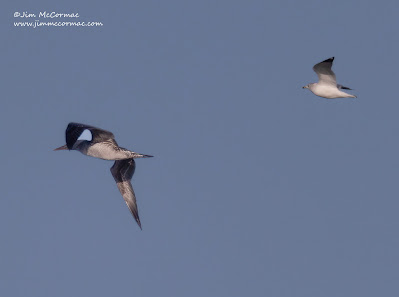 This is the first image that I took of the gannet, shortly after spotting it. The big seabird dwarfs the nearby Ring-billed Gull. I suspect that gannets that appear on Lake Erie or elsewhere on the Great Lakes originate from the massive colony (100,000+ birds!) on Bonaventure Island at Perce, Quebec. That's the red dot on the Google Earth map above. "Ile Bonaventure" sits at the terminus of the Gaspe Peninsula, in the expansive Gulf of St. Lawrence. This is the outflow for the entirety of the Great Lakes. I believe all Ohio gannet records are of juveniles. Apparently, the naive youngsters mistake west for east, and instead of heading out into the Atlantic Ocean to winter with the other gannets, the wayward birds head up the St. Lawrence River and inland. They pass by the iconic Canadian cities of Montreal and Toronto, through Lake Ontario, on past Niagara Falls and up the Niagara River, and into Lake Erie. It's about 1,100 miles from Bonaventure Island to Huron, Ohio, as the gannet would fly.

A juvenile Northern Gannet in the Atlantic Ocean off Ocean City, Maryland. I made this image on February 27, 2022, during a pelagic seabird trip run by George Armistead and his company, Hillstar Nature. We saw many gannets, of all ages.
It takes gannets 4-5 years to attain full adult plumage. After their first (juvenile) year in which they are all brown like the bird that I photographed, immature gannets start to develop a patchwork of white. In general, they go from darker to whiter but there is great plumage variability even among gannets of the same age. All or virtually all Lake Erie gannet records are of brown first-year birds.
A smattering of the 100,000+ Northern Gannets that nest on Bonaventure Island in the Gulf of St. Lawrence. This is the likely source of origin for wayward juvenile gannets that appear on the Great Lakes. I made this image on July 1, 2018.
at December 06, 2022