Nature: Everything's coming up rabbits, thanks to 2022 bunny baby boom 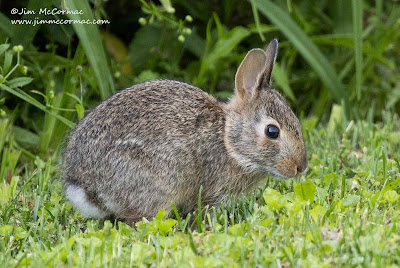 A young eastern cottontail in the writer's Worthington backyard/Jim McCormac

Nature: Everything's coming up rabbits, thanks to 2022 bunny baby boom

Columbus Dispatch
July 31, 2022
NATURE
Jim McCormac
One of our most familiar mammals is the eastern cottontail. It is also one of the most prolific mammalian reproducers. Apparently, the rabbits have been hard at work, as there seems to be bunnies hopping everywhere this year.

Just about everyone that I’ve asked has seen lots of rabbits, probably more than normal. So have I. My local cottontails have been above average in producing kits, and they are a daily feature of the yardscape. One magical morning, I glanced out back to see six — two adults and four little ones — gamboling around.

Last spring, I saw their incredible courtship display on several occasions. A buck and doe will square off, acting tense and jerky. Sometimes the doe, apparently irked by the amorous buck, will literally rabbit-kick it with her front paws. This can stimulate the male to charge and spray urine at her — a dating strategy perhaps best left to the bunnies.

Soon they’re rushing one another, with a rabbit springing straight into the air like a furry pogo stick. Sometimes the airborne bunny will twist 180 degrees in mid-flight so that it’s facing the other rabbit upon landing.

The jumping exhibitions are interspersed with chases and other high-speed antics. This is all a precursor to making more bunnies, something that rabbits are quite good at. Cottontails are prolific breeders, with females able to produce five or more litters of up to eight kits, each season. Some of those kits will produce litters in their first year. It doesn’t take a mathematician to realize that we could quickly be awash with rabbits.

This is where the predators come into play. Rabbits might be thought of as hopping steaks, at least if you’re an animal that likes to eat them. And plenty do, including coyotes, foxes, hawks, owls and weasels. Tiny kits still in their ground nest are especially vulnerable, and crows and raccoons often prey on them.

I once came across a great horned owl on a rural Ross County lane about 2 a.m., sitting atop a freshly killed rabbit. The enormous owl glared ferociously at me, refusing to relinquish its prize, a testimony to its tastiness. Finally, it dragged the carcass up the steep road bank, the rabbit apparently too heavy to get aloft. I passed by, the owl skewering me with its huge yellow eyes.

I’m not sure what happened this year to trigger such an apparent rabbit boom. Perhaps I’m misreading the situation, but I’ve seen bunnies galore about everywhere I go — and I do travel a lot. Even a trip to the prairies of western Indiana and adjacent Illinois produced scads of rabbits. These observations, coupled with numerous similar reports from other observers, lead me to believe that 2022 was an exceptionally good year for cottontails.

Perhaps certain predators, especially coyotes and foxes, are down in numbers. These wily hunters are exceptionally adept at picking off rabbits.

Gardeners might find themselves stocking the rabbits’ table more than usual. But green thumbs can take solace in knowing that the fuzz-tailed plunderer is one of our most interesting and successful animals, and that the rabbit has hopped on Earth for far longer than humans have been around.

“My point is that when you look at a bunny and can only see a pest, or vermin, or a meal, or a commodity, or a laboratory subject, you aren’t seeing the bunny anymore.”

Naturalist Jim McCormac writes a column for The Dispatch on the first, third and fifth Sundays of the month. He also writes about nature at www.jimmccormac.blogspot.com.
at July 31, 2022

I would agree that there are more rabbits than normal around here (Fort Loramie). We planted a lot of milkweed plants this year, and they were quickly nibbled to the ground unless we fenced them in. I have fence on all the young trees that I planted at my pond / woods, as the rabbits will quickly strip off sections of bark.