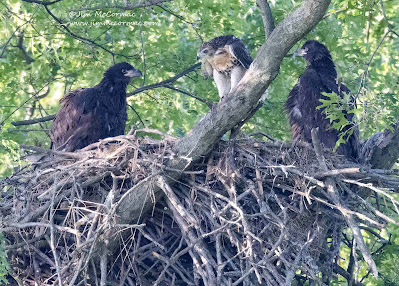 Columbus Dispatch
June 19, 2022
NATURE
Jim McCormac
These days, seeing a bald eagle nest isn’t that big a deal. It certainly was in 1979. That year, there were only four nests known in Ohio. The magnificent raptor was on its way out, largely the victim of DDT poisoning.

Dichlorodiphenyltrichloroethane (good thing for acronyms!) was a pesticide commonly used for agricultural purposes. When it made its way into the food chain, the impact was disastrous on certain bird species. In the case of the bald eagle, DDT weakened egg shells, preventing successful hatches.

Richard Nixon was inaugurated on Jan. 20, 1969, and one of his first major initiatives was addressing environmental issues. He signed the Environmental Protection Agency into existence on Dec. 2, 1970, and one of the fledging agency’s first actions was to ban DDT. That happened in the summer of 1972.

The recovery of bald eagles following the DDT ban was a slow road. By 1989, there were a dozen nests in Ohio, and by 2000 nearly 60 nests were known.

The majestic national symbol is off to the races now. The Ohio Division of Wildlife estimates there are over 800 active nests in 2022, a meteoric increase.

I’ve seen a great many eagle nests over the years, but nothing like the one that I saw on June 3. Photographer Stephanie Gaiser sent me a note about a nest not far from Dublin in which one of the chicks was decidedly not like the others. Her tale inspired me to visit immediately.

Upon arrival to the nest, the two massive eagle chicks stuck out like sore thumbs. But, wait! Right between them was a comparatively elfin red-tailed hawk chick! It looked about half the eaglets’ size, yet everyone seemed to get along. At one point, an adult eagle came in and dropped a large fish in the nest. Everyone dug into the sushi.

By the time that I visited, both eaglets and hawk were nearly fully grown and frequently tested their wings with vigorous flapping. The young red-tail even made short hovers and test flights around the capacious aerie. The differences in size was striking. A bald eagle weighs about 10 pounds, is over 2.5 feet long, and has a wingspan of eight feet or so. The red-tailed’s stats: 2.5 pounds, 1.5 feet long, and the wings span about four feet.

The million-dollar question is how did the hawk end up in an eagle aerie? One theory is that one of the adult eagles plucked the red-tailed hawk chick from its nest and brought it back for food. The hawk miraculously survived the ordeal, and the eagles were fooled into thinking it one of their own.

I put little stock in that explanation. More likely is that a pair of red-tailed hawks attempted to appropriate the eagle nest for their own use, only to have the rightful owners appear and reclaim it. By then, the female hawk had already laid an egg or eggs, which were incubated along with the eagle eggs. And voila! Strange bedfellows.

This isn’t the first known occurrence of bald eagles rearing red-tailed hawks. Two occurrences have been documented in British Columbia, and one each in Michigan and Washington State.

Bald eagle chicks are highly competitive and known to engage in fratricide — they sometimes kill each other. Which makes it all the more surprising that a hawk chick would survive. But red-tailed hawks are very feisty and this one didn’t seem to take guff from his giant siblings.

I suspect they all were hatched about the same time, probably back in mid-March. Both species’ eggs require about the same incubation period: 30-35 days. But the hawks mature far faster and are ready to depart the nest after 45 days. Eagle chicks take around three months before they fledge.

Indeed, within a week of my visit, observers reported the adult eagles acting aggressively toward their adoptee — apparently, forcing it to take wing. Raptor youth sometimes need some prodding to make their first flight.

By now, the young red-tail is out on its own and hopefully, doing well. Its formative diet probably had lots of fish, and it would be interesting to know if it tries to continue with that diet.

Naturalist Jim McCormac writes a column for The Dispatch on the first, third and fifth Sundays of the month. He also writes about nature at www.jimmccormac.blogspot.com.
at June 20, 2022

Jim, I'm with you on how the hawk got into the eagle nest. Thanks for another excellent post.

Fascinating tale and fascinating occurrence. Thank you for posting.

I am aquainted with the 2017 and 2022 BC eaglet/hawklet nest raising. I also am familiar with the 2019 occurence in Redding,CA. I am unaware of either the Michigan or Washington nests. Do you have further information?