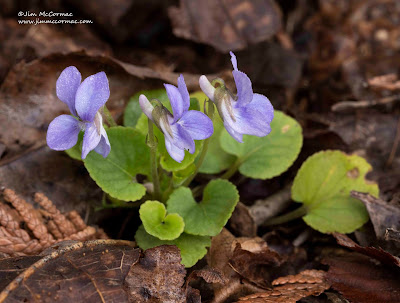 Columbus Dispatch
May 15, 2022
NATURE
Jim McCormac
Violets mean spring, at least for the botanically inclined. Chances are your yard is dotted with jots of purple. The color is courtesy of the common blue violet (Viola sororia). It’s a hardy native, capable of surviving turf grass deserts.

The common blue violet isn’t the only violet out there, although some of the others require much more searching. Give or take, there are about 26 native species in the genus Viola in Ohio. Give, mostly: Taxonomists have proposed a number of “new” species, these carved from established species. But skeptics remain and not all of the new splits have gained widespread acceptance.

Botanical simpletons might want to lump them all into three species: purple ones, white ones, and yellow ones.

On a trip to southern Ohio on April 22 (Earth Day), I encountered a booming population of one of our rarest violets. Walter’s violet (Viola walteri) is listed as state-threatened and is currently known only from Adams and Highland counties. These are the northernmost populations in its range.

Walter’s violet is also our smallest violet. The leaves are about the size of your pinky fingernail, and an entire plant could fit comfortably on a half-dollar coin. They require ground-level inspection to truly appreciate.

The scientific name Viola walteri recognizes botanist Thomas Walter, a complex and productive character. Born in Hampshire, England, in 1740, Walter came to America in the late 1760s. He settled in Charleston, South Carolina, and wasted no time making his mark.

At that time, the flora and fauna of the eastern U.S. was imperfectly known, and there was much to be found. Walter discovered a number of new plants, and eight of them were named in his honor.

In 1788, Walter published the results of his work in a book titled "Flora Caroliniana," an important milestone in early North American botany. He died the following year at age 48.

Including Walter’s violet, seven violet species are listed as imperiled by the Ohio Department of Natural Resources. Unlike the common blue violet in your yard, most violets are finicky specialists. Habitat loss is a major reason for their rarity.

Franklin County offers ideal habitat for Walter’s violet: thin soil over limestone in open woods or glades. Appropriate conditions formerly occurred along the Scioto River, especially in the Dublin area. And that’s where the only county record of Walter’s violet comes from. A specimen was collected near Hayden Falls on May 6, 1916, by botanist F.E. Leonard. This was the northernmost site ever recorded.

Large-scale changes in the intervening century have not been kind to plant conservation along the Scioto. Development and the rampant spread of invasive plants have hit native plant communities hard. The elfin Walter’s violet probably hasn’t survived the onslaught.

However, glimmers of hope often remain in the case of long-missing plants. And several other rare plants cling tenuously to Dublin’s rocky refuges. Perhaps little Walter’s violet will be rediscovered in Franklin County someday.

Naturalist Jim McCormac writes a column for The Dispatch on the first, third and fifth Sundays of the month. He also writes about nature at www.jimmccormac.blogspot.com.
at May 16, 2022