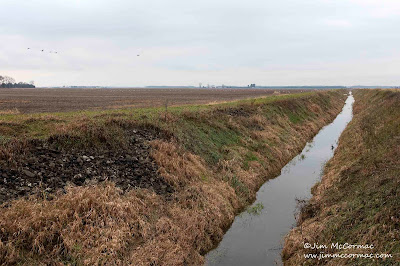 I recently spent a few days in northwestern Indiana, at and in the vicinity of Jasper-Pulaski Fish & Wildlife Area. This area is legendary for the numbers of Sandhill Cranes (Antigone canadensis) that gather here in late fall and early winter. They are southbound from northern nesting areas. During my time there in the last week of November, crane numbers were reaching their peak. About 30,000 birds were estimated to be in the area.

The photo above shows typical land use in the regions around the wildlife area. Agriculture on an epic scale, and streams transformed to deep ditches. The Kankakee River drains much of northern Indiana, including this area. At the time of European settlement, there were about a half million acres of wetlands and prairies along the river's corridor. By the early 1920's, agriculturalists had managed to drain nearly all the wetlands and destroy nearly all of the prairies and savannas. The destruction of the "Grand Marsh" is one of the greatest and saddest tales of large-scale land conversion in North America. Mountains of biodiversity was lost, and the Kankakee itself was channelized into a linear ditch over its entire length in Indiana.

But the cranes still come to this ancestral staging area. The big birds are far more resilient than, say, Greater Prairie-Chickens, which were thoroughly vanquished from the state. A hard and inescapable fact in nature is that there are always winners and losers resulting from our actions. Specialists such as prairie-chickens, Regal Fritillary butterflies, and Prairie Fringed Orchids tend to be the losers when people more or less successfully bend nature to their will. Facultative opportunistic species such as Canada Geese, Butterweed (Packera glabella) and Coyotes are winners, adapting well to massive change. And, to a degree, the cranes are winners.

The cranes spend their nights in big marshes within the wildlife area and radiate out into agricultural fields during the day. There, they feed on spilled grain and whatever morsels these omnivorous opportunists can find. In certain areas, the fields are full of cranes. At one point, I was watching and photographing a group of them when something put up thousands of birds about a mile away. The din created by all those bugling cranes was easily audible from my position, and they created a semblance of low scudding clouds on the horizon. 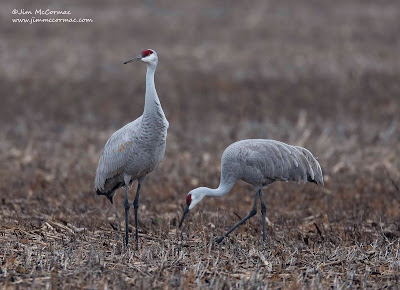 A pair of Sandhill Cranes picks through the stubble. It would be interesting to know how old they are, and how long they have been paired. The oldest known wild Sandhill Crane (from a western population) was forty (40!) years old. Sadly, we know that because it was shot by a hunter. An ignominious ending for such a regal elder. But as the bird was banded, we did glean something of value from the unfortunate episode.
Cranes are thought to often mate for life, and one way in which they reinforce bonds is by "dancing". If you visit Jasper-Pulaski at peak crane season, you will see this behavior. To me, it is one of the most interesting things about crane-watching. Much of the dancing occurs beyond the range of my lens, and I just enjoy it through binoculars. Sometimes, a pair's dancing sparks more dancing by other birds, and before you know it it's like a feathered flash mob erupts, dancing to some primal beat. 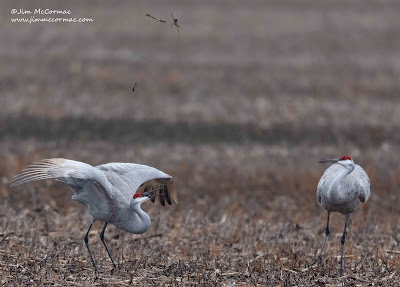 I had a feeling the pair featured here was going to do something, and they were close enough that I could work my camera. Sure enough, the dance soon commenced. The bird on the left has tossed plant debris aloft - you can see it in the air over its head. Object tossing typically accompanies these displays. We can assume the other bird is impressed. 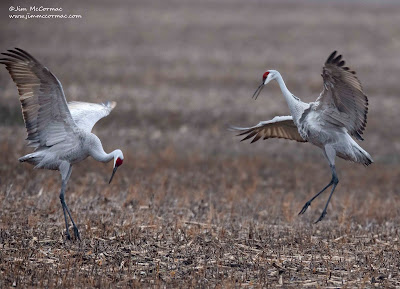 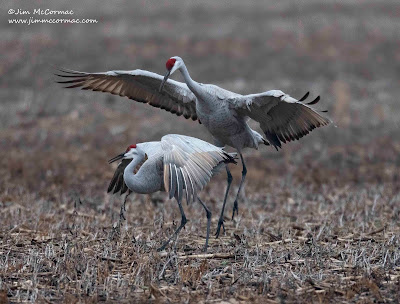 This synchronized, energetic bird ballet is impressive. It'll usually last for a minute or few, then it's back to gleaning seeds from the stubble as if nothing happened.
If you've not been to Jasper-Pulaski, I highly recommend a visit. The incredible Kankakee Sands prairie restoration is less than an hour west and should be included on the itinerary. I'll write more about Kankakee later.
at December 02, 2021