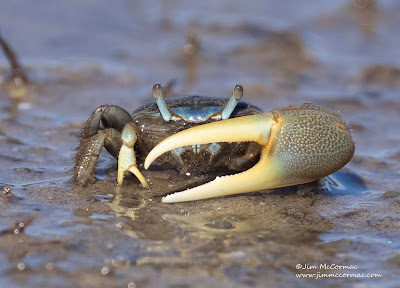 A male Mud Fiddler Crab, Minuca pugnax, on a saturated tidal mudflat. Males have outrageously asymmetrical chelipeds (claws), and are beautifully tinted with turquoise-blue between the eyes, and on the eye stalks.

On my recent foray to southern New Jersey and the Cape May area, I made a stop at the Wetlands Institute. This is an amazing place that does lots of important research and conservation work, and I highly recommend a visit if you're in the area. I'll write more about that place later.

The main trail at the Wetlands Institute - which is VERY birdy - passes by a rich mudflat, and I happened to be there at low tide. Dozens and dozens of these interesting crabs were swarming the mire, and I had to spend some time observing them. 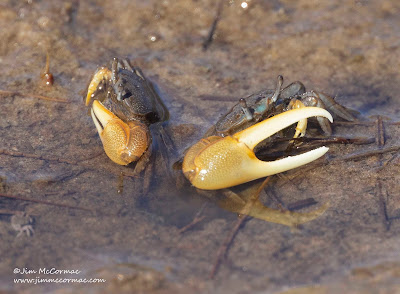 A pair of Mud Fiddler Crabs lounge at the entrance to a burrow. That's definitely a male on the right. I presume the other is a female. They are smaller, lack the blue on the carapace, and their chelipeds are not so disproportionate in size. Also, they are hanging out together. I saw males come into contact with one another (next photo) and battles commenced immediately.
These burrows are covered during high tides, and the crabs apparently mostly stay in them at such times. Or at least we can't see them if they're foraging under the water. I stopped here the next day, mostly to shoot birds, and the tide was up. The flats were submerged and I only saw a few crabs along the margins - nothing like the number of animals at low tide the previous day. 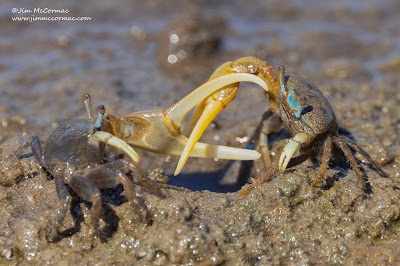 I saw a few hostile encounters between males, apparently triggered when one would encroach upon another's burrow. Apparently the main purpose of the outsized claw is as an attractant to females. The amorous male waves it around like a semaphore, and presumably the bigger the cheliped the more attractive he is.  But the massive claw clearly has another purpose - to spar with other males. These two mixed it up for maybe a minute, and the interloper was driven off. Crustacean-elk, if you will.
Later I'll share photos of ghost crabs, which are also amazing creatures that took me away from the birds for a while.
at October 11, 2021

I am so glad we were able to turn you on the the Wetlands Institute, especially because we did not have the same fiddler crab display that you had. Now I can't wait to go back. I found the employees there (many of whom I believe are grad students doing internships) are very approachable and willing to share their vast knowledge.

Were you able to see the resident Little Blue Heron while you were there? Or any of the stunning boat-tailed grackles? They gave us quite a show, but, unlike you, my memories are all up in my head. I love that you share your dedication to wildlife with the rest of the world.