Nature: A white-tailed kite spotted in Harrison County is a true rarity 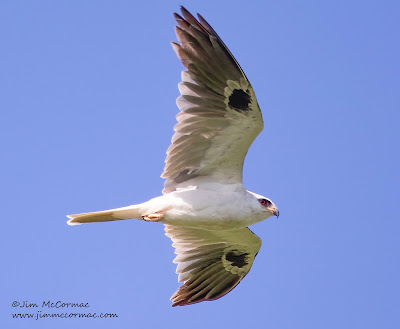 Nature: A white-tailed kite spotted in Harrison County is a true rarity

Columbus Dispatch
June 20, 2021
NATURE
Jim McCormac
Nothing excites a birder like a rarity. And, although one should probably take the high ground and view all rare birds with equality, that’s not always the case. Many people will get more excited over a sensational raptor than, say, an unusual sparrow.

The raretè du jour in Ohio is a white-tailed kite. This is a superb bird of prey by any reckoning, and the appearance of this species in rural Harrison County is the talk of the birding community. Well, there is a rival but I’ll write about that species in another column.

Ohio’s current white-tailed kite is not the first state record. It is the second. Although they may be the same bird.

On May 23 of last year, Ian Ruppenthal was birding Woodbury Wildlife Area in Coshocton County when he spotted a white-tailed kite perched high on a snag. He obtained diagnostic photos, and Ohio’s first record of this western and southern species was in the books. Alas, the bird flew the coop and could not be relocated.

On May 31 of this year, Mary Grey and Larry Helgerman were birding grassy reclaimed strip-mine lands in Harrison County, six miles south of Cadiz. The locale is 50 miles due east of Ruppenthal’s 2020 kite sighting. And lo and behold, they spotted a white-tailed kite. My feeling is the same bird accounts for both of these records. Vagrant birds sometimes return annually to the same region, far removed as it may be from their normal haunts.

White-tailed kites normally occur in Pacific coastal states south through Mexico and Central America, and in broad swaths of South America. There is a tiny population in southern Florida. Records of vagrants in the Midwest are few and far between, making the “chaseable” Harrison County kite of great interest.

This time the bird stuck, and within a few days probably hundreds of people made the journey. Along with Dr. Bernard Master, I made the trip on June 4. Upon arrival, it took us all of a few minutes to spot the bird. White-tailed kites are not shrinking violets, and it was sitting atop a low snag in an otherwise open grassland.

Eventually, the kite took to the air and treated us to its legendary aerial prowess. It patrolled the vast grasslands, wafting gracefully about as it searched for potential prey. Occasionally it would stop and hover like a helicopter, as if tethered to a string.

A white-tailed kite has a wingspan of nearly 3½ feet, is about 16 inches in length, but weighs only 12 ounces — the same as a can of soup. The ratio of low weight to large wings and tail makes the animal a superb flying machine and woe to the prey that is pierced by the kite’s ruby-red eyes.

While other kite species often prey heavily on large insects such as cicadas and dragonflies, the white-tailed kite sticks mostly to meat. Small mammals such as mice and voles normally make up the bulk of the diet.

At one point, the kite flew nearly overhead, as if curious about me. That not only enabled me to get the accompanying photo, but to admire its elegant features from a front-row seat. White-tailed kites are mostly pearl-gray and white, with prominent black shoulders, the latter especially visible on perched birds.

The kite cut a dashing figure, even more so than Harrison County’s most famous son, Clark Gable. Gable was born in the county seat, Cadiz, in 1901. For the time being, at least locally, the kite probably eclipses Rhett Butler of "Gone With the Wind" fame as Harrison County’s biggest celebrity.

It will be interesting to see how long the kite remains (it’s there as of this writing, on June 9), and if a white-tailed kite rematerializes in this area in 2022.

Naturalist Jim McCormac writes a column for The Dispatch on the first, third and fifth Sundays of the month. He also writes about nature at www.jimmccormac.blogspot.com.
at June 21, 2021