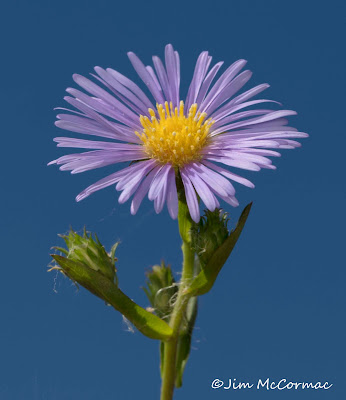 Looking stunning against the pure blue sky of a fall Ohio day is this purple swamp aster, Symphyotrichum puniceum. There are over 35 native aster species in the state, and they all make for great photo subjects.

I led a macrophotography workshop at Dawes Arboretum last Saturday, September 14. The 15 spots filled quickly, and we had a great time exploring the grounds of this state treasure. Following a presentation about various macrophotography techniques in Dawes' "Red Barn", all we had to do was step outside the building to immerse ourselves in a macro wonderland. All of the subjects shared here were taken within sight of the barn.

If you've not been to Dawes Arboretum, I'd recommend a visit. The grounds encompass about 2,000 acres, and about half of the property contains more formal plantings and gardens, while the remainder is natural landscapes. The place is a gold mine for photographers, and I believe we will repeat this workshop next fall. 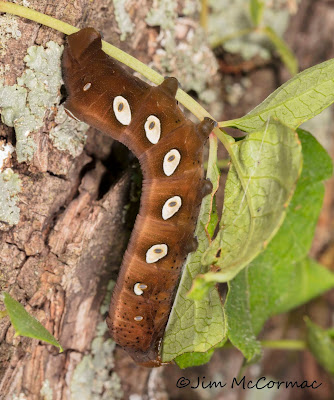 A bit of nocturnal scouting the night before yielded some excellent larvae, such as this Pandorus sphinx moth caterpillar, Eumorpha pandorus. As is often the case, the boldly spotted cat was found on straggly Virginia creeper plants at the base of a tree. I temporarily detained this cat and a Luna moth caterpillar, and shared the tubular livestock with everyone on Saturday. Many images were made, and the cats were later released where they were found. 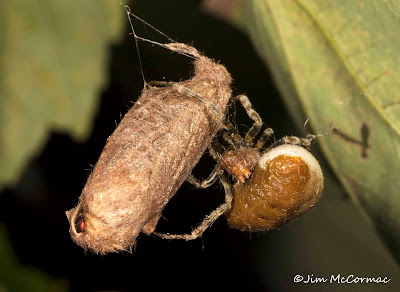 OMG! This is a Holy Grail of spiders and only the second one that I've seen. It is a toad-like bolas spider, Mastophora phrynosoma, and we found this one low in the boughs of a sugar maple. There was an enormous hatch of bronzed cutworm moths, and they were resting on tree foliage everywhere. I think that's what the victim here is. Bolas spiders are incredible, producing pseudo-pheromones to lure male moths into their sphere. Gullible moths are then snared and reeled in with the equivalent of an arachnid fishing line. You can see more photos and read about these amazing spiders RIGHT HERE. Unfortunately, I could not capture this one for the group to see/photograph the following day. To do so would have messed up her operation, and besides to really see the magic of a bolas spider, one must see them on their terms after nightfall, when they are hunting. 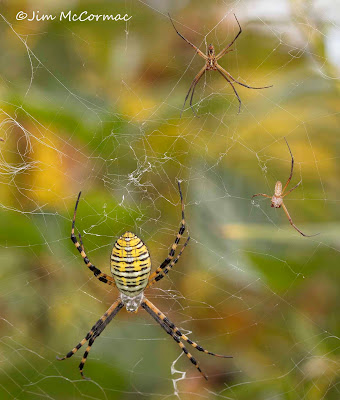 Everyone could and did see and image this spider, one of many of its kind that we saw. It's a banded garden spider, Argiope trifasciata,  and this was a particularly compelling composition for us. The huge female lays in wait in her web, while two males attend her, at a safe distance. The disparity in size between the sexes is stunning. The males' comparative puniness makes mating a risky business. If he makes a misstep, she's liable to seize, kill, and eat him. I don't know what happened to the male at right center. He's missing four legs, but is still hanging in there.

Everyone was pleased to see and photograph this golden tortoise beetle, Charidotella sexpunctata. A specialist of plants in the morning-glory family, the "gold bug" is an amazing creature. When stimulated, it can change color by forcing liquid through tiny grooves in its opaque shell. Beetles will shift to reddish or orange hues, often while mating. As a point of trivia, the longest recorded copulation in this species was 583 minutes. 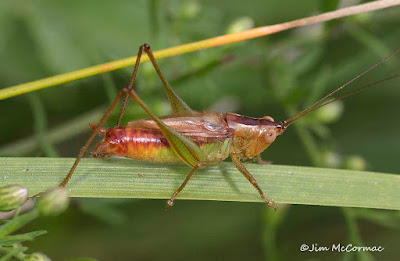 A showy little short-winged meadow katydid, Conocephalus brevipennis, patrols the flora like a six-legged wandering minstrel. This is a male, and he sings with his wings, rubbing them together to create a song that attracts females. Meadow katydids are near their peak right now, and their sputtering trills are a big part of the insect soundscape. 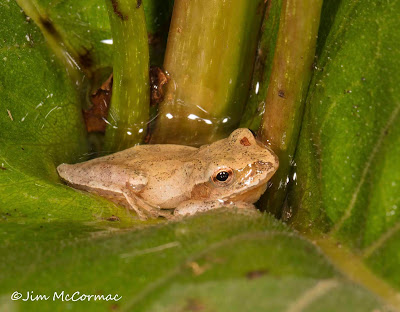 I have long wanted this shot, and got it during the workshop. A spring peeper, Pseudacris crucifer, basks in a pool created by the fused leaves of cup plant, Silphium perfoliatum. The basket-like basal portions of the plant's lower leaves hold water, and I figured someday I'll find a frog in one of these. Well, that didn't happen at the workshop, so we placed this peeper - which Becky Donaldson found nearby - into the cup plant. The frog seemed happy in his moist environment on this hot day, and so were my fellow photographers. It was a great way to conclude the workshop.

My thanks to Greg Payton of Dawes Arboretum for conceiving this workshop, and inviting me to participate. Also to Becky Donaldson, the naturalist at Mentor Marsh (see this RECENT ARTICLE) who was hugely helpful in finding subjects and sharing her vast knowledge of critters great and small.


Your workshop was great -- informative and fun. Learned a lot. Thanks so much for the tips and the creatures.
Rkovacs

Thank you, and thanks for going, Rosie!

Honored to have you Jim and, yes, you can do this anytime! -Greg Payton