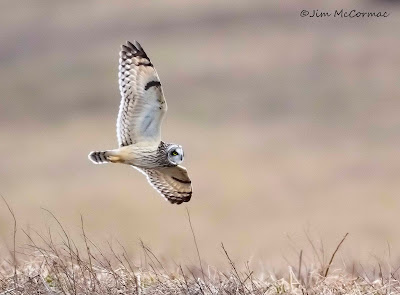 A short-eared owl courses low over grasslands in a reclaimed stripmine in eastern Ohio. It and three comrades were mousing, or perhaps more accurately, "vole'ing".

The short-eared owl is one of my favorite birds. Everything about them is cool. Their looks, behavior, and even the vocalizations. Last Monday I ventured to some "reclaimed" strip-mine grasslands in eastern Ohio that have been hosting a handful of these open country owls. Whenever opportunity allows, I'll go out of my way to commune with short-ears, and I got to do a lot of that on this day.

Quite often, short-ear owls don't take wing until dusk, and often so late that it's nearly dark. On such days, the viewing window is short, and what there is, is dim and shadowed. Not this day. The owls emerged around 5 pm and alternately rested on fence posts or the ground, or actively hunted, giving me a few hours of daylight to observe them.

I have noticed that short-ears seem antisocial and irascible, but this churlishness adds to their charm. If two owls come near one another, a spat is likely to erupt. Ditto for any northern harrier that ventures by, and these two raptors are frequently hunting companions in the same meadows. When an agonistic interaction occurs, the owls will rapidly fly at one another like giant enraged moths, barking like terrier dogs. Sometimes you'll hear the strident yips before spotting the dueling birds. 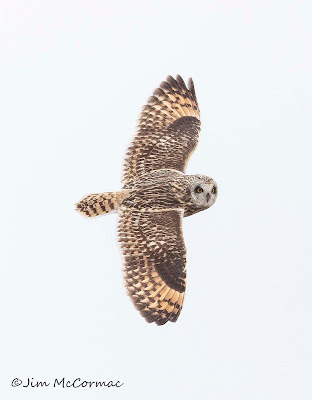 One perk of being in the presence of short-eared owls is having the opportunity to photograph them. Making good shots is often not easy, in large part because of poor light at or near dusk. The light in this situation was okay. By the time the owls commenced flying, the blue skies of earlier had clouded over to the all too common white skies found in Ohio. While I used to hate white skies as a backdrop for birds, I've come to rethink that stance. Sometimes raptors, cranes, waterfowl and other species can be portrayed quite pleasingly against such backdrops.

At times, short-eared owls will soar and circle high in the air, and that's what the animal in the image above was doing. I was tracking him with my tripod-mounted telephoto as he came ever closer. There's a tip for shooting flying birds: pick up and lock focus on your subject as far out as possible - even when it's still out of range - and grab the subject using AI servo tracking mode, then when the quarry comes into range (if it does), start firing away.

Some amount of positive exposure compensation is required for birds against a pale backdrop, and that's what I did here. The latter shot was made with the tripod-mounted (Gitzo, with Wimberly head) Canon 5DSR and Canon 800mm f/5.6 lens. The camera was in manual mode, wide-open at f/5.6, and 1/1250 shutter speed. ISO was 1000, and in Auto ISO mode. Manual Mode and Auto ISO are by far my favorite bird settings. I want to be able to alter both shutter speed and aperture instantly, but do not want to worry about manually manipulating the ISO. As the latter is always displayed in my view finder, I can quickly rein it in if need be by opening the aperture and/or slowing the shutter speed. In the case of this shot, I didn't want to go any lower than 1/1250 because I know from experience that if I dip below that my percentage of sharp shots of flying birds will suffer. I had nowhere to go on the aperture, as f/5.6 is wide open on that lens. So, given the less than optimal light I had to settle for ISO 1000 - a bit over what I prefer but not too bad.

So glad you found them! We really enjoyed your talk to the Brooks Bird Club.