Nature: Bunnies prolific breeders but have many predators 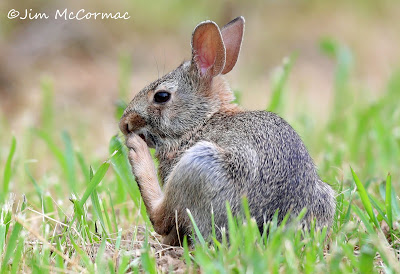 A young eastern cottontail grooms itself along a Hocking County lane. Many cottontails fall victim to predators before they reach adulthood. Jim McCormac/For The Dispatch


“Hallo, Rabbit,” he said, “is that you?”
“Let’s pretend it isn’t,” said Rabbit, “and see what happens.”
― A. A. Milne (from “Winnie-the-Pooh”)
I’ve been writing natural-history columns for The Dispatch for 12 years and have penned more than 250 articles.
In all that time, I haven’t written a word about one of our most familiar mammals, the eastern cottontail. My apologies to the rabbits.
There’s certainly enough of the fuzz-tailed hoppers to warrant some comment. Cottontails are prolific breeders, with females able to produce five or more litters of up to eight kits in a single season.
Some of those kits will produce litters in their first year.
It doesn’t take a mathematician to realize that we could quickly be swarming with rabbits.
But we’re not awash in rabbits, thanks to numerous predators that view them as hopping steaks. Larger hawks, owls, coyotes and foxes make meals of them. Snakes, skunks, weasels and others nosh on nestling rabbits.
A notable rabbit-hunter is the bobcat. I’ve only seen two of these wildcats in Ohio, and both were patrolling rural lanes in June. I suspect they were seeking young rabbits, which are prone to conspicuously foraging in mowed berms in early summer.
The predators must work for their meal, though. A startled cottontail bolts off in a series of rapid zigs and zags, and can briefly touch 18 mph.
If a cottontail makes it out of adolescence, it will be lucky to last three years.
Few people have actually seen cottontail courtship, which is sometimes called “cavorting.” A pair of amorous rabbits face off, a few feet apart. The male will suddenly spring several feet into the air, twisting 180 degrees in the process. The female races beneath the airborne acrobat, and he lands facing her. Cavorting may entail all manner of other rabbit hijinks: chasing, hopping and tussling.
There once was another rabbit species in Ohio. The larger snowshoe hare occurred in extreme northeastern Ohio, in the snowbelt region. This northern rabbit was at its southern limits in Ohio, and changing habitats pushed it out of the state by the early 1900s. A reintroduction scheme initiated by the Ohio Division of Wildlife in the early 2000s failed.
Ohio hunters must settle for the eastern cottontail, and many do. Rabbit hunting is popular, and the bag limit is four rabbits a day. In recent years, the annual harvest is probably about 500,000 animals. Harvests of four decades ago averaged about 2 million rabbits.
A decrease in hunters and an overall decrease in the cottontail population — driven by habitat loss and an increase in certain predators such as coyotes — have combined to cut those annual takes.
Cottontails remain common, though, as many a gardener who has waged war with the furry vegetable-eaters can attest.
Naturalist Jim McCormac writes a column for The Dispatch on the first, third and fifth Sundays of the month. He also writes about nature at www.jimmccormac.blogspot.com.