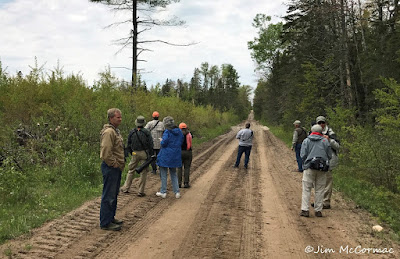 This year marked the 8th year that I've led natural history forays in one of the great hidden gems of eastern North America, Presque Isle County, Michigan. I work in partnership with NettieBay Lodge, and there couldn't be a finer base camp. The lodge and its cabins sit on the shore of a beautiful natural lake. The wild yodels of Common Loons are commonplace, Eastern Whip-poor-wills sing from the forest, an American Woodcock displays nightly in the front yard, and scores of other birds are on the property.

But we range throughout the county and beyond on our day trips. Above, this year's group patrols a remote road in the Pigeon River State Forest. There were Mourning Warblers, Northern Waterthrushes, Red-breasted Nuthatches, Ruffed Grouse, and more at this locale. In sum, the group's total bird list for our 3+ days was 142 species, and if my other observations from pre and post excursions is included, the number soars to over 150 species.

If you're interested in coming along next year, drop me a line. We're doing two groups, each of two full days, with a half-day on either end. I think the first one is full, but there are a few spots for the second group. We'll sort the exact dates out soon, but it'll be sometime in the 3rd and 4th week of May. 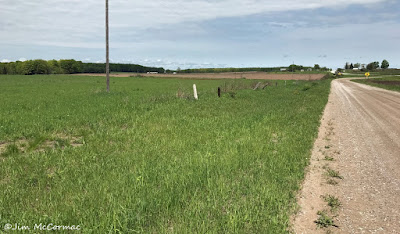 We usually stop at this big meadow, which always hosts a complement of grassland birds, and this year was no exception. 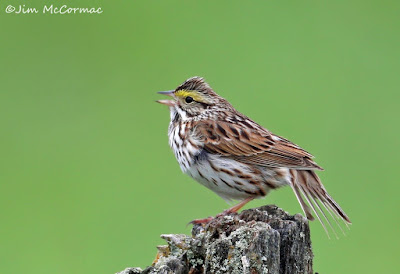 Savannah Sparrows can always be found singing from the fence posts along the gravel lane in the previous photo, and this is one of those birds. 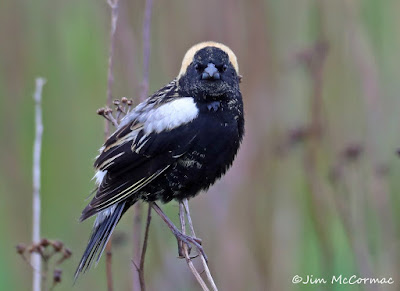 The highlight of Big Meadow, though, is the Bobolinks. The males put on quite a show, chasing females about and singing their twangy R2-D2 songs. Although Bobolinks occur in many of the pastures up there, this is a particular good spot to view them. 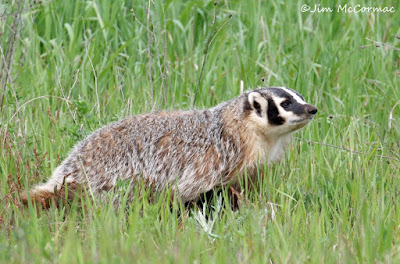 Whoa! An American Badger! While we watched the Bobolinks' antics over the meadow, sharp-eyed Carl Winstead suddenly exclaimed something to the effect of "Is that a badger?!" Yes, indeed it was, and here's the beast. It was snuffling about near the entrance to its burrow along the fenceline buffering the meadow, and close enough to offer stellar looks. We even had him in the scopes for extended views. 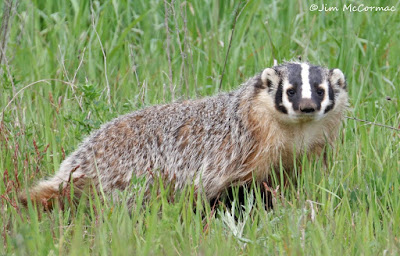 Badgers apparently don't see so well, and rely heavily upon scent to interpret their surroundings. We were upwind, which helped a lot, and I don't think the beast even knew we were there, or if it did, it didn't care. Finally, I crept stealthily in its direction, and it eventually detected me and paused to stare my way. After a bit, it slunk back into its burrow, after offering up the best looks one could ever ask for of one of these hard to observe animals.

Two years ago, Sandy Brown spotted a badger from the van on one of our trips. That was the first one I'd ever seen, and I told the story RIGHT HERE. Badgers are quite common in Presque Isle County and vicinity, as evidenced by their numerous burrows. But seeing one requires a fair bit of luck. I'm not sure that they are particularly concerned about people, but the animals spend much of their day holed up in dens, and apparently forage mostly by night. 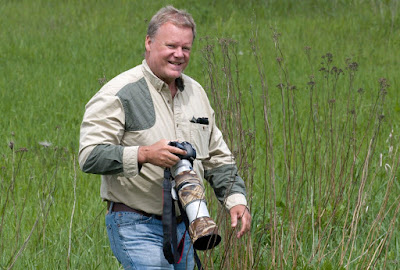 Your narrator was quite pleased with the badger sighting, as was the rest of the group. Carl was man of the hour for making the initial spot. To me, this even trumped the singing Connecticut Warbler that we found first thing that morning.

In the case of the badger of two years ago, I got no photos. That's because I didn't bring a camera. It was raining hard when we set out that morning, and the forecast called for lots of precipitation. I didn't want to take the rig out in the rain, and left it behind. Dumb, and a stupid mistake I'll not make again. I could have just left the camera in the van in case of emergency.

For photographers, the rig I'm holding is one of the greatest setups for handheld field work, in my opinion. It is the Canon 5DS-R (more often I'll use the 5D IV) attached to Canon's fantastic 100-400mm II lens. In this case, I had the 1.4x extender attached, and was glad that I did. That makes the lens at full zoom a 560mm, which was plenty of reach to pull in the badger, and it's easy to handhold. Pop the extender off, and the 100mm low end offers the ability to do tight landscapes, people or groups, etc., and the lens focuses to 3.5 feet. Lots of versatility here. If I could only carry one rig, this would be it.

Wow! Awesome post. We have to love nature. You take some wonderful pictures.