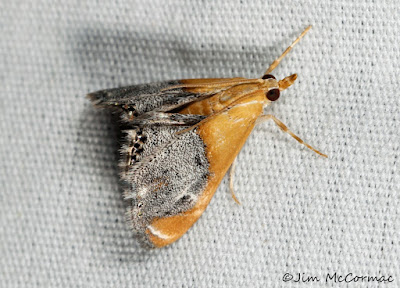 One August evening last summer, I was in Adams County in southern Ohio shining specialized lights on white sheets with some expert lepidopterists.

We were trapping moths deep in the midst of the Nature Conservancy's Edge of Appalachia Nature Preserve, which encompasses 20,000 acres. "The Edge" harbors some of the richest biodiversity in the Midwest.

Like a moth to a flame, the insects flocked to our sheet. We could survey what was present without needing to kill or collect the specimens.

At one point, a moth unknown to me fluttered in. It was gorgeous: tawny-buff in color, with large patches of peppered black and white. Gemlike dots trimmed the trailing edge of the hind wings.

Someone mentioned that it is a parasite that kills paper wasps.

Nearly everyone knows paper wasps, in the genus Polistes. They construct many-chambered, papery nests that hang from slender stems under the eaves of buildings and other structures. The adult wasps fiercely protect their nests and a female's sting packs a punch.

Soon after my initiation to this bizarre moth, an acquaintance showed me a photo of a moth that mystified her. It turned out to be a sooty-winged chalcoela, resting on the side of her house only inches from an active paper-wasp nest.

Figuring that the moth had raided the wasp's lair, we hatched plans to inspect the nest once winter set in and the wasps were gone. On the frosty night of Dec. 23, we removed the wasp nest from the eaves and took it inside for inspection.

It didn't take long to find the tiny moth caterpillars. The nest was infested with a dozen or more.

Each of the cells within a paper wasp nest contains a wasp larva, or grub. The female chalcoela moth flies to the nest under cover of darkness, when the wasps are inactive, and lays eggs on the structure. Caterpillars soon hatch, invade the cells and consume the wasp grubs.

By the onset of winter, the caterpillars are ensconced within dense silken cocoons woven within the cells, or on the back of the wasp nest. Come summer, the adult moths will emerge and begin the cycle anew. As adult paper wasps often hunt and feed on moth caterpillars, this is a particularly apropos form of revenge. 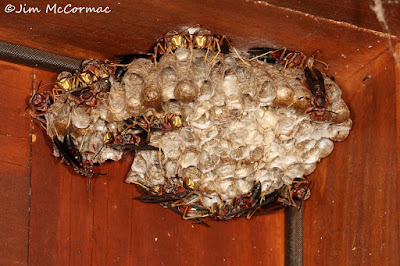 An active paper wasp nest, fiercely guarded by its inhabitants. This is the actual nest that was parasitized by the moth in the accompanying images. 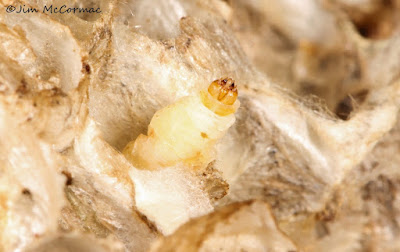 A sooty-winged chalcoela caterpillar peeks from a cell in the wasp nest. 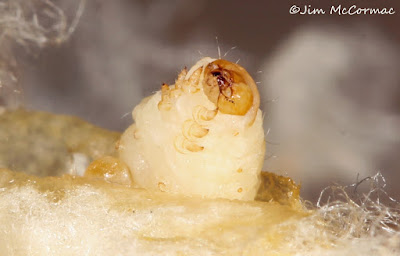 A closer view of the caterpillar. This is its head, and the foremost three pairs of legs (thoracic prolegs) 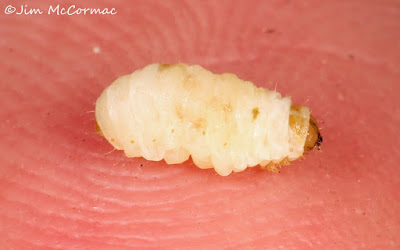 A caterpillar, removed for inspection. It is the spitting image of the wasp grubs that it consumes; maybe visual trickery plays a role in protecting it from wasps.
at February 19, 2017

This is fascinating. How common (or uncommon) are these moths? Thank you for sharing this post!

Thanks! Don't know, but I'd guess not very common, since no one I know seems to hardly ever see them.

Loving this. I think you've just solved a mystery I've been working on for awhile. See juliezickefoose/blogspot.com/2017/09/little-bat-lost.html for a post about parasites in Polistes nests, among other sad and happy things.