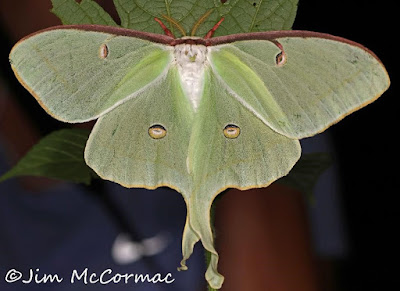 NOTE: Sometimes people ask me why I pick certain headlines for my columns. The answer: I don't. Editors craft newspaper headlines, not the reporters and writers.

One of Ohio’s stranger natural-history events had its origins in a ditch in Adams County. In July 2012, John Howard, Dave Wagner and I were in said ditch, marveling at some extraordinary moth. (I’ve forgotten the species.)

Howard is a technician for General Electric and naturalist extraordinaire. Wagner is a professor at the University of Connecticut and author of the "Caterpillars of Eastern North America" (Princeton, $29.95). We had been conducting field work in this Ohio River county.

When we found the moth, it triggered a discussion about the fabulous diversity of these winged creatures. If we could expose more people to the wonders of moths, we reasoned, more people would become enamored with natural history.

A call to Mary Ann Barnett, a natural-history enthusiast and organizer extraordinaire, bore fruit. She was instrumental in shaping the conference.

By early 2013, our moth-centric conference was ready and slated for a June weekend. We hoped to attract perhaps 30 to 40 diehards. In all, about 150 attended the inaugural event, far exceeding expectations.

That first conference was based at the Lodge at Shawnee State Park, smack in the midst of biodiversity-rich Scioto and Adams counties. The following year we moved to Burr Oak State Park in Morgan County, and the third and fourth conferences have been back at Shawnee.

The most recent Mothapalooza took place the first weekend of August, with another full house. Some of the region’s premier moth experts shared their knowledge with participants, and generous sponsors, in particular the Ohio Department of Natural Resources' Division of Wildlife, provide critical support.

Although Mothapalooza features wonderful speakers, vendors, artists and others, field trips to see moths are the core of the conference. Nocturnal excursions on Friday and Saturday nights departed at 9:45 pm, and some attendees didn't return to the lodge until 3:00 am. We have to keep moths’ hours.

Moth stations are situated in the wild lands of Shawnee State Forest and adjacent Edge of Appalachia Preserve. A station consists of hung sheets illuminated by specialized lights. They’re irresistible to moths, which fly to the sheets for easy observation.

Perhaps 1,500 moth species occur in this region, and their diversity is dazzling. Species range from bat-sized imperial moths to micro moths scarcely visible to the unaided eye. The collective cast is painted in a rainbow of other colors.

Two major factors have spiked interest in moths. In 2012, the "Peterson Field Guide to Moths of Northeastern North America" was released, exposing a huge new audience to the magic of moths.

The meteoric growth and increased accessibility of digital cameras is the other factor. Moths are fabulous subjects, and relatively easy to photograph. Many images from Mothapalooza 2016 can be found at my blog.

Naturalist Jim McCormac writes a column for The Dispatch on the first, third and fifth Sundays of the month. He also writes about nature at www.jimmccormac.blogspot.com .