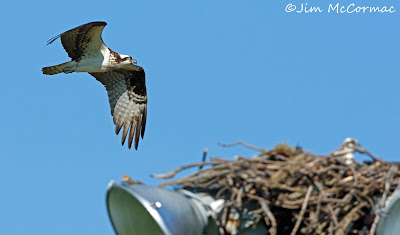 An Osprey wheels protectively over its nest, while the female is on the nest, incubating a clutch of eggs.

While on a whirlwind birding tour of central Ohio on April 16, Bernie Master and I stopped by Scioto Audubon Metro Park just south of downtown Columbus. We spent a few minutes admiring the Ospreys, which are nesting atop a light pole, just as conspicuous as could be. While making photos of the birds, I noticed something odd and unusual - House Sparrows were apparently nesting within the Osprey nest!

I resolved to return when time was more plentiful and document this excellent case of commensalism (relationship between two organisms, where one benefits and the other is unaffected). That day was last Saturday, in the perfect light of late afternoon. 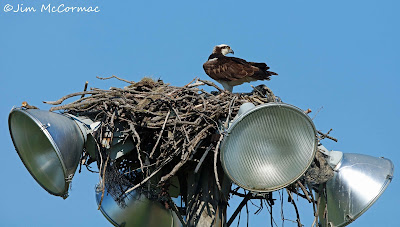 An Osprey glares around from atop its aerie. The birds are quite protective. At one point, a Red-tailed Hawk flew past, and both birds rose to warn it off. But they are quite unconcerned with people. This is a high-use park and many people are everywhere, often quite near the nest. It doesn't seem to bother the "fish hawks".

If you are looking for a great place to practice in-flight photography on an easy, relatively slow moving subject, this is your chance. Plus, Ospreys are just cool to watch. 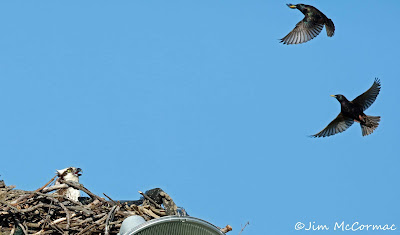 These European Starlings invoked a stern rebuke from the incubating Osprey. I saw this happen several times. A small flock of starlings would sail in towards the nest, no doubt thinking it a good roosting spot. As they dropped in, they'd spot the Osprey at the last instant, which would scold them with piping whistles and send the invaders packing. 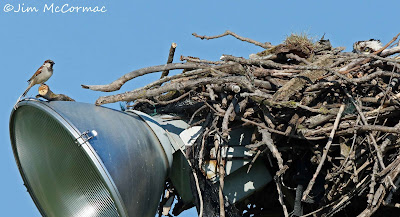 Icy stares and stern rebukes have done nothing to dissuade plucky House Sparrows from thoroughly taking advantage of this Osprey nest. A male sparrow perches atop one of the lights, no doubt pleased with his cleverness and utterly unconcerned by the massive bird of prey glaring at him from a few feet away (look carefully at top right of nest). 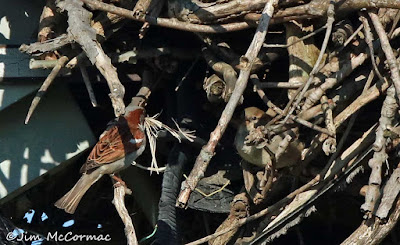 The male sparrow brings in a load of dried vegetation to add to the nest. His mate can be seen to the right, hiding amongst the sticks. This is the entrance portal, on the west side of the Osprey nest. The sparrows would disappear completely into the bulky stick nest, and I suspect their nest is deep within the structure, likely only inches below the floor where the Osprey's eggs - and chicks to be - are located. While the Ospreys are totally aware of these interlopers, and probably less than pleased about the unwanted arrangement, there's nothing that they can do about it. 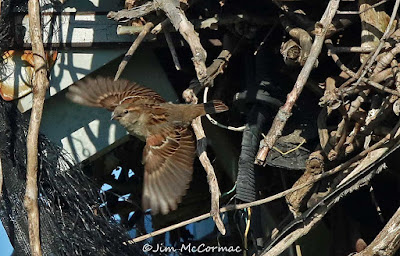 The female House Sparrow darts from the nest, having been spelled by the male. Judging from their behavior, I'd say the sparrows are incubating eggs, just like their much larger hosts. Say what you will about House Sparrows, but they are good parents. Males take on much of the nesting duties, including nest construction, incubation of eggs, and feeding of chicks.

While House Sparrows have been recorded nesting within large raptor stick nests before - even Bald Eagles! - it is still cool to see firsthand. And thoroughly document with photos. 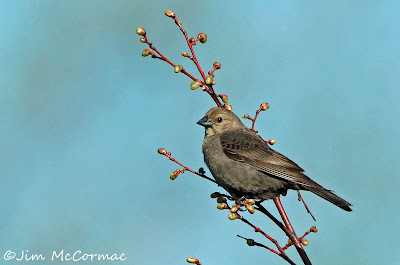 Several times, a female Brown-headed Cowbird (or likely the same one) perched for an extended period in a small tree very near the Osprey nest. I have little doubt that she was keeping tabs on the House Sparrow activity. Cowbirds, as you likely know, are nest parasites - the female lays an egg in a host species' nest, leaving the unwitting parents to feed and raise the cowbird chick. Cowbirds are known to parasitize House Sparrow nests, too.

I really was wishing that she'd gotten her opening and darted up and into the sparrow nest. I'd have loved to have made photos of that! But House Sparrows are quite protective of their nests and the cowbird never got an opening, at least while I was there.

so cool Rick from south Licking

Monk Parakeets and House Sparrows are fairly common breeders in the bottom of active Osprey nests in Florida.

I live on the Eastern shore of the Chesapeake Bay and have seen sparrows in osprey nests, in fact, it seems quite common.