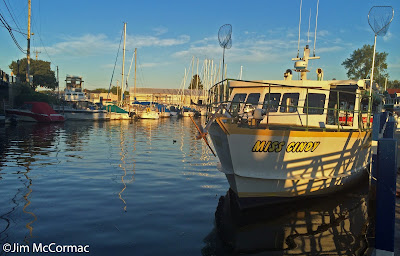 Last Wednesday, I and about 27 other birders boarded the Miss Cindy in Vermilion, Ohio, and headed out on Lake Erie. This was one of Jen Brumfield's freshwater "pelagics", and she and crew have drummed up amazing stuff in trip's past. This day, alas, we were treated to weather much too fine for good lake birding: high in the 80's, little wind, and calm conditions for the prior few days. One highs for cool blustery weather, just rough enough that the boat will still go out.

But in spite of that, it was a fantastic trip and I encourage you to try one of these. Jen's pelagics fill fast, and I'm not sure there will be any more opportunities with her this year. However, Black Swamp Bird Observatory has two trips this year; details RIGHT HERE. Sign up for one of them now!

In spite of the calm weather, we saw lots of interesting things. A Red-necked Phalarope, spotted by the inimitable Jerry Talkington, was a great find. So was a first of season Horned Grebe. Good looks at Common and Forster's terns. And lots of Monarchs - yes, Monarch butterflies! It was amazing to see the hardy insects making the open water crossing from Canada. In all, we sailed 67 miles and made it 12-14 miles out from shore. Monarchs, steadfastly winging south, were seen just about everywhere. 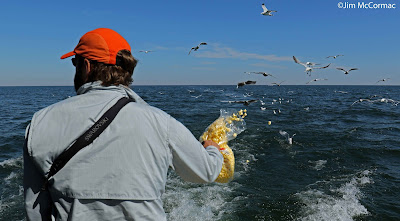 Chum-master Ben Warner flings popcorn. He also spewed a lot of oily fish parts overboard. This practice is known as "chumming", and the edible detritus keeps a constant cloud of gulls swirling in the boat's wake. Sometimes rarer gulls come in to investigate, and even birds that shun chum, such as terns, will fly near to see what the hubbub is about. If any jaeger is anywhere near, there's a darn good chance that it will shoot over to add to the ruckus. 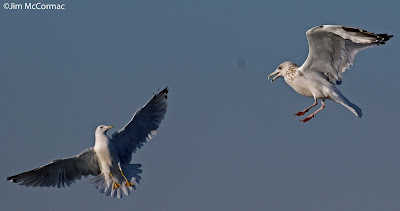 While no rare gulls or jaegers materialized this day, the parade of Ring-billed and Herring gulls made for great photo ops. Here, one of each species mixes it up. The former on the left, the latter on the right. 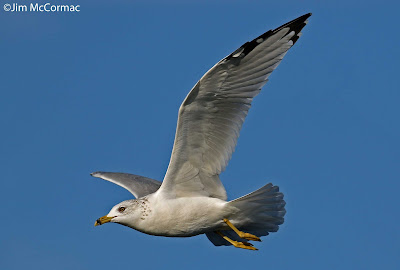 A sleek adult Ring-billed Gulls cruises by. I had a fantastic time shooting images of gulls in flight. Photographing flying birds (well, at least) is not the easiest thing to do. But gulls are relative child's play compared to many species. Nonetheless, good equipment used properly makes a huge difference.

I was shooting my Canon 7D Mark II, coupled to Canon's 100-400mm f/4.5-5.6 II lens. This is an awesome setup for bird photography, especially for handheld shots of flying birds from a moving boat. 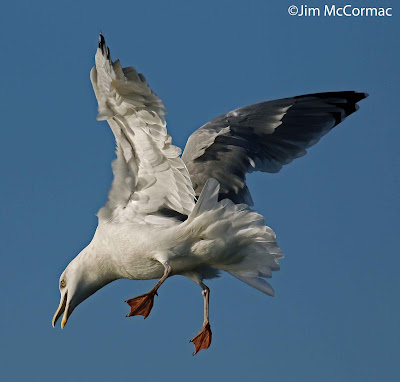 An adult Herring Gull tumble-dives towards the chum, while letting his comrades know he's coming. For most of these shots, the camera was set to 1/4000 of a second to thoroughly freeze action. I used auto ISO, as it was a bright day and high ISO's (and their attendant graininess) would not be a problem. Most of my images emerged at ISO 200 to 250. F-stops ranged from f/5 to f/6.3. The 100-400 zooms very smoothly, and I shot these photos at anywhere from a 100mm focal length to the lens' maximum of 400mm. The 7D Mark II has 63 focus points, with myriad combinations possible. For larger birds, especially flying ones, I like to use a tight grid of five active focus points.

A big challenge with gulls on a sunny day is overexposure. I almost guarantee that if you leave your camera in full auto, or any other setting with the exposure at neutral, you'll end up with blown-out overexposed images. The gleaming white on the birds really causes significant light blowback. For most of these images, the exposure compensation was dialed down a full stop, sometimes a bit more, sometimes a bit less. 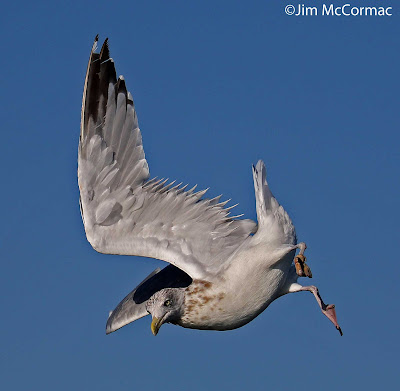 Trying to capture the birds in some sort of action pose is great fun, and rewarding when you strike the target. This Herring Gull is in the midst of a quick midflight contortion as it augers into the feeding flock below. A really fast shutter speed is imperative if one hopes to stop the action. It's also important to always remain cognizant of the sun's position, and keep it behind you. 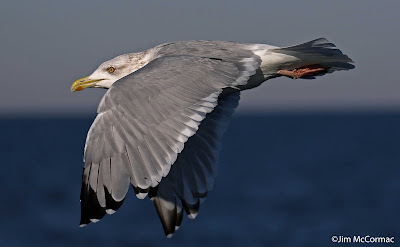 An adult Herring Gull passes by, showing off its glaring yellow eye and pink legs. 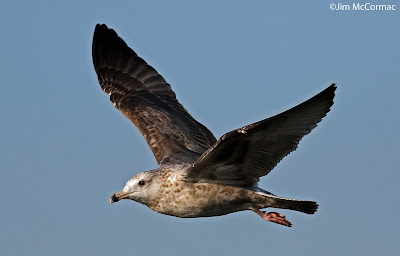 This is a first-cycle Herring Gull - a bird in its first year of life. It looks nothing like the adults, and I suppose many nonbirders see mixed flocks of gulls of various ages, and think that the young birds are different species. 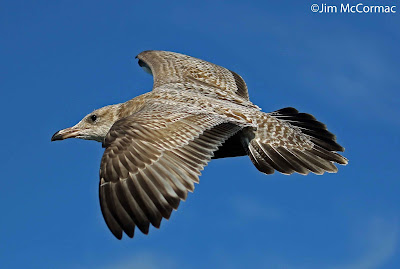 This first-cycle Herring Gull floated by so close to the boat that I didn't even have to zoom the lens - this image was taken at 100mm. As always, click the image to enlarge. The detail in the bird's feathers is ornate indeed. 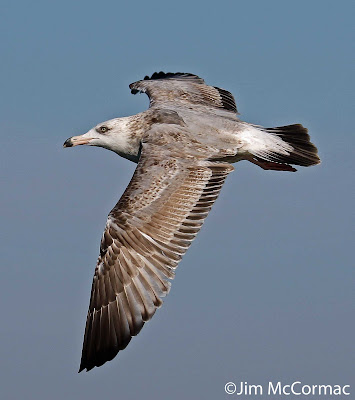 The boat's attendant swarm of gulls offered an outstanding opportunity to not only study the various age classes of Herring Gulls, but also the variation between individuals of the same age. This is a second-cycle bird. 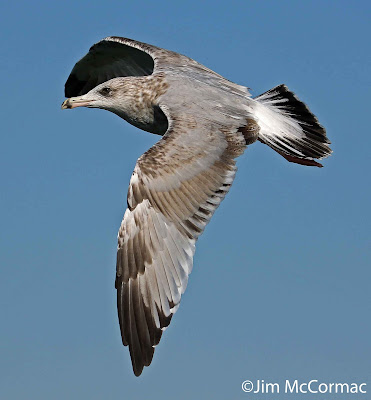 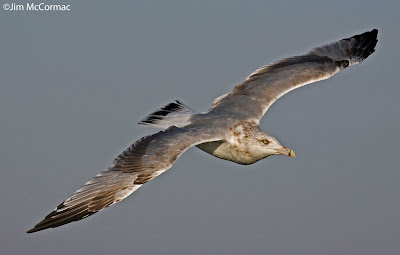 This, I believe, is the same individual as in the previous photo, but in different light and at a different angle. 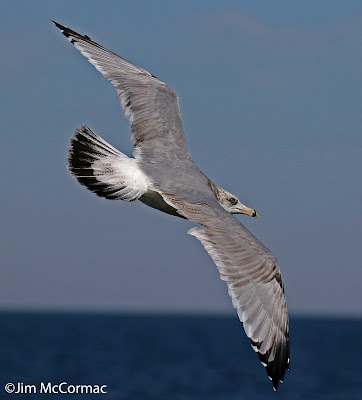 And finally, I believe this must be a third cycle Herring Gull that has mostly molted in its gray mantle, but still retains a broad black tail band.

Whatever you call them, gulls are fun to watch, and great practice for in-flight bird photography.