Some shorebirds, at Funk 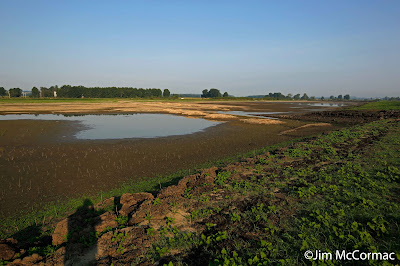 Mudflats and shallow pools blanket the landscape just south of Funk Bottoms Wildlife Area in Wayne County, along the north side of Wilderness Road. An active peat mining operation has temporarily created good shorebird habitat, and reports of shorebirds have been coming in from this area for a few weeks. Last Sunday, I was finally able to get to this spot and observe some waders, and make a few images.

Great views of the birds can be had from the dike running along the east side of the wetlands, but a spotting scope is highly useful. The photography conditions are OK, but not great. For the most part, unless you are armed with Canon's 800mm lens, most birds are a bit distant for really excellent images. That, compounded by a less than desirable angle of view stemming from standing atop the dike, means that only the closest birds can really be nailed well. I was shooting with my 500mm with the 1.4 teleconverter on a Canon 7D Mark II 1.6 crop sensor camera, and still didn't like most of my results of the often too distant birds. Another issue with shooting distant shorebirds on broiling mudflats on baking mid-summer days is the heat waves between you and your subjects. The closer one can be, and the less cropping that needs to be done to the photos, the better.

But shoot the birds on their terms, and that means not impinging too closely and causing them to flush. Most of these animals have come a LONG way, and don't need the unnecessary hassle of some photographer spooking them. Many shorebirds can be quite tame and confiding, and with a bit of patience one can let them approach on their own terms. That's how I got these shots - by waiting quietly in good locations, and letting birds eventually settle into my side of the wetland. 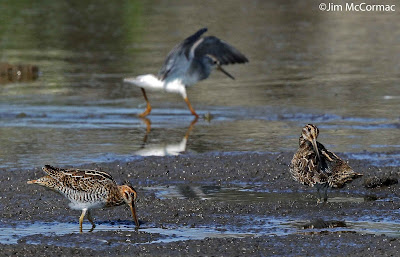 A Lesser Yellowlegs, Tringa flavipes, appears to engage in interpretive dance in the backdrop. The pair of Wilson's Snipe, Gallinago delicata, seem unimpressed. By mid-August, southbound shorebird migration is picking up steam. Many of the sandpipers and plovers that we see this time of year nested FAR to our north, even in the high reaches of the Arctic. They get but one crack at pulling off a nest. If something causes their nesting attempt to fail, the adults often just head back south. Some southbound adult shorebirds can appear here by early to mid July.

Mid to late August migration sees the overlap of adult and juvenile birds, too, which makes for great study. The snipe on the left is a brightly colored juvenile resplendent in a fresh coat of feathers. The other snipe is an adult. Its feathers are duller and more worn. In general, especially as concerns the shorebirds that breed in the far north, the adults return in advance of the juveniles. 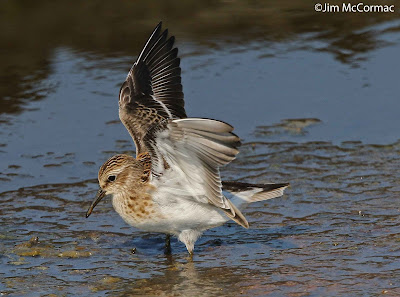 A Least Sandpiper, Calidris minutilla, flutters to balance in deep muck. These tiny sandpipers are one of the so-called "peeps", which can be frustrating to identify as the various species look similar. The Least Sandpiper is one of our most common peeps, along with the Semipalmated Sandpiper. Don't let their diminutive appearance fool you. These are tough birds, breeding where the Polar Bears roam. Ohio is but a temporary way station on their very long migrations. 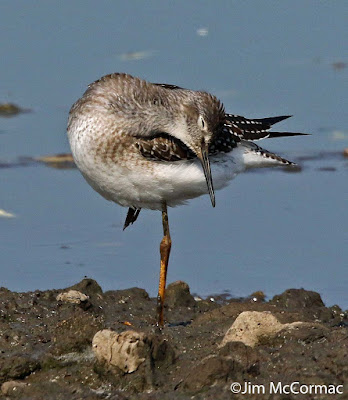 While I was standing in an especially nice spot, this graceful Lesser Yellowlegs was kind enough to fly in to the closest shore and set about preening itself. That behavior allowed me to capture some interesting poses. 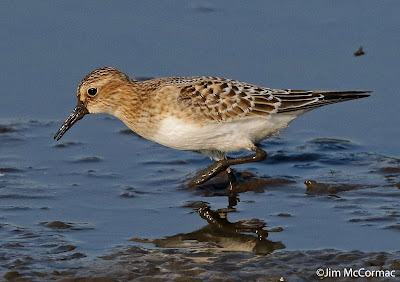 A highlight was several Baird's Sandpipers, Calidris bairdii. This is another of the aforementioned "peeps". Baird's Sandpipers are never particularly common in Ohio, and the chance to study one at close range is always gratifying. This individual is a juvenile, as evidenced by its prominently fringed feathers and neat adobe earth coloration. At least two others were present during my visit.

This animal weighs little more than an ounce, but it is one of the world's champion migrants. Baird's Sandpiper nests in the highest reaches of the Arctic, and winter in southern South America. Some of them travel over 9,000 miles between summer and winter habitats. Conservation and appropriate management of wetland stopover sites is of vital importance to successfully protecting populations of birds such as this species. CLICK HERE for a brief essay that I wrote about the value of mud, and the possible roles that long-haul migrant shorebirds such as Baird's Sandpiper may play in the distribution of certain plant species. 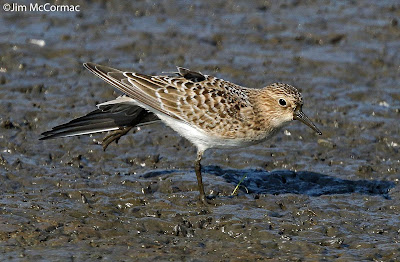 Those wings are made for flying! Of the five regularly occurring "peep" sandpipers in Ohio (Baird's, Least, Semipalmated, Western, White-rumped), two have exceptionally long primary flight feathers. This juvenile Baird's Sandpiper was good enough to stretch for my lens, revealing its super long wings that extend well beyond the tail. It and the White-rumped Sandpiper literally travel from one end of the earth to the other each year, and both species have evolved the long wings with greater surface area to help them achieve these incredible journeys.

In a few short weeks, this sandpiper is likely to be foraging in a wetland near Tierra del Fuego, Argentina. The annual movements of shorebirds around the globe is truly one of the marvels of avian migration.