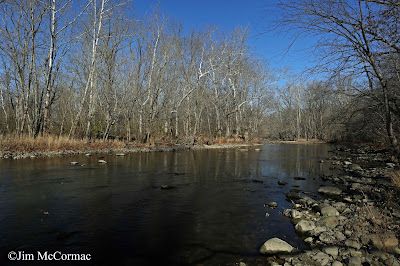 Were you seeking caterpillars, this wooded riparian corridor would be a great place to do so. Those of us that hunt caterpillars would likely follow in the footsteps of the birds, and search the foliage of streamside shrubs, trees, and various herbaceous growth.

Who would think to wade on in, and check submerged rocks for caterpillars?! 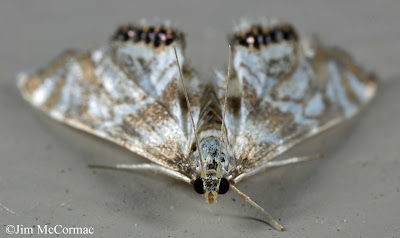 The moth is not even the size of your thumbnail, so we're talking pretty dinky here. Note the summit of the hindwings. They glisten with small colorful dots. Seen from the right angle, especially from the rear, those can look remarkably similar to colorful spider eyes.

But the real proof lies on the moth's mode of locomotion. CLICK HERE for an amazing video of this species, taken in Ohio by David and Laura Hughes.

Anyone familiar with the jerky rapid hopping gait of a jumping spider will quickly see the astonishing similarity in how the moth moves. Other species of moths do the same, and the aforementioned David Wagner and colleagues proved that they actually are mimicking jumping spiders. In the following video, they've put a metalmark moth (one of the other spider mimic moths) in a box with a real jumping spider. The moth's movements and bold displays of its eyespots spook the spider into submission. CLICK HERE to see for yourself.

Why would a moth evolve such a fabulous mimicry? No doubt because jumping spiders are voracious and abundant predators of small insects, including moths. If you rest on the upper surface of a leaf during the day, chances are good that sooner or later a patrolling jumper will come along and try to make a meal of you. But it's a lot less likely it actually will if you look like a bigger, badder jumper. 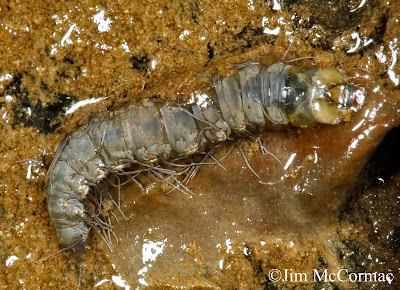 Well, this tale gets even weirder. At the recent Mothapalooza, Laura Hughes was kind enough to bring along some of the caterpillars of the Two-banded Petrophila moth. Laura is an aquatic ecologist with the Ohio EPA, and spends much time in streams. She also knows more about aquatic entomology than anyone I have ever met. Anyway, I had asked her if she'd capture a few Petrophila larvae the next time she encountered some, and let me make photos.

Voila! That's the beast above. While it may look large in the photo, it's really just a quarter-inch or so in length. The Petrophila caterpillar spins a tubular silken case on the rock, which is submerged in the shallows, and rasps algae from the rock's surface. The threadlike hairs are not hairs at all - they are filamentous gills that allow the caterpillar to harvest oxygen from the water.

Apparently the adult female moths will even dive into the water to deposit eggs on submerged rocks. While I'm sure there are underwater predators that occasionally take these caterpillars, they are certainly much safer from the legion of terrestrial predators such as birds, parasitoid wasps and flies, and other predatory insects.

You just can't hardly make this stuff up.

I found this post while I was looking for information on the Petrophila moths - I found a moth-spider mimicry in my back yard. Now that I know they're water-dwellers, I may have to go down to the creek in back and see if I can get a picture of the caterpillar!