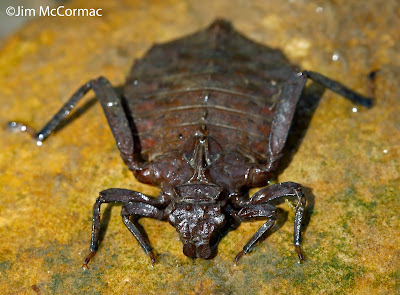 The first column I wrote for this newspaper — appearing Aug. 16, 2005 — was about the dragon hunter, our largest species of dragonfly.

Hagenius brevistylus, as the dragon hunter is formally known, is a brutish insect. An adult can measure 31/2 inches. Comparatively small eyes cap a beefy, broad-shouldered thorax. Long, powerful, spiny legs seize prey, which the dragonfly plucks from the air.

Dragon hunters are extreme aerialists, putting on Ferrari-like bursts of speed and jagging with mind-numbing quickness. They use their skills and power to overcome big victims such as swallowtail butterflies and other dragonflies almost as large as themselves.

A large part of the dragon hunter’s mission is to make more dragon hunters. When a male encounters a willing female, he roughly grabs her by the head and mates with her. The courtship is Neanderthalish, no gentle New Age insect here.

Dragon hunters and their ilk have been around for about 300 million years.

The female dragon hunter deposits her eggs in the still waters of high-quality streams. Those that hatch produce a larva known as a nymph. The nymph is even more ferocious than the winged adults, if that’s possible. It is longer-lived, too. The nymph stage can last for several years, while the adult dragonfly might live a few months.

On a recent trip to Little Darby Creek, Anthony Sasson of the Ohio chapter of the Nature Conservancy and I trawled up a dragon hunter nymph. I was excited to handle one, as I’ve seen the adults several times but never the completely aquatic larva.

A dragon hunter nymph is a leaf come to life, a horror show for lesser aquatic beasts. The quarter-size larva lurks in leafy detritus on the stream bottom. It blends perfectly with its surroundings.

When a victim happens along, the dragon hunter shoots out its lower “lip” (technically a labium) as far as one-third its body length in fractions of a second. A pair of toothed appendages at the lip’s terminus seizes the prey and yanks it back into the maw of the murderous larva. The victim, which might be a caddisfly larva, worm or even a small fish, has no time to react.

When it comes time to shift position, the dragon hunter nymph employs an odd style of locomotion. Its gills are in its rectum. By pushing water through the gills and out its rear in forceful blasts, the strange beast can jet itself about quite handily. As with the adult’s mating habits, such behavior would be considered rather crass among humans.

Dragon hunters are one of myriad interesting animals that depend upon streams with high water quality. Their presence means a healthy ecosystem.

The Big and Little Darby creeks are the crown jewels of central Ohio waterways and foster legions of animals that fire the imagination.

Naturalist Jim McCormac writes a column for The Dispatch on the first and third Sundays of the month. He also writes about nature at www.jim mccormac.blogspot.com.
at May 17, 2015

There's another one I haven't seen! I better get out more...

That thing id definitely going to give me nightmares.

Thanks so much. My son found one in a creek in Indiana and he thinks its his pet. It took me hours of internet research to find this blog. I was afraid we would have to wait until it matured to find out what kind of nymph it was, but I wouldn't have known what to feed it.

Thanks so much! My son found a nymph in a creek and is obsessed with it (he is 3). It is his pet. It took me hours to find this. I was afraid it was a toe biter nymph, because that was the closest I could find, but I was not at all satisfied with that conclusion. It is really hard to research nymphs on the internet without half naked water women showing up.