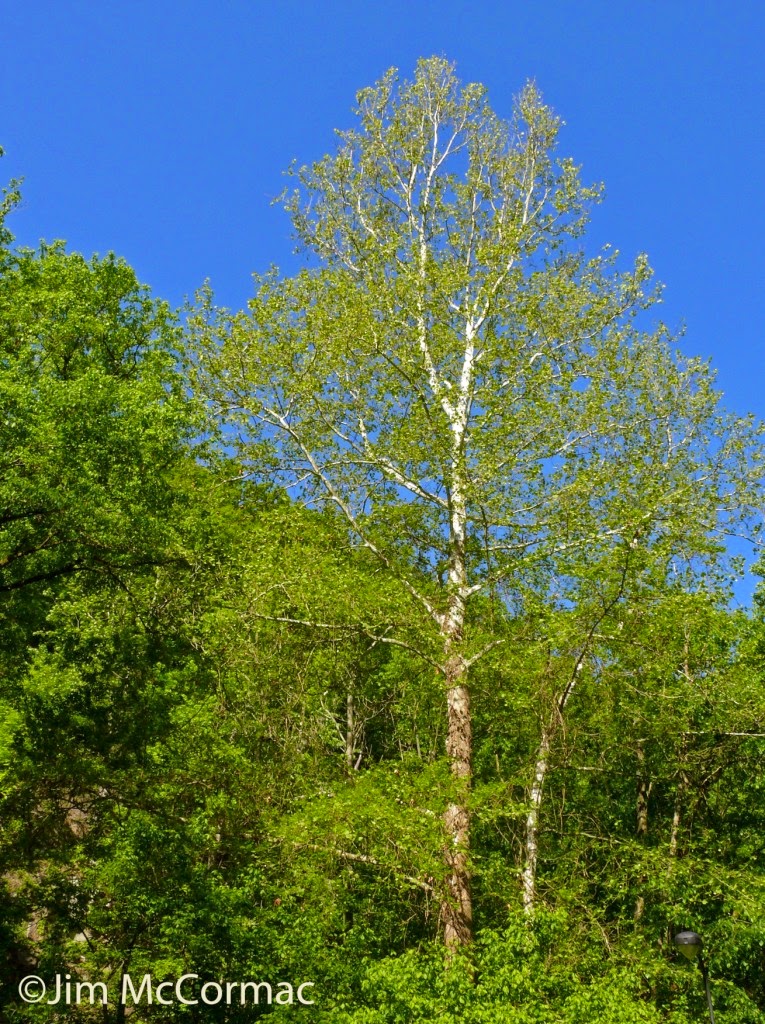 A stately Sycamore, Platanus occidentalis, rises from rich alluvial soils along a stream. White and brown barked Sycamore trees are easily recognized, and are the most conspicuous tree that defines the channels of creeks and rivers. They also play host to a variety of wildlife, some of which are Sycamore specialists, such as the beautiful Yellow-throated Warbler (at least in this part of the world). 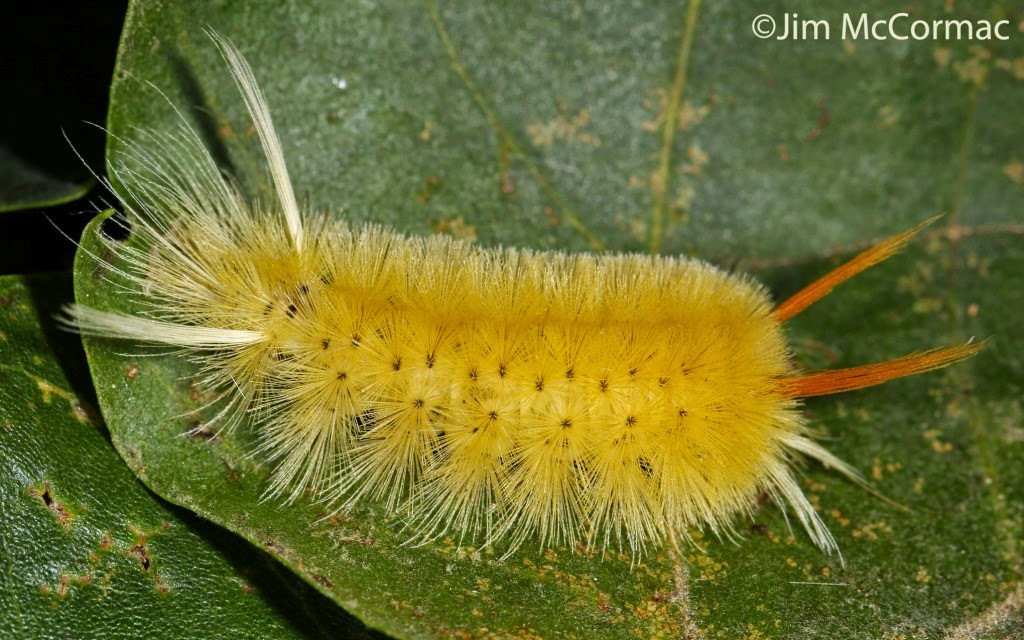 While far less obvious than the aforementioned warbler and much better at hiding, this furry caterpillar is even more of a Sycamore associate than the warbler. It is a Sycamore Tussock Moth caterpillar, Halysidota harrisii. Insofar as I know, Sycamore is its only host plant.

I got an email a week or so back from a work colleague, Katie Thierolf, letting me know that she had seen numerous of these caterpillars at the state fairgrounds. Being unable to make a trip down there, I implored her to wrangle some of the cats into a jar, and bring the captured livestock back to the office so I could make some images. She did so - thank you Katie! - and some of the images and a story follow. 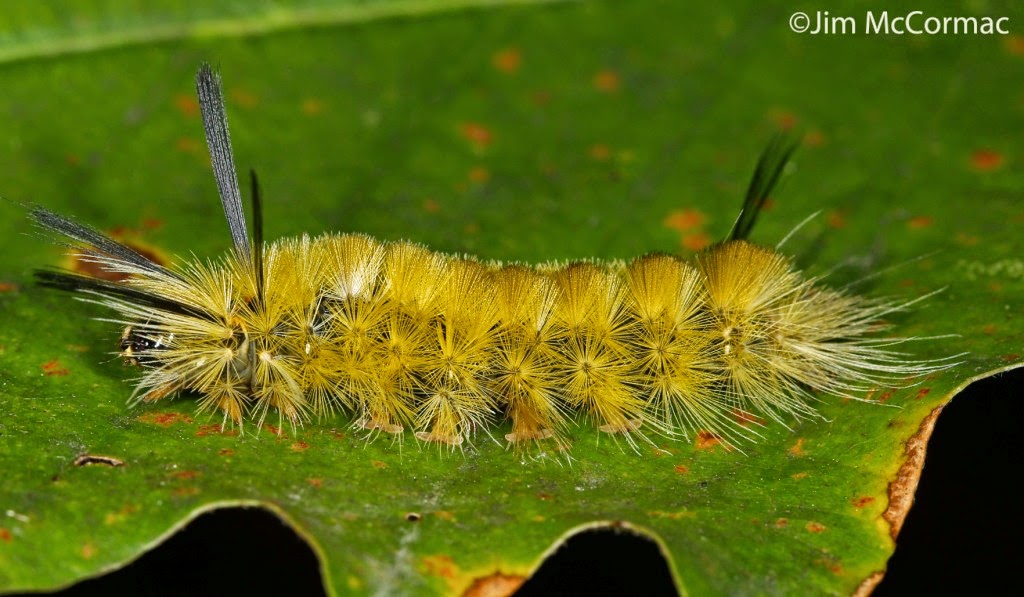 Sycamore Tussocks might be mistaken for the far more wide-ranging Banded Tussock Moth caterpillar, Halysidota tessellaris (above), which feeds on a great variety of plants. However, the caterpillars are easily distinguished by the color of their lashes - whitish to cinnamon-brown in the Sycamore; black in the Banded. Sycamores also have a denser furrier appearance to me, perhaps because their clumps of setae (hairs) are more tightly spaced. So the two species of caterpillars are easily separated. Not so the adult moths, as we shall see. 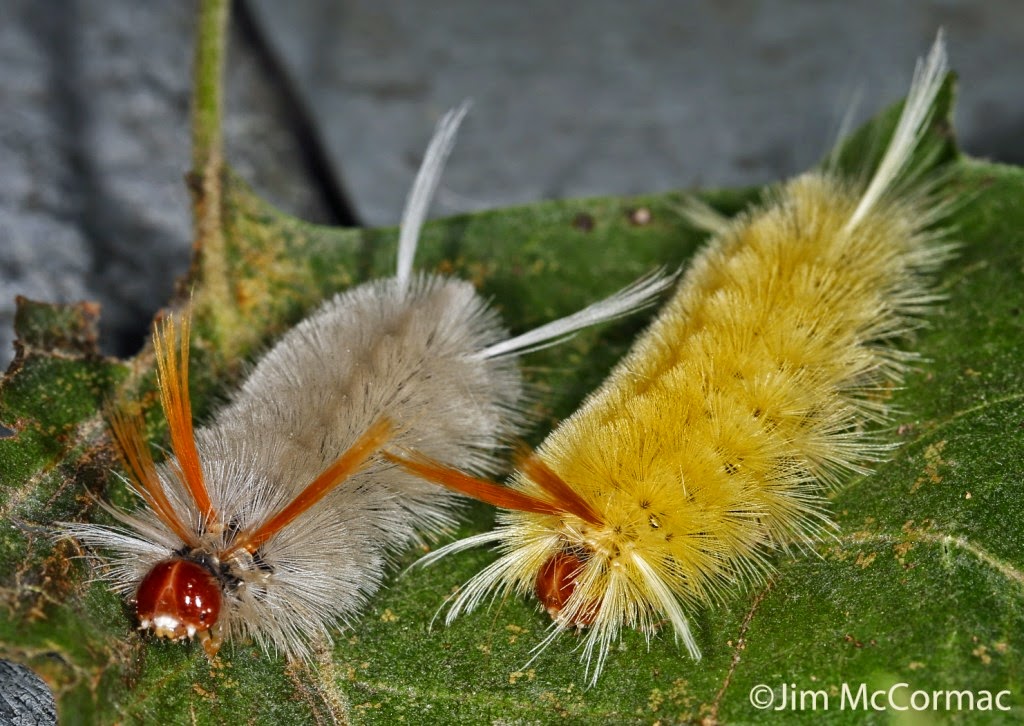 Sycamore Tussocks are interesting in that they have great color variation - one might think these were two separate species. A crop of eggs can produce caterpillars that range from lemon-yellow to gray to white. 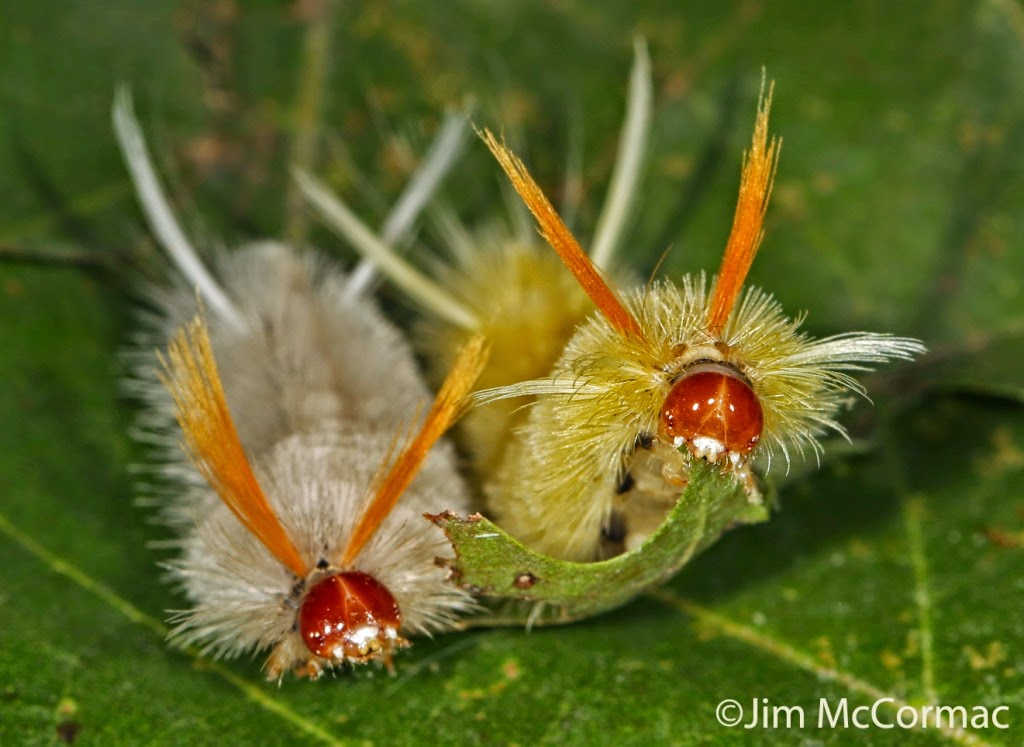 It took a bit of wrestling around with these guys, and a lot of wasted shots, but we eventually managed some nice side by sides. These are handsome beasts by any standard of furry tubular beauty. 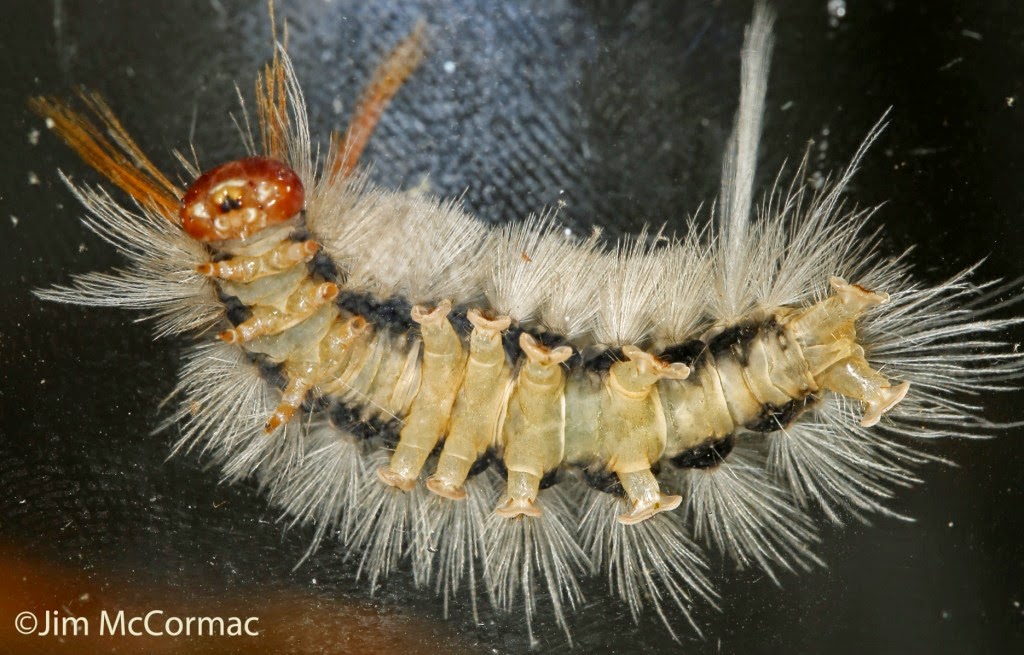 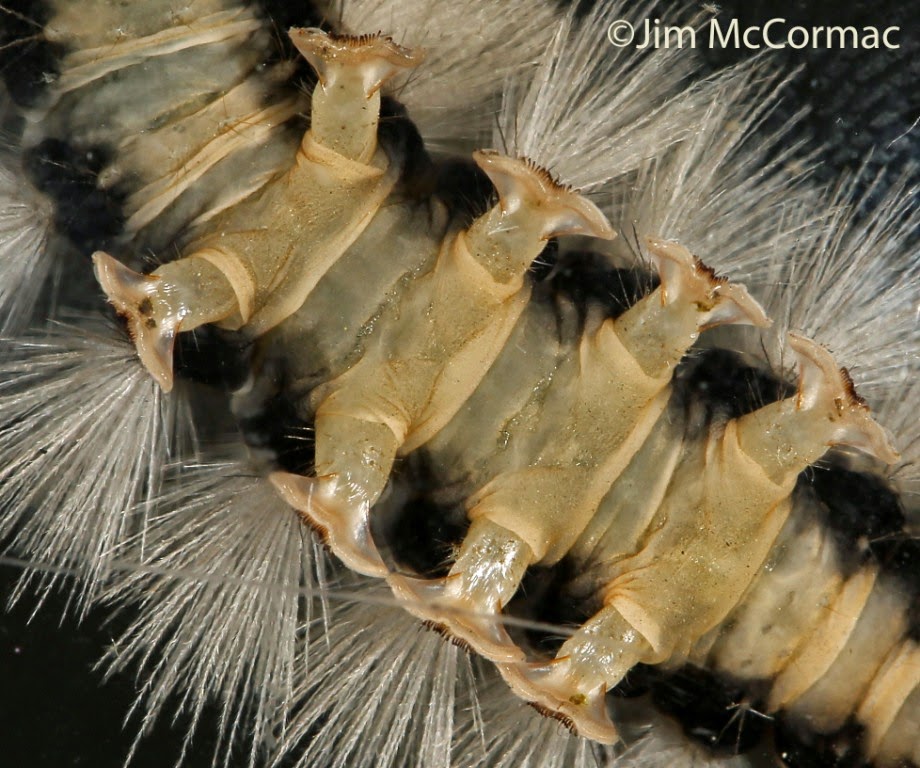 In tight on the anterior prolegs, which are extremely grippy. These powerhouse gams do the bulk of the work when it comes to securing the caterpillar to twigs or foliage, and their sticking power is astonishingly strong. Just think about a brutal thunderstorm with attendant gale force winds. The caterpillar must do its best to ride out such storms and remain in the tree, and these legs are how they do it. 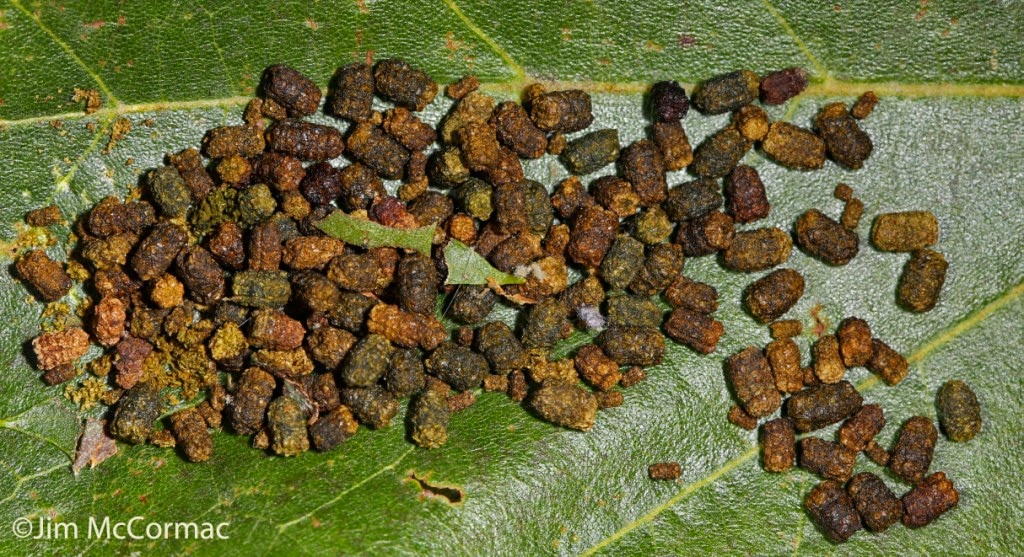 Katie brought me the caterpillars towards the end of the day, and their photo shoot had to wait until the next day. The three cats were secured in a large jar and well provisioned with fresh Sycamore foliage. Caterpillars essentially do two things - eat, and poop. In Lepidopteran parlance, caterpillar poo is known as frass, and the pile of frass above was generated overnight by the trio. 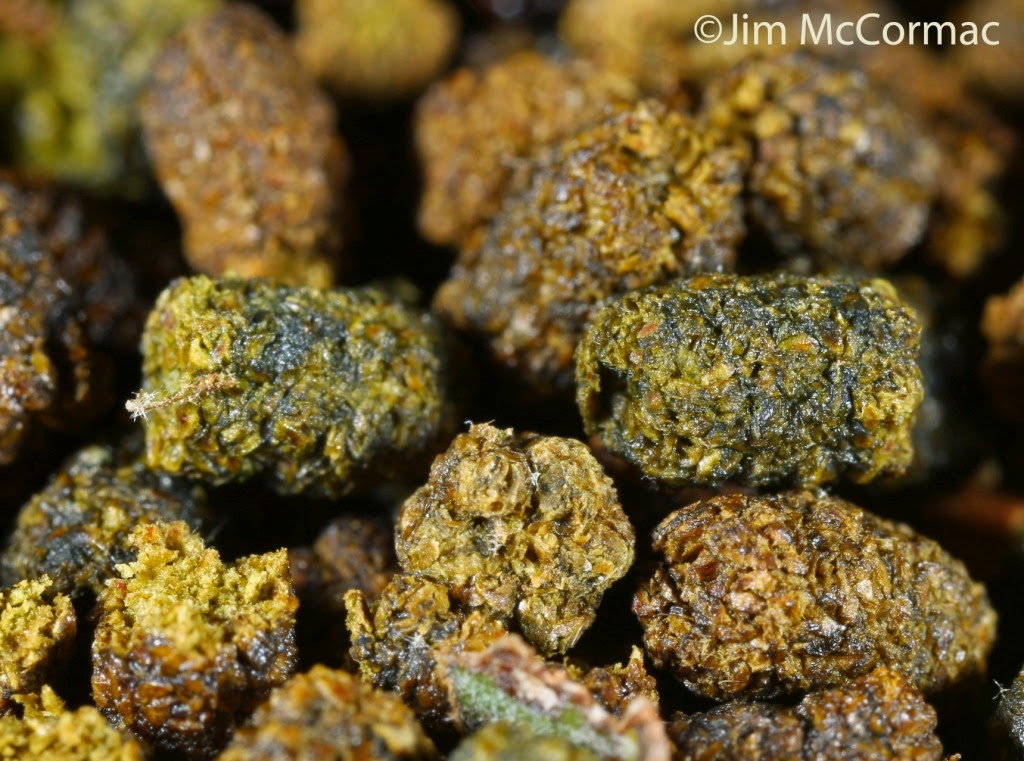 We go in tight on the frass, just because we can. It looks like tiny rabbit pellets. Believe it or not, there are small animals that mimic the look of frass pellets to perfection, and I just happen to have some good photos of one of these beasts, made last weekend. If not preempted by something cooler, I'll share that critter in the next post. But then, what could possibly be cooler than an animal that is the mirror image of a frass pellet? 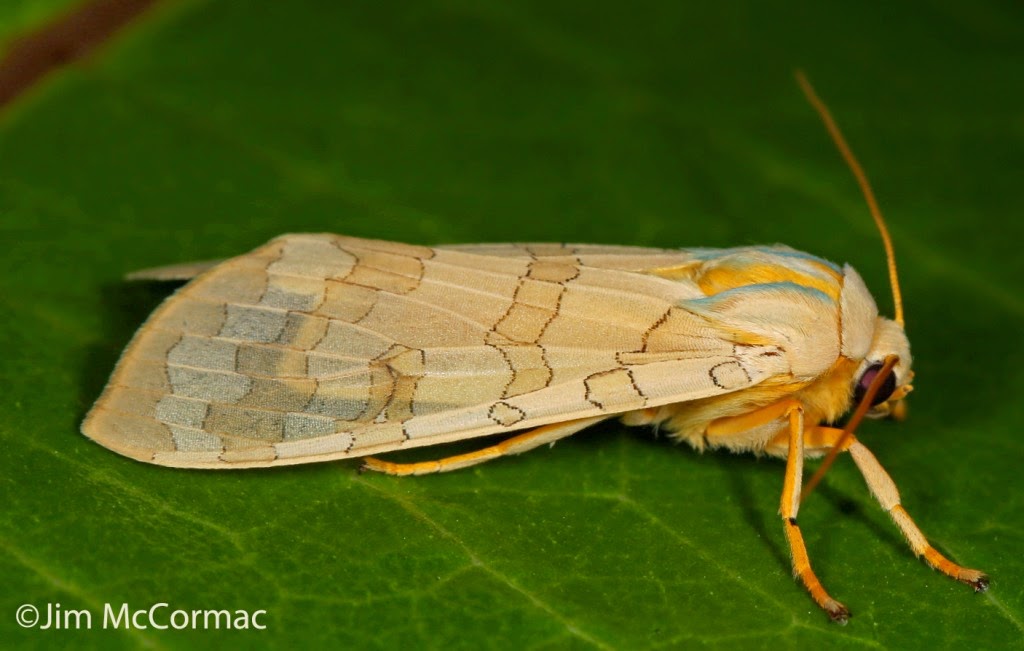 I mentioned earlier that Banded and Sycamore Tussock Moth caterpillars are easily told apart, but the moths that they morph into are not. If the moth above came to the attention of most moth enthusiasts, I suspect that they would call it a Banded Tussock Moth, in part because that is the species included in field guides. But the Sycamore Tussock Moth is identical in appearance. Insofar as I know, no one knows how to tell the two apart except by a minute examination of the genitalia, even though it is easy to differentiate the caterpillars. So to be technically accurate, one must pronounce such a moth a "Banded/Sycamore".

Rachel Shoop, a biology student at Marietta College, is studying the DNA variation in these species. Perhaps, as part of her work, she will also unearth morphological characters that will enable us to visually separate the two. Such knowledge will make life more satisfying for moth-ers at the mothing sheets.

Oh, the caterpillars used in this shoot were released into a Sycamore tree at our office complex. Hopefully they will establish a local colony of Sycamore Tussock Moths.

Really enjoyed this post. I haven't come across either of these species (yet), but I can always hope. Interesting that the adults of the two different species are so similar in appearance.

we had one of these moths today in NJ.... reading your blog saved me the task of looking it up... thanks. We also had a caterpillar covered with eggs, being parasitized by something...

Very informative, James! Thanks for sharing!

I'm so happy to know what these are. I live in Oklahoma, and while looking up info on our horrendous webworm infestation, I thought I would try to research these little cuties. Ours are all in the white to gray color range. We called them "yeti worms," and will probably continue doing so in spite of our new enlightenment. Also, our version of the adult moth is grayer. I am glad to know we can just let them be. They're quite entertaining. The tiny baby worms spin down from our giant sycamore on long streamers of silk, and then crawl through the grass. They must eat as they go, because they emerge as much larger worms, inching up the side of the house and back to the tree branches overhanging the roof. I'm not sure what purpose this serves, but it gives us something to watch throughout September.

I also live in Oklahoma and my parents have had these caterpillars on their sycamores for years. They have been just an annoyance crawling and pooping on the patio but over the years their numbers have grown and this year there are hundreds if not thousands crawling on the patio furniture, bricks doors, etc. One crawled down my 80 year old mothers blouse and she ended up with a few itchy welps. They are planning to have their extremely large trees sprayed next year to rid themselves of these formerly cute but now creepy pests.

Just saw one in Robbers Cave State Park, OK (Wilburton, OK). I took a pic and it definitely matches yours. I wondered if it was a poisonous one. Glad I didn't touch it.

I just discovered one on my patio furniture and found this blog after much searching. I have a huge sycamore tree in my backyard. I wondered if it was an asp or poisonous. Thank you for the info you provided. Itchy welps is enough for me!

How can I download a video of the caterpillar you are talking about. It was on my truckin the Airport Parkinglot in Albany Ga. my email is

Find these caterpillars beneath my sycamore trees, on my deck. Put them on the trunk of the tree, leaves too high to reach. Cats travel up the trunk. Nice to know name and food source.

I'm wondering if the gripping power of these little guys fits with a little cutie that hugged the side of my car and tode about 2-3 miles with me in CT. I have a great photo if you are interested.

I use to have a large climbing tree filled with them. I raised many as a child. Never been stung by one. They're very soft and cute. Easy to raise as well.