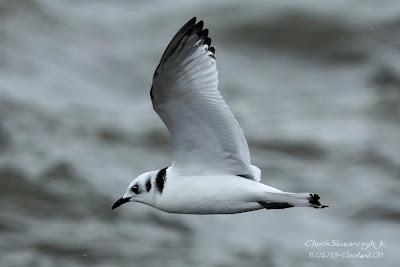 They've been finding great birds galore of late along Cleveland's Lake Erie coast, many of them practically in the shadow of the Cleveland Browns stadium. Chuck Slusarczyk, ace photographer who has shared his work with us many times, sent along some images of the latest batch of rarities. Viewing Chuck's work made me pine for a trip to the lake, but at least his images allowed me - and you - to live vicariously through his camera's lens.

Above, a first-cycle Black-legged Kittiwake, Rissa tridactyla, showing its distinctive sooty collar. Kittiwakes are mostly pelagic (ocean-going) and we get precious few of them in Ohio. In fact, this bird was Chuck's first kittiwake, along with many others, no doubt. We probably get far more kittiwakes than are seen, but most probably blow right down the middle of Lake Erie on the way to the Atlantic, and are never seen. Once in a while, one has the good matters to come to shore and hang loose for a bit, as this one did.

Other than a small percentage of the population taking a brief Great Lakes hiatus while in transit, Black-legged Kittiwakes are seldom out of sight of the sea. They nest on cliffs overlooking the sea, and winter at sea. This towering rock face is on St. Paul Island, Alaska, which is one of four islands that form the Pribilofs. I made this photo during a June 2010 trip, and I can tell you that this is a cold place. Kittiwakes thrive in cold environments, and spend that vast majority of their lives in wet frosty conditions that would kill you or I in short order.

The ledges of this cliff are festooned with nesting Black-legged Kittiwakes. Being that this is St. Paul Island, there are much rarer Red-legged Kittiwakes mixed in, but most are the former. There aren't many safer nesting spots. Would-be predators will have a tough time accessing kittiwake nests.

This was one of my more surreal experiences on St. Paul. Kittiwakes, gathering moss from the tundra in pea soup thick fog. This is one of few times that kittiwakes purposely alight on flat ground away from the water. As we stood there, taking in the scene, ghostly kittiwakes would materialize from the fog, bills full of moss, flying to the distant coast and their nesting colony.

Kittiwake-harvested moss goes to good use - it provides the birds with fodder to build these bulky cups. Few gull chicks have it as good as the kittiwake chicks. The specific epithet of the Black-legged Kittiwake - Rissa tridactyla - means "three toed". They actually have four toes, but the hind digit is greatly reduced, apparently an adaptation to better improve the birds' ability to stand on narrow cliff ledges such as this.

This is an adult Black-legged Kittiwake, and we never see this plumage in Ohio. All of them are young birds, such as in Chuck's shots. Supposedly there are four records of adults from Lake Erie, but I don't know any details...

The adults are gorgeous black, gray, and white gulls. Very neat and long-winged, the wingtips appearing as if dipped cleanly in a vat of ink. They are wonderful flyers, too - far more at home in the air than anywhere else. I made this image from atop a tall sea cliff, while kittiwake after kittiwake streamed by below, effortlessly riding the turbulent air currents blasting off the sea and smashing into the cliff. If Jonathan Livingston Seagull were real, he'd be a kittiwake. 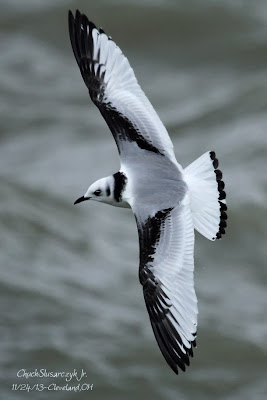 If all goes well in the kittiwake nest high on a cliff ledge, this is the result. A strikingly marked juvenile, as in this beautiful image by Slusarczyk. The bold black bands on the wing form a rough W, and the inky-tipped tail band and charcoal neck collar provide punctuation. I've seen four or five of these in Ohio, and they've all jumped out visually from the pack of associated gulls. The best kittiwake find I made was a bird on the Scioto River in downtown Columbus, years ago. Ohio kittiwake records are few and far between away from our Great Lake. 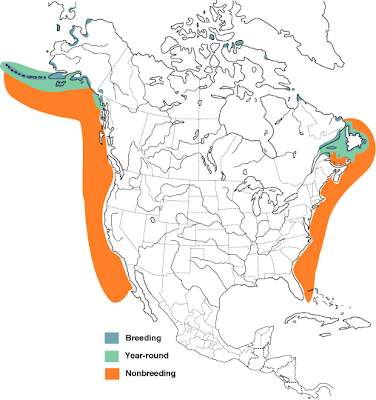 It would be most interesting to know the origins of Lake Erie kittiwakes. This species has a split breeding distribution in North America. There are the birds that breed along the Alaskan coastline and island chains, and there are populations centered around the Gulf of St. Lawrence and adjacent Newfoundland on the other side of the continent. There are also disjunct scattered populations breeding in the high arctic of Canada, due north of Hudson Bay. The St. Lawrence populations have expanded greatly in the past 40 years; I'm not sure if the high arctic colonies have also increased.

So, Chuck's immature Black-legged Kittiwake may have wandered into the Great Lakes from the east, by following the St. Lawrence River, forging through Lake Ontario, passing over the falls at Niagara, and eventually finding itself on Lake Erie in the Rock & Roll Hall of Fame's backyard.

Better yet, and a far wilder journey but not an implausible one, is that the kittiwake originated in one of the high arctic colonies. If so, it likely made its way south through Hudson Bay and into James Bay, aerially portaged across the landmass between there and the Great Lakes, and entered our waters. If so, what a trip! That young kittiwake would have traveled nearly 2,500 miles to reach Cleveland! I think that other species of seabirds that are rare on Lake Erie, such as jaegers, travel a path similar to the one outlined above.

Presumably, the Alaska breeders winter in the Pacific off the west coast and it's unlikely those birds would appear here. But, there is another possible point of origin. Many kittiwakes that breed in northern Europe make their way across the Atlantic to our offshore waters, especially young birds. Some of these juveniles stay on this side of the Atlantic for their first year, before heading back to breed when mature. I suppose it's possible that one of these European kittiwakes could make its way to Lake Erie. My money is on the high arctic birds, though.

However this kittiwake came to be in Ohio, it has thrilled many a birder and we're glad to have it. Thanks as always to Chuck for sharing his work, and check out more of his images HERE.

Thank you for the detailed, illustrated lesson about the Kittiwakes. I really appreciate the context you've provided for Chuck's outstanding photographs. Now I really understand why this bird's appearance here in Cleveland is so significant!